President Trump Wants North Korea to Give Up Nuclear Weapons. Here's Just How Hard That Would Be

Though the actions are an apparent sign of goodwill ahead of Tuesday’s historic summit in Singapore between Kim and President Donald Trump, analysts say the destruction scarcely impacts the vast weapons complex assembled by the North Koreans over the last three decades.

Delivering any sort of blow to Pyongyang’s sprawling missile and nuclear weapon infrastructure will take a herculean, years-long effort — the likes of which have never been seen before. No nation that has amassed such an arsenal has ever given it up. So many arms control analysts are curious to see how the Trump Administration will achieve their stated goal of a “verifiable and irreversible denuclearization” of the Korean Peninsula.

“We’re going to have to learn to live with North Korea’s ability to target the United States with nuclear weapons,” said Jeffrey Lewis, an analyst with the James Martin Center for Nonproliferation Studies Middlebury Institute of Strategic Studies. “They aren’t going to give up their missile program or their nuclear weapons. It’d be like asking the Golden State Warriors to give up their NBA championships.”

Even if North Korea did disarm, the process would take years. Siegfried Hecker, former director of the nuclear weapons design center at Los Alamos, N.M., and now a professor of management science and engineering at Stanford University, is one of the few foreigners to have toured North Korea’s major nuclear facilities. He coauthored a new study on the issue that estimated it could take six to 10 years in a multi-step deal to eliminate the nuclear threat.

Any deal would almost certainly involve an army of international inspectors visiting hundreds of military and nuclear sites to pore over equipment, documents, and personnel to verify compliance. That would be a tall order for any country, let alone North Korea, which is so isolated from the rest of the world it’s derisively known as the “Hermit Kingdom.”

North Korea initially committed to “abandoning all nuclear weapons and existing nuclear programs” during the co-called Six–Party Talks in 2005 but that feel apart amid demands for a rigorous inspection and verification regime. Few assume Tuesday’s summit will produce such an unprecedented agreement. The sit-down between the two nations’ leaders will, hopefully, lead to future conversations while simultaneously reducing tensions.

“This will be — at a minimum, we’ll start with, perhaps, a good relationship,” Trump told reporters on Thursday. “And that’s something that’s very important toward the ultimate making of a deal.”

Much has changed in the U.S.-North Korea relationship over the last few months, as personal insults have been replaced diplomatic praise. But it has been North Korea’s technological advancements, particularly over the past two years, that have driven the nations together.

Under Kim, the country relentlessly pursued it toward its military goal of being able to unleash a nuclear strike on the U.S. and its allies. North Korea is now believed to have a dozen or more nuclear warheads and an arsenal of several hundred short- and medium-range ballistic missiles capable of hitting South Korea, Japan, along with U.S. military bases and territories in the region. Pyongyang also has developed long-range missiles that can range every major city in the continental United States.

North Korean state-run media says the nation now has a standardized nuclear weapon design with warheads small enough to be affixed atop ballistic missiles. The nation has not yet demonstrated a fully functional reentry vehicle, which carries the warhead atop the ICBM, capable of surviving the searing heat, pressure and vibration of falling from space back to Earth. Nor have they shown an ability to hit a target with precision, but they have demonstrated enough advancement to be treated as a full-fledged nuclear weapons state.

North Korea’s string of 23 missile launches last year posed serious national security concerns for the U.S., including two ICBM launches that climbed to new heights in outer space — several times higher than the International Space Station. The two launches only went a short distance but if their astronomical trajectories were flattened out, the missiles would be capable of hitting nearly all of the United States. Meanwhile, North Korea continued to develop medium-range ballistic missiles that are driven on a mobile launcher into a remote area, blasted off, and delivered to their targets. The weapons are considered deeply destabilizing to Asian allies because of their capability to launch a devastating strike without early warning.

Several of the tested missiles fell in the sea just a couple hundred miles off the coast of Japan, and several of them completely flew over the northern part of the country. North Korea simultaneously launched four Scud ER missiles, with a range of more than 600 miles, in March 2017 toward Japan. The goal of the highly choreographed test appeared to demonstrate the ability to overwhelm defense systems, according to Narushige Michishita, a former Japanese Defense Ministry official who teaches at the National Graduate Institute for Policy Studies in Tokyo.

“Japan’s ballistic missile defense systems can take on one incoming missile relatively easily,” he said. “But if there are four missiles coming at it simultaneously, it would be not easy to shoot all of them down.”

North Korea does appear to have slowed down its overt testing efforts, which may be a result of Trump’s “maximum pressure” campaign, or, some a reflection that Pyongyang has learned what it needed to learn from its missile tests last year and is secretly working on another aspect of the program.

After decades of defying international pressure to hold off on additional weapons development, North Korea has yet to test-launch a missile in 2018. By this time last year, North Korea had carried out 12 tests.

Robert Gallucci, a professor at Georgetown University who led 1994 talks with North Korea for the Clinton administration, told reporters last week in a call organized by 38north.org that the “de facto moratorium” was good news. He cautioned, however, that the world must remember that Pyongyang made these technological strides by going rogue against an international effort to stop them.

“If we embrace [the moratorium] with too much enthusiasm, and that becomes the standard for success, in my view we will be making a mistake,” he said. “We should not legitimize the North Korean capability by accepting the status quo as a situation in which we can then proceed to normalization of relations with this country, that has nuclear weapons and ICBMs.” 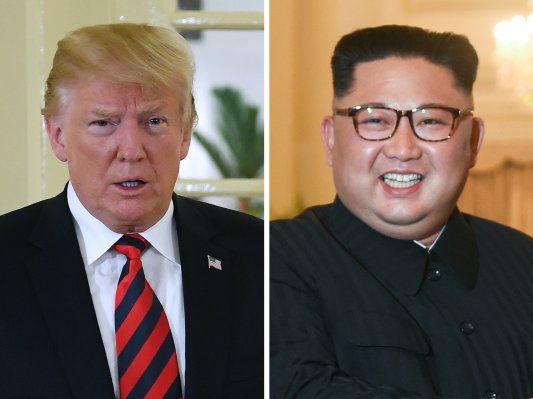 The Kim-Trump Summit Poses a Big Challenge for Interpreters
Next Up: Editor's Pick