Ideas
By Scott Kelly
Kelly is an engineer, a former U.S. Navy captain, former military fighter pilot and test pilot, and a retired astronaut; Kelly has also commanded the International Space Station and set the record for consecutive days in space by an American.

Before I spent a year onboard the International Space Station, I had a casual familiarity with Anthony Bourdain. If I was flipping through the channels and saw his show, I would stop and watch for a while like I do with much of what is on television.

In March of 2015, I launched aboard a Russian Soyuz rocket to spend a year aboard the International Space Station. About halfway through the mission I was feeling a little too detached from Earth, so I asked the psychological support staff at NASA to send me episodes of his show Parts Unknown. Seeing places and people of this planet up close, albeit on the small screen of a laptop, made me feel more grounded and connected to earth. I would often watch his show while exercising, running on our treadmill, sometimes realizing I had just zoomed past the place that was the subject of the show.

Although we are deprived in space of many things, including an earthly diet, his show was never about the food. Bourdain, instead, used our common basic need for survival to explore beyond our culinary tastes; connecting with the people he met to understand them from their unique perspectives of every corner of our world. He showed us through colorful, candid storytelling that while our planet is vast and our cultural experiences are as contrasting as the arid, rugged terrain of the Himalayas juxtaposed with the vivid, turquoise-marbled sea surrounding the Bahamas, still we share an even more familiar bond than food. He connected us with the common thread of humanity.

He made this large planet seem smaller, rendering boundaries between countries invisible, just as I viewed Earth from my vantage point of 250 miles above. A simmering pot of a Turkish-curry dish taught us about merging cultures after the fall of the Berlin wall, the east-west divide visible from space only at night by the color of city lights. A flat bread of simple flour, water, salt and yeast mixture showed us that despite a complicated history of wars and conflict, we have more in common than we thought.

Following his travels while I was in space brought me home to our planet. He made me feel like I was walking barefoot over those places that were so far below. For a moment, while I watched his show, I felt a little bit like I was back on Earth, sticking my toes in the water of life.

He made my time in space more palatable and helped me cope with missing Earth. When I returned the following year and later retired from NASA, I was often asked what I was going to do next. My answer was sometimes, “I don’t know, but if I could be Bourdain, I’d take it.” Anthony Bourdain helped this space flier stay connected to Earth and to its seven billion residents below and brought his viewers together in a profound way. RIP Anthony Bourdain, you will be truly missed. 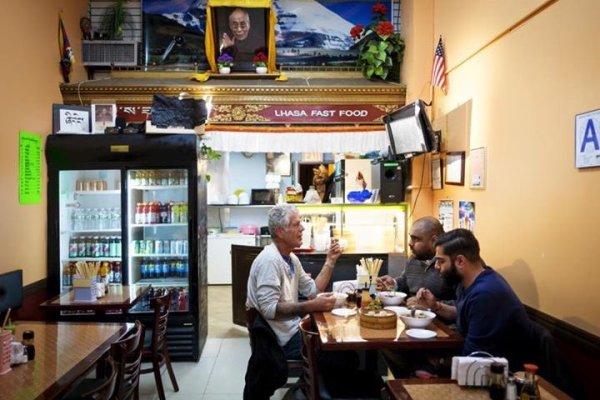 A Community Organizer on How Anthony Bourdain Brought His Globe-Trotting Curiosity to an Overlooked Corner of America
Next Up: Editor's Pick