‘We Were All in Awe of Him.’ World-Renowned Chefs Told Us Their Favorite Memories of Anthony Bourdain

If all he had ever done were to write Kitchen Confidential, it would have been enough to earn Anthony Bourdain the everlasting adoration of generations of chefs.

Even before the late writer and broadcaster became a celebrity to the general public, professional cooks revered him for the book, which depicted the hard-working, hard-partying life of the kitchen in all its trash-talking, prank-playing glory. Now, they are paying tribute to him after his death on Friday at the age of 61.

Producer Diane Schutz began working with him in 2002 on his first television show, A Cook’s Tour, and she remembers that “back then, if someone recognized him in an airport or came up to him at a bar, you could bet they were a chef,” she says. “They were the only ones who knew him. But he had a cult following in the kitchen, and everytime we did a shoot in a restaurant, everyone in the kitchen would have read it. They so appreciated him for painting the reality of what they did.”

Christina Tosi, chef and owner of Milk Bar, remembers being one of them. “I was already working as an AM prep cook at a small restaurant in Virginia when Kitchen Confidential came out,” she says. “Tony put words to the reasons why I loved the part of the restaurant that made no sense to most—the back of house. The sweat, the pressure, the intense honesty, the forbiddance of unnecessary emotion, the speed it required, the economy of words it demanded, the true grit amongst the most marvelous renegades all looking to belong, but never wanting to admit belonging, Tony, in all his crotchety might, gave us words to make sense of our unreasonable love for the unreasonable life of a line cook, a chef.”

But of course, the book was only the start. As his career took off, his television programs brought him into contact with famous chefs around the globe. In 2006, he shot an episode of No Reservations at El Bulli in Spain, which was then perhaps the most acclaimed in the world for its avant-garde style of cooking. In Kitchen Confidential, Bourdain wrote dismissively of that style of “molecular” cuisine before he had actually eaten there.

“He said we were shit,” Ferran Adrià told TIME. “But then, a few years later, when we actually met, the first thing he said to me was ‘I owe you an apology. And he went on to become a big supporter of what we were doing. We had a ton of affection for each other.”

Others share that sentiment. When Bourdain shot an episode at D.O.M in Sao Paolo, Brazil, chef Alex Atala brought him to a nearby street market. “He wanted to taste everything,” Atala said. “He was such a curious guy.” Eventually, Bourdain ended up at a stall that sold herbs and spices, and started tasting his way through them all. “The vendor didn’t know who he was, so he asked, ‘who is this gringo?’” Atala recalls. “But Tony was so expressive as he tried things that even though they didn’t speak each others’ language, you could see that they really understood each other. In that moment I felt like I could really see his soul. He was so good at human connection.”

Danny Bowien, the young chef who co-founded Mission Chinese Food, feels the same way. In recent years, Bourdain moved into producing and publishing, including getting his own imprint Ecco, which would publish Bowien’s The Mission Chinese Cookbook. But the first time they met, Bowien had just opened his first restaurant in San Francisco, and Bourdain had asked him to shoot an episode of The Layover together. Charged with taking the star around to his favorite spots, Bowien was nervous. “I had never done television, I had never done anything. And I was a huge fan,” he recalls. “So I was scared to death.”

Which may help explain why Bowien, who has since given up drinking, decided to take the edge off by starting at the Lipo Lounge. “It was this dive bar where you could smoke cigarettes and the bartenders played dice with you,” he recalls. “It turned out to be the perfect Tony spot. We drank 5 Mai Tais and 5 Coronas a piece there.” The two kept on, touring bars and growing more and more inebriated. But at every stop—and even in the street—Bourdain took the time to interact with the fans who came up to him. “At the end of the night we went for cheeseburgers at Sam’s in North Beach, and I must have called ahead, because there were like 40 people there. He gave attention and time to every person who wanted to shake his hand or take a photo with him. What I remember most about him is his warmth.”

Bourdain was dedicated to authenticity, and often demanded it from others. On a shoot in Sicily, for example, he was supposed to go fishing with a local chef. “We had asked to fish octopus or sea urchin, and they had said sure,” producer Schutz recalls. “So Tony and the chef went out together on one boat. I wasn’t with them, but I noticed a guy on another boat, throwing fish in the water. It turned out that the chef had been recalcitrant to tell the crew that there were no octopus or urchin to fish in those waters.

“Tony would never fake anything, and was irate. Really, really irate. He was so angry that I thought there was a chance he would cancel the shoot that night in the chef’s restaurant. But he didn’t. He doused himself in Negronis, and went ahead and had the dinner,” says Schutz. “At the end of the day, he was always a gracious guest.”

He never lost the chef’s ethos either, even decades after he left the kitchen. René Redzepi of Noma remembers traveling with him in Japan, for an episode of No Reservations. Toward the end of the shoot, Bourdain and his crew accompanied the Danish chef as he attended Cook It Raw, a freewheeling gathering where a small group of well-regarded chefs were introduced to the food culture of a place (in this case, Ishikawa prefecture) and then prepared a meal with what they had learned.

On the day of the final dinner, when all the chefs were hard at work preparing their dishes for the banquet that night, Bourdain stepped in and cooked them lunch. “It was on the porch,” Redzepi recalls. “He barbecued some meat. He was like the barbecueing dad, standing there with a beer in his hand. That was a stand-up move. That was a real chef thing to do.”

“We were all in awe of him,” Redzepi says. “He was the biggest person in our industry—he’s like the Milky Way, and we’re just all small specks.” 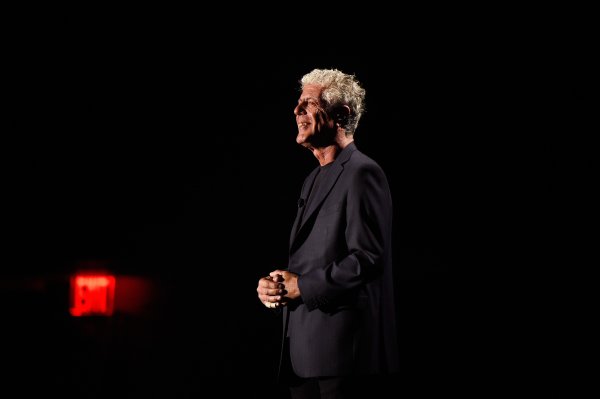 ‘He Brought the World Into Our Homes.’ Friends and Fans Share Heartfelt Remembrances of Anthony Bourdain
Next Up: Editor's Pick