President Trump and Kim Jong Un Are Finally Meeting. Here's What to Know About Their Singapore Summit

After much speculation, President Donald Trump met with North Korean leader Kim Jong Un for a historic summit in Singapore Tuesday, marking the first time that a North Korean leader has met with a sitting U.S. president; remarkable as the two countries have no diplomatic relations and are officially still at war.

With North Korea’s self described “complete” nuclear arsenal, and a history of tensely traded threats with the U.S., the stakes are dizzyingly high. Here’s a look at what to expect from the summit.

Where and when is the summit taking place?

The hotly anticipated summit began at the Capella Hotel on Singapore’s Sentosa Island, with the first meeting kicking off just after their handshake at 9:05 a.m. local time. The hotel is a secluded luxury resort on the island with two presidential suites, one of which is a standalone property that could be prime for hosting the high level talks.

Trump and Kim shared a historic handshake shortly after 9:00 a.m. before meeting one-on-one, with the assistance of interpreters, for about 45 minutes. The leaders then walked along a balcony at the Capella Hotel to a discussion joined by senior aides and a working lunch.

Trump called the opening session “very, very good” and praised the “excellent relationship” between the leaders.

Kim is scheduled to depart Singapore by 2:00 p.m., just five hours after the summit’s start, according to Reuters, leaving only a brief window for historic diplomatic headway to be made.

Trump said they had “developed a very special bond” in Singapore, while Kim told reporters that “the world will see a major change.”

Trump also predicted that the two would meet “many, many times” in the future, adding that he would “absolutely” consider inviting Kim to the White House.

Located off the southern coast of Singapore, Sentosa is home to other high-end hotels, beaches and amusement parks including Universal Studios Singapore. Its separation from the city centre may have been a factor in its selection as the summit location.

But in addition to resorts and recreation, the island also has a darker history. Sentosa was once known as Pulau Blakang Mati, meaning “Behind Death” in Malay, and has witnessed epidemics, massacres, and prisoner of war camps.

Singapore will be the furthest distance Kim Jong Un has traveled since assuming leadership of North Korea in 2011.

Who will attend the summit?

Trump and Kim will bring their own delegations to the summit. Secretary of State Mike Pompeo, who travelled to North Korea twice earlier this year to negotiate and finalize the summit, Chief of Staff John Kelly and National Security Adviser John Bolton comprise Trump’s team, along with other senior White House officials. Sung Kin, the U.S. ambassador to the Philippines, is also on hand to direct policy discussions with the North Korean delegation.

Absent from Trump’s delegation are First Lady Melania Trump and Vice President Mike Pence, who will both remain in the U.S., and Defense Secretary James Mattis, who recently visited Singapore.

Kim Jong Un is joined in Singapore by various members of his inner circle, who have also been involved in negotiating efforts over the past months. Kim’s sister Kim Yo Jong attended the PyeongChang Winter Olympics in South Korea with an invitation for Moon Jae-in that paved the way for inter-Korea talks at the end of April. Kim Yong Chol, often regarded as Kim Jong Un’s right-hand man, has played a pivotal role representing North Korea in negotiations leading up to the summit. Foreign Minister Ri Yong Ho and former Foreign Minister Ri Su Yong also joined Kim’s team for a discussion with senior aides, according to the White House Press Office.

Another group who also accompanied Kim are his jogging bodyguard unit, who made an appearance that went viral at April’s inter-Korea summit.

Have negotiations to arrange the summit been easy?

In the words of James Mattis, it has been a “bumpy road” to say the least. After the first meeting between Kim Jong Un and Moon Jae In in April, South Korea announced the North’s intention to meet with the U.S. by the end of May. Trump then made a surprise announcement on Twitter on May 10 that the summit would take place in Singapore on 12 June.

However, the summit appeared to hit a roadblock two weeks later, when Trump called off the summit in a letter to Kim Jong Un on May 24. “Sadly, based on the tremendous anger displayed in your most recent statement,” Trump wrote to Kim, “I feel it is inappropriate, at this time, to have this long-planned meeting.” The abrupt announcement came after North Korea made its anger known at Mike Pence’s comments comparing the country’s nuclear disarmament to the Libya example on Fox News.

One week after the cancellation, in another rollercoaster turn, Trump announced that the summit was back on track following negotiations between top level officials on both sides, and after Kim Yong Chol delivered a personal letter from Kim Jong Un to Trump.

What will Trump and Kim talk about?

Trump and Kim met and shook hands shortly after 9:00 a.m. Both leaders acknowledged their countries’ progress making it to that point.

“We will have a terrific relationship, I have no doubt,” Trump told reporters.

“Overcoming all the obstacles, we have managed to arrive here today,” Kim said.

Trump had previously said he would be able to assess Kim’s intentions within a minute. “I think I’ll know very quickly whether or not something good is going to happen. I also think I’ll know whether it will happen fast,” Trump had told reporters on June 9.

The two met one-on-one with the assistance of interpreters for 40 minutes, before the summit reconvened with aides and negotiators for more talks.

“We will solve a big problem, a big dilemma that until this point has been unable to be solved,” Trump said as the second meeting got underway. “I know that working together we will get it taken care of.”

Trump and Kim were each joined by extended delegations for a working lunch that included a varied menu of Western, Southeast Asian, and Korean dishes. Following the lunch, Kim’s motorcade left the summit venue, according to CNN. Trump is expected to hold a news conference later in the afternoon, before he departs from Singapore Tuesday evening.

The summit had initially been expected to last several days, but will now only constitute one day of talks.

It may be the case that the Singapore summit will serve mainly as a meet-and-greet for both leaders to make introductions, as the two countries currently have no formal diplomatic relations and the North remains under steep sanctions from the U.S. and the U.N. On Monday morning, North Korean state media reported that North Korea and the U.S. would exchange “wide-ranging and profound views” on establishing new relations, building a “permanent and durable peace-keeping mechanism,” achieving denuclearization and “other issues of mutual concern, as required by the changed era.”

Observers have warned against prematurely heralding the summit as a turning point of U.S.-North Korean relations and denuclearization on the peninsula, as North Korea will not easily give up its nuclear deterrent. Reports in recent days have suggested that should the meeting go well in Singapore, Trump may consider inviting Kim to the U.S. for follow up talks.

What do Trump and Kim want from the summit?

The U.S. has stressed that it wants to see steps toward complete, verifiable and irreversible denuclearization of North Korea before sanctions relief can be implemented, although Trump has signaled some flexibility.

Skepticism remains over whether Kim is truly committed to achieving this aim, and difficulties may lie in how both the U.S. and North Korea define denuclearization. North Korean officials have made no secret of their displeasure at a total and immediate effort to destroy weapons on the peninsula, and are said to favor a step-by-step approach. The demolition of the Punggye-ri nuclear test site last month was seen as a positive gesture prior to the summit, but it is not an irreversible one and further measures would have to be taken to satisfy U.S. demands.

“Trump is likely to declare victory at the summit irrespective of the outcome, but denuclearization of the Korean peninsula will be a years-long endeavor. The true test of success will be whether the summit leads to concrete action by North Korea to reduce the threat posed by its nuclear weapons,” says Kelsey Davenport, director for nonproliferation policy for the Arms Control Association.

Despite this, some steps taken by Kim prior to the summit indicate a legitimate willingness to talk to the U.S., and could point to a genuine ambition to strike some kind of deal, most likely focused on economic development. A series of personnel reshuffles in the North’s military circles prior to the summit, as well as the regime’s reported enthusiasm for American investment, may comprise Kim’s strategy for lifting the nation out of poverty. However, whether Trump and Kim will even reach the stage of discussing a potential denuclearization deal at this summit in Singapore remains to be seen. 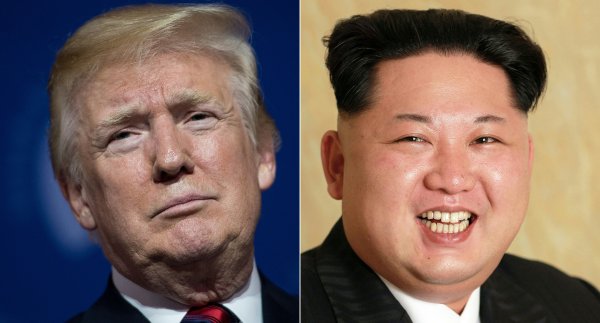 Is Kim Ready to Make a Deal With Trump?
Next Up: Editor's Pick