Republicans Avoided a Revolt on Immigration. But the Fighting Isn’t Over

Republicans in the House of Representatives appear to have briefly avoided an intra-party revolt on immigration, but the issue isn’t going away anytime soon—especially with the midterm elections heating up.

An insurrection from moderate Republicans who are just three signatures shy of the support needed for a discharge petition to force a vote on immigration reform in the House, including a solution on the 700,000 immigrants who were shielded from deportation by an Obama-era program known as DACA, is paused—for now. After a Thursday morning Republican conference meeting, House Speaker Paul Ryan said lawmakers are now focusing on reaching a compromise that he says will have a better chance of becoming law. “I think our members realize that it’s better to have a process that has a chance of going into law than not,” Ryan said.

Yet, even if lawmakers manage to corral around a bill—one that appeases Democrats and moderates who want so-called Dreamers to have a path to citizenship and Republicans who are eager to reject anything that can be perceived as amnesty, at that—it will still face an uphill battle. What’s more, the issue is already front-and-center in the midterm contests.

If a bill passes the House, its fate in the Senate is unclear. Senate Majority Leader Mitch McConnell has made clear immigration will not be on the agenda unless a proposal is presented that President Donald Trump is willing to sign. “I don’t think he’s okay with anything that I’ve seen coming our way,” McConnell told Fox News on Wednesday.

Getting the President on board will be its own challenge. President Donald Trump and his aides have long said he will not sign a bill that offers protections to DACA recipients if it does not provide funding for a border wall or address policies he considers pull factors for illegal immigration, including the diversity visa lottery program and family reunification.

And Trump has shown recent interest in making border security and immigration key issues in the upcoming Midterms.

At a late May campaign rally for Rep. Marsha Blackburn, who is running to replace retiring Sen. Bob Corker in Tennessee, Trump framed Democrats as “MS-13 loving” fans of “open borders” and said he hopes the issue is at play throughout campaign season. “That’s a good issue for us, not for them,” he said.

Republicans seem to agree with him. A recent USA Today analysis found that some 14,000 ads with hardline messaging on immigration have run already this cycle. The only other message that appeared more, according to their review? Praise for President Trump.

But for some in the caucus, including the two dozen-or-so who have signed on to the discharge petition, inaction on DACA (paired with recent administration moves that have angered Democrats and civil rights groups) could hurt them at the polls. Twenty-three Republicans currently represent districts that went for Hillary Clinton in 2016.

On the ground there, Democrats are pounding the GOP for its inaction on DACA and other immigration-related issues. “There have been some critics who say this could cost us our majority,” Rep. Jeff Denham, a Republican from California who is among the petition’s leaders, recently told the New York Times. “My concern is that if we do nothing, it could cost us our majority.”

That split—between those who eager to look tough on immigration and those who are vulnerable on the issue—is one of the many driving forces behind the current impasse in the House.

Trump’s interest in making this a campaign issue, says Frank Sharry, the executive director of the immigration reform group America’s Voice, makes it less likely that there will be any legislative solutions on immigration in the coming weeks. Whether or not that works in Republicans’ favor is yet to be determined, says Sharry, who notes that in several elections over the past year—including the Virginia Governor’s race and a Pennsylvania special election—the tactic has backfired.

“As much as we talk about will this tactic work to turn out white voters who are upset about immigration,” he says, “the other question we have to ask is, does it backfire in a way that it produces turnout in a bigger margins for Democrats because it’s viewed as so divisive and dehumanizing?” 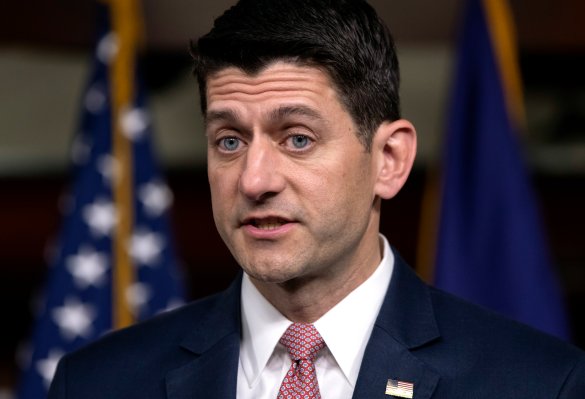 Why Republicans Can't Figure Out What's Next on Immigration
Next Up: Editor's Pick