While Beyhive fans may have been disappointed to learn that an image of Beyoncé and Jay Z with a pair of babies that was shown on the debut night of their On the Run II tour last night in Cardiff, Wales was not in fact of Rumi and Sir Carter, they can console themselves with a brand new picture of the twins that was shared on Instagram by proud grandma, Ms. Tina Lawson.

Ms. Tina, an ebullient Instagram enthusiast, shared a photo of the twins alongside their parents. The image appears to be a screenshot of a video that was shared during the concert while Jay Z and Beyoncé performed his song, “Forever Young.” In the video, the power couple is wearing all white and are facing each other in the same manner as a wedding ceremony, some fans have speculated that the video is footage from a possible vow renewal.

This isn’t the first time that the twins have made a splash on Instagram; when Beyoncé announced her pregnancy with them via a flora-filled Instagram in February of 2017, the post immediately went viral, later becoming the most-liked Instagram of that year.

See Ms. Tina’s post and footage from the concert below. 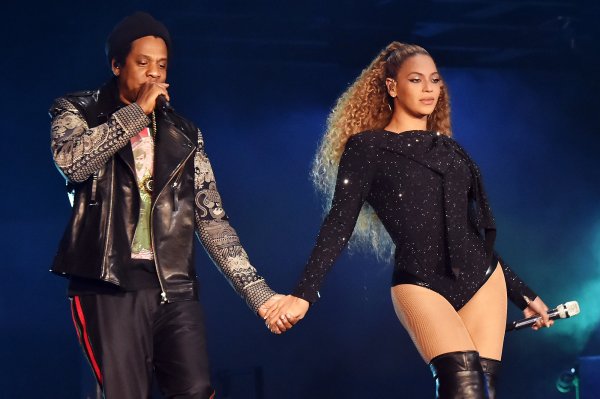 Actually, Those Aren't Beyoncé's Twins in That 'OTR II' Tour Picture
Next Up: Editor's Pick