The longest total lunar eclipse of the 21st century is about to happen on Friday, July 27.

While the 2018 lunar eclipse won’t be visible from the U.S., places all around the world — including the Middle East and Greece — will be in prime locations to see the celestial event.

After searching for areas that are projected to have the clearest skies and longest window of time to see the entire four-hour eclipse, TIME compiled a list of the best places to see the July 27 total lunar eclipse.

People in Cairo will be able to see the entire lunar eclipse — and it’s likely that there won’t be any clouds in the area to block views of the celestial event, according to The Weather Channel.

There will also be some opportunities to capture Instagram-worthy photos of the moon over the Great Pyramid of Giza or the Cairo Citadel during the eclipse.

A picture taken on December 6, 2017 shows a view of the pyramid of Khafre on the Giza Plateau.
MOHAMED EL-SHAHED—AFP/Getty Images

The popular open air Promenade Park in the coastal city of Limassol will offer uninhibited views of the 2018 lunar eclipse. Head to the Ancient Tombs or the Limassol Castle, which was built in 1191, for some good photo opportunities.

While the island of Santorini does not fall within the area that can see every phase of the lunar eclipse, you will be able to see all of the moon move into totality and all of the totality itself, which will begin at 10:30 p.m. and end at 12:13 a.m. on Friday, July 27.

Tourists watching the sunset in Oia, the most famous of all villages of Santorini.
Barry Lewis—Corbis via Getty Images

Dubai has many beautiful seaside areas including the Kite Beach, or the man-made Palm Island. While the beaches are great places to go in the day, you might want to head inland for the 2018 lunar eclipse, as it is less likely to be cloudy.

The places most likely to be the clearest on July 27 are away from the shoreline. The Jumeirah Village Circle or the Dubai Miracle Gardens could make good spots to camp out during the eclipse. Dubai is also known for its very tall buildings, so it may be good to book a hotel room on a particularly high floor during the eclipse.

he Majlis Course with the skyline of the Dubai Marina behind at The Emirates Golf Club on January 31, 2018.
David Cannon—Getty Images T

A man crosses a street as people drive back home during an evening rush hour on November 15, 2017 in Harare, Zimbabwe.
AFP/Getty Images

Some people may be able to watch the lunar eclipse surrounded by giraffes and zebras in Zimbabwe’s Matobo National Park. 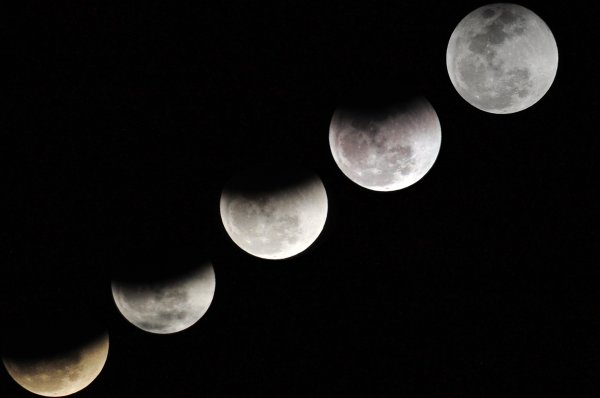 Practically Everyone in the World Will See the Longest Eclipse of the Century Today. Here's What to Know
Next Up: Editor's Pick