For the British Royal Family, Trooping the Colour 2018 served as a joyous event to celebrate the birthday of Queen Elizabeth II — and gave fans another look into the extraordinary lives of the royal family.

But the annual event also offered a moment every mother can relate to. At one point while standing on the balcony, Princess Charlotte appeared to fall backward and started to cry. Kate Middleton, the Duchess of Cambridge, immediately knelt down to comfort her then held her as the parade continued.

Princess Charlotte, 4, appeared to enjoy the rest of the parade, clapping alongside her brother Prince George and Savannah Phillips, their cousin.

Together George and Charlotte conspired to steal the show – per usual. Although this time, Savannah Phillips proved to be the real queen – next to the actual Queen of course.

Savannah, the daughter of Peter Phillips – the son of Princess Anne and the Queen’s oldest grandson, put her hand over George’s mouth and then shushed the future king to stop him from talking so much.

Trooping the Colour is a longstanding tradition that celebrates Queen Elizabeth II’s birthday. Queen Elizabeth II already turned 92 years old on her real birthday, April 21. But the monarchy holds the event on the second Saturday in June to celebrate in the sun, and it’s replete with military drills galore.

You better believe there was both pomp and circumstance. But there’s no place like a balcony above the thousands who crowded the streets to put little kids to the test. Overseen by their mother Kate Middleton, the two did their best royal official duties. Prince George wore his signature shorts look, but perhaps most noteworthy were his wide-ranging facial expressions when time came for the balcony photo. Aside from Princess Charlotte’s fall, she worked her charm by showing off her excellent waving skills. Their new younger brother Prince Louis did not attend the Trooping of Colour, as, at just seven weeks old, he was too young to participate, according to People.

To read more about Prince George and Princess Charlotte’s adorable royal appearances in the past, read more of TIME’s coverage here. 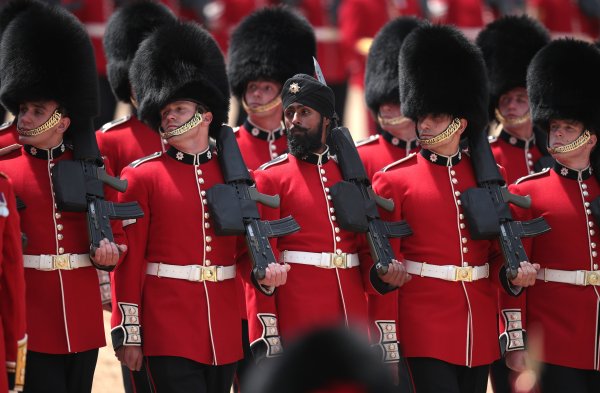 A Sikh Soldier Became the First to Wear a Turban at Trooping the Colour
Next Up: Editor's Pick