President Trump Is Wrong. The Mueller Probe Is Constitutional

Katyal is the Paul and Patricia Saunders Professor of National Security Law at Georgetown University Law Center and a partner at Hogan Lovells. He previously served as Acting Solicitor General of the United States.

President Trump declared on June 4 that the “appointment of the Special Counsel is totally UNCONSTITUTIONAL!” Like many of Trump’s utterances, it was made with all the deliberation of a tweet. But unlike some of his targets, which are susceptible to a dashed-off gurgitation, this is an intricate constitutional issue worthy of sober reflection. Happily, there is a clear answer: virtually no one believes the appointment of the special counsel is unconstitutional, and there has been a long-standing bipartisan consensus to the contrary.

A little background: After Watergate, Congress passed the Independent Counsel Act, which created a supercharged independent prosecutor who acted in many ways outside of the Justice Department and with little oversight. That act empowered Lawrence Walsh to investigate Iran-contra and Kenneth Starr to investigate Whitewater and Monica Lewinsky. Notably, a near unanimous Supreme Court upheld the legality of such a prosecutor in 1988 in Morrison v. Olson. Only Justice Antonin Scalia dissented.

Because the prosecutor created by the Independent Counsel Act was so anomalous, Congress wrote a sunset clause into the act — whereby it would have to be affirmatively re-upped in order to continue. I joined the Justice Department in 1998, at the very start of the Lewinsky investigation, and the Department knew the Independent Counsel Act was due to sunset on June 30, 1999. Attorney General Janet Reno and Eric Holder asked me to convene a working group to think about the act and whether it should lapse, and if so, what should replace it.

It is against this backdrop that Trump’s claims must be assessed. The Supreme Court already upheld a supercharged independent counsel in the Morrison case. And while many, such as myself, think the Court may have gone too far in Morrison, it is the law of the land. Of course, the Supreme Court is free to overrule an earlier decision, but the problem for Trump is that the special counsel looks nothing like its predecessor. The whole point of the regulations was to put the special counsel fully under the Justice Department, instead of as an independent fourth branch of government. In other words, even overruling Morrison would not make the special counsel probe unconstitutional, because the regulations take into account the weightiest constitutional objections to the Independent Counsel Act.

The best argument for why the Independent Counsel Act was unconstitutional was that the prosecutor was a “Principal Officer” under our Constitution — someone with virtually Cabinet-level powers — but who had not been nominated by the President and confirmed by the Senate for such a task. Virtually no one thinks Mueller is like an independent counsel in that respect. He is working under the authority of the Deputy Attorney General Rod Rosenstein. He cannot take steps without the approval of that Senate-confirmed, presidentially appointed official. Far from being a “Principal Officer,” Mueller is a true subordinate — incapable of doing anything that his boss, Rosenstein, rejects.

And who, pray tell, is Rod Rosenstein’s boss? None other than President Donald J. Trump. No fact better puts the constitutionality of the special counsel in perspective. If you or I get indicted, we don’t have the luxury of picking our prosecutor. We are stuck with whoever has the case. But in the end, the prosecutor of Donald Trump is none other than Trump’s own guy, Rod Rosenstein. Trump nominated Rosenstein to the position he holds; he is not some Obama Administration holdover. The idea that the special counsel is a runaway agent biased against Trump is thus a feverish dream concocted by those who are afraid of where the investigation is leading. And if there is any doubt about that, Rod Rosenstein himself has dispelled it. He has testified to Congress that Mueller has come back to him and asked for additional authority whenever he has sought to expand his investigation. That is why a federal judge in Washington, D.C., already rejected all of this “unconstitutional” nonsense when such arguments were made in the Paul Manafort case.

Now, for the more legally inclined, here’s the doctrine. The Supreme Court in Morrison said that the supercharged independent counsel was not a Principal Officer based on four things: the counsel only performed limited duties; the counsel had narrow jurisdiction; the Attorney General could remove the counsel; and the counsel had limited tenure in office. Each of those four applies at least as much (and in many cases a good deal more) to the special counsel. The jurisdiction and power of the special counsel is highly circumscribed and subject to Justice Department approval. Indeed, the regulations say that “the Attorney General may request that the Special Counsel provide an explanation for any investigative or prosecutorial step, and may after review conclude that the action is so inappropriate or unwarranted under established Departmental practices that it should not be pursued.” And Rosenstein appointed Mueller under a limited mandate, “to conduct the investigation confirmed by then-FBI Director James B. Comey in testimony before the House Permanent Select Committee on Intelligence on March 20, 2017, including… any links and/or coordination between the Russian government and individuals associated with the campaign of President Donald Trump” and “any matters that arose or may arise directly from the investigation.” The special counsel’s tenure expires when the need for the investigation ends, unlike a Principal Officer. And the special counsel can be removed just as the independent counsel could be.

As with Manafort, Trump’s claim about the special counsel did not arise out of thin air. He’s not a law professor trying to gain tenure by writing a provocative and iconoclastic article. He’s a subject of a federal investigation by the special counsel, and every week makes that investigation look even more important. Trump is acting like he is fighting for his life, and grasping onto slender constitutional reeds to keep from drowning. But none of that makes the special counsel probe “unconstitutional.” And if Mueller ever did overstep his authority, Rosenstein of course could discipline or fire him. For all these reasons, Trump’s claim is, legally speaking, very weak.

Here, it’s helpful to compare what Trump has said with what a previous president to face a special prosecutor, Richard Nixon, did. As Kenneth Starr and I wrote earlier this year, Nixon, faced with the repercussions of the Saturday Night Massacre, promised not to fire special prosecutor Leon Jaworski. He even went so far as to agree to new Justice Department special prosecutor regulations (regulations that went much further than the current special counsel ones) — and those regulations expressly said that Nixon could not remove the special prosecutor without the express consent of both parties in Congress. Trump hasn’t even begun playing by Nixon rules. The lingering question is why. 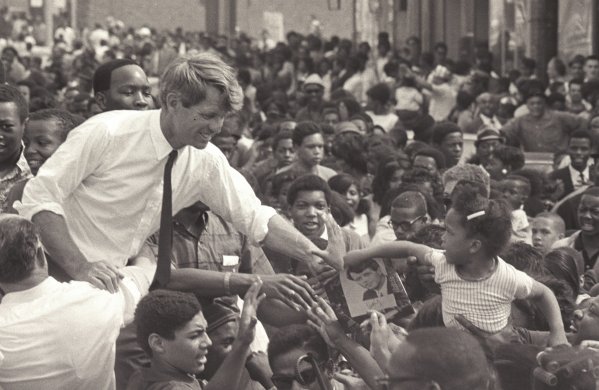 Robert F. Kennedy Was Killed While Campaigning for President. Here's What Drove Him to Run
Next Up: Editor's Pick