‘The Most Optimistic Generation Since the 1990s.’ Andre Agassi on the Tennis Players to Watch

U.S. tennis great Andre Agassi says a generation of young American tennis players could once again dominate the game like he and Pete Sampras did in the 1990s.

Speaking in Paris during the French Open, which he was attending as an ambassador for the Swiss watchmaker Longines, Agassi told TIME that he thought U.S. players had suffered in world rankings while an unusually gifted generation of players like Roger Federer, Novak Djokovic and Rafael Nadal have dominated the scene. “This generation hasn’t left a lot of room for anybody to pick up any slack,” he says.

Yet there are bright American stars emerging, said the former world number one. Agassi says Frances Tiafoe, “a hell of an athlete,” could be one to watch at slams in the years to come; as well as the 6’ 11’’ Reilly Opelka. “I think we have the possibility of someone sneaking through.”

Read more: “I wake up with more purpose now.” Andre Agassi opens up about building a life after tennis

When Agassi played professionally, from 1986 to 2006, it was during an era of American dominance in the men’s game. He and Sampras spent long periods as the world number 1, following in the footsteps of U.S. champions from Stan Smith to John McEnroe and Jimmy Connors. Today, though, European players like Federer and Nadal are the stars of men’s tennis. Andy Roddick was the last American man to win a Grand Slam singles title way back in 2003.

That same year, Agassi became the oldest number 1 tennis player at 33—a record since broken by Federer, who took the number 1 at the age of 36, after five years away from the top spot. Both had a late career surge, although Agassi insists that beyond that, his career bears little resemblance to Federer’s.

“He’s played a long time, certainly longer than me and surpassed me as the oldest number one, and he deserves to hold all those accolades.” But Agassi says unlike Federer, he went through more trials and tribulations, often ones that were “a bit more self-inflicted and desperate.”

When it comes to what Federer brings to the game, Agassi is simply a fan. “Watching him is watching history,” he says. “You see it every time with the way he conducts himself—with the fans, with his peers, with the media.

“I just have more appreciation than the average fan because he makes it look so easy and I actually think I know what it takes. And it’s truly remarkable.”

Agassi’s admiration for today’s champions doesn’t stop there. Speaking to TIME on Saturday, two days before Serena Williams announced her withdrawal from the French Open because of a pectoral injury, Agassi praised her return to the court after the birth of her child as a sign of her “determination, clarity, discipline, commitment and competitiveness.”

Much to the joy of fans worldwide, Williams, a 23-time grand slam winner, had played to form through three rounds in her grand slam comeback after giving birth to her daughter in September 2017. “It’s a challenge that probably equals a playing field for her, in many respects—which speaks to how great she is,” he says.

Agassi became a father himself while he was still playing professional tennis. His wife, the German tennis star Steffi Graf, gave birth to their son in 2001 and daughter in 2003. “Having children does change your perspective,” says Agassi. “I could never speak as a mother because there’s something about a mother’s love and commitment…not to mention what you go through physically.”

Though he couldn’t have predicted Williams’ withdrawal from the tournament, he understands the fight it takes to get back in the game. He says: “Seeing champions struggle and overcome adversity or difficulty, whatever that may be, is a pleasure. Success or failure, I respect that fight and that commitment.” 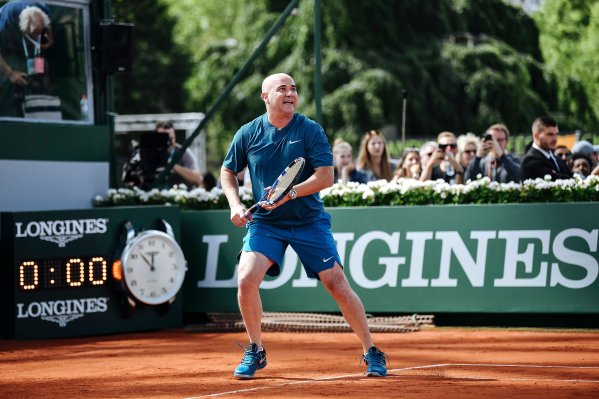 Andre Agassi's Next Chapter
Next Up: Editor's Pick