Ideas
By Jeb Bush
Bush served as the 43rd Governor of Florida and was a candidate for the 2016 Republican presidential nomination; he is a co-author of the book, Immigration Wars: Forging an American Solution.

In recent weeks, more than 20 Republican House members have come forward to demand a congressional vote to determine the fate of the illegal immigrants currently protected through the Deferred Action for Childhood Arrivals (DACA) program. Yes, just a vote. That this extraordinary procedural measure is necessary demonstrates a failure by Republican leadership. Our party is not proving it can effectively problem-solve and govern.

There has been a wealth of news stories this month detailing concerns by various Republican leaders that a vote on DACA could cost the Republican party our control of the House in the midterms. Fortunately, the data doesn’t bear that result out. In fact, a recent poll shows that nearly 70% of Republicans support legal residency for children brought illegally to the United States through no fault of their own. The percentage of support in swing districts that will determine the next Congress’ majority is even higher.

Despite the urgency of our nation’s immigration crisis, politicians on both sides of the aisle cynically employ immigration as a wedge issue, election after election, for their own benefit. Meanwhile, our inability to fix a broken system has tremendous real world costs, both human and economic.

As Republicans consider whether they will hold off taking up immigration in advance of November, I offer a cautionary hypothetical: What happens if Congress doesn’t address the issue this year, and Republicans lose the majority? Do we really want to risk waiting to see what a Democratic House and an unpredictable White House may do?

As opposed to caucus infighting over a vote on the fate of DREAMers — just one of many issues that must be addressed — why not embrace conservative, comprehensive immigration reform now? Piecemeal legislative efforts haven’t proved successful to date, so let’s advance a suite of reforms that will return our immigration system into a functioning and economically advantageous institution. President Donald Trump — who has displayed a striking lack of consistency on immigration policy but deserves credit for remaining focused on border security — has indicated multiple times he is open to a striking a deal, something President Obama failed to do when his party controlled Congress.

The politics of the issue may be tough, but the solutions are far from elusive.

First, it is past time to truly secure our border, and there are new technologies to supplement physical barriers that can be more effective at a dramatically lower cost than constructing a 2,200-mile wall— an unrealistic idea that has little chance of coming fully to fruition, regardless of who pays for it. Considering the latest idea is to “crowdfund” the estimated $21.6 billion project, it would seem pragmatic to focus on the achievable, including bolstering drone surveillance and improving infrastructure that will allow for better monitoring of our border.

Second, we must end the diversity lottery — which results in 50,000 visas annually — and narrow family reunification to what every other country allots for: spouses and minor children. Chain migration accounts for a substantial portion of immigrant entrances into our country with no respect to merit or prospective benefit to our nation.

Countries like Canada and Australia have prioritized economic-driven factors in their immigration systems, with substantial benefits for their economies. Based on current research, we already know legal immigrants are almost twice as likely to start a business than individuals born here, comprise a quarter of all entrepreneurs in the country and are three times more likely to file patents for innovations.

Third, we must modernize our system, overhaul the bureaucracy and effectively enforce our immigration laws. The biggest immigration problem we face is the large population of immigrants who overstay their visas, accounting for a full two-thirds of those here illegally in recent years. Investments in our court system and law enforcement are critical — currently, there is a backlog of more than 700,000 cases before immigration judges. E-Verify, a Department of Homeland Security resource that enables businesses to check if prospective employees are eligible to work in the U.S., must be enhanced and made mandatory to use; employers who don’t should face sanctions. We also have to improve the William Wilberforce Trafficking Victims Protection Reauthorization Act so it no longer provides an unintended incentive for sending Central American children into the country illegally.

Finally — and likely the most difficult element to achieve consensus on — we need to address the full population of illegal immigrants in our country today.

For all law-abiding DREAMers, there should be a path to citizenship. But the same should not be extended to their parents or other undocumented immigrants who broke laws to come here. Rather, we should develop a framework that allows for them to come out from the shadows, apply for a provisional green card, pay a fine, pay taxes (as many already do) and, over an extended period of time, earn legal status. Rhetoric aside, our country has no realistic plans to deport millions of people, and it’s time we address what we actually can do. Refusing to address the status of the majority of illegal immigrants in the country will only prolong our challenges.

Meaningful tax reform was a huge win for the American people in 2018, but it doesn’t have to be the only one. If congressional Republicans want to be masters of their own fate on election day, they need to keep working. Tackling immigration and other issues of high priority to voters — including finally repealing Obamacare, as promised — would provide conservatives the platform guaranteed to win in 2018. 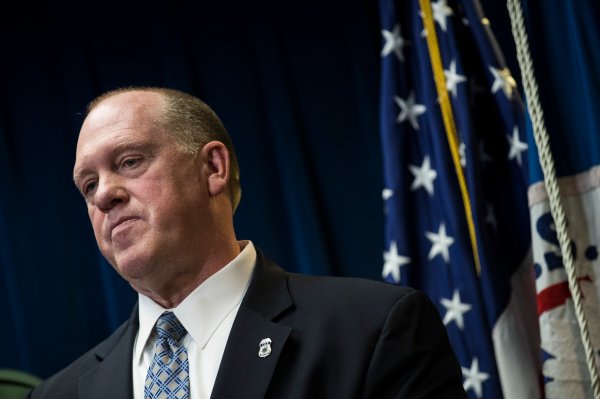 Immigration and Customs Enforcement Director Defends Separating Families at the Border
Next Up: Editor's Pick