It's the 40th Anniversary of Grease: Where's the Cast Now?

This weekend means it’s officially been 40 whole years since the T-Birds and Pink Ladies first danced and sang their way into our hearts, but we’re still hopelessly devoted to Grease.

When Grease, the movie based on the hit Broadway musical, made its big screen debut in 1978, it was the highest grossing film of the year. Today, it remains the second most-successful movie musical of all time, according to Box Office Mojo, having only recently been ousted from the top spot by Disney’s Beauty and the Beast live-action reboot.

From Olivia Newton John’s good girl Sandy to John Travolta’s greaser Danny, let’s take a look at what the cast of the beloved ’50s nostalgia flick is up to today.

Fresh off his breakout turn in 1977’s disco drama Saturday Night Fever, John Travolta cemented his place in musical movie history as Rydell High’s resident bad boy Danny Zuko. He went on to earn a number of Oscar, Golden Globe, BAFTA and SAG nominations over the years for his roles in instant classics like Pulp Fiction, Get Shorty and Hairspray.

At 29, Olivia Newton-John wasn’t sure if she could pass as the high school-aged Sandy Olsson. But it was clear to John Travolta that she was the one that he wanted.

“She had a brilliant voice, and I didn’t think there could be any more correct person for Sandy in the universe,” he told Vanity Fair in 2016. Travolta was determined to get her the part. “I insisted that she be met and that we cast her.”

Primarily a singer, Newton-John has since described Grease as a “turning point” for her musical career, allowing her to transition from exclusively country songs to pop hits like “Physical.”

Newton-John has won several American Music Awards and four Grammys and is considered one of the world’s best-selling artists of all time. Unfortunately, she is currently on a touring hiatus due to a recurrence of the breast cancer she was first diagnosed with in 1992.

After winning fans’ hearts as Betty Rizzo, queen of the Pink Ladies, Stockard Channing went on to thrive both on stage and the small screen. In addition to starring in numerous Broadway shows, the now 74-year-old Channing notably played First Lady Abbey Bartlet on The West Wing as well as Alicia Florrick’s mother Veronica on The Good Wife. She is a Tony winner and 2-time Emmy Award winner.

Jeff Conaway went from playing Danny himself in the Broadway production of Grease to the top greaser’s finger-snapping sidekick Kenickie in the movie. He later earned two Golden Globe nominations for his role as out-of-work actor Bobby Wheeler on the TV series Taxi.

Conaway passed away in 2011 at the age of 60 from pneumonia with sepsis following a long battle with drug and alcohol addiction.

Actress Didi Conn attends the "Evening Of Discovery" Gala at Pier Sixty at Chelsea Piers on May 15, 2012 in New York City.
Getty Images

Didi Conn has stayed in touch with her Grease roots over the years, reprising her role as Frenchy in 1982’s Grease 2 and making a cameo as a waitress at the Frosty Palace in 2016’s Grease: Live!—a television special in which singer Carly Rae Jepson took over as Frenchy. She is the only actor to appear in all three screen adaptations of the franchise.

Although his movie career cooled in the years following Grease, Barry Pearl—a.k.a. T-Bird member Doody—found success in the children’s entertainment world playing Professor Tinkerputt in NBC’s 1994 primetime special Bedtime with Barney: Imagination Island as well as the stage production Barney’s Big Surprise. The now 68-year-old actor was also the only original cast member besides Conn to show up in Grease: Live!

After strutting his stuff as T-Bird Sonny LaTierri, Michael Tucci moved on to television series such as The Paper Chase, It’s Garry Shandling’s Show and Diagnosis: Murder. He is currently teaching performing arts at St. Francis High School in La Cañada Flintridge, California, and recently revived his acting career as Melissa McCarthy’s father in The Heat.

Jamie Donnelly had already had plenty of time to perfect her portrayal of Jan on Broadway before landing the role of the goofy Pink Lady in Grease the movie. She is also widely known for originating the roles of Magenta and the Usherette in both the Roxy and Broadway productions of The Rocky Horror Show. Today, Donnelly is an acting coach and continues to appear in guest spots such as that of Peggy Shaugnessy on Ray Donovan.

Kelly Ward’s acting career largely came to an end just a few years after he played Putzie—a role created specifically for Grease the movie—but his work in the entertainment world continues to this day. The now 61-year-old T-Bird currently works as a voice director for Disney Television Animation in addition to teaching musical theatre at the University of Southern California.

Although Dinah Manoff stopped appearing on screen in the 2000s, she had a successful career in television following her role as the one and only Marty Maraschino. Not to mention that she won a Tony Award for Best Featured Actress in a Play for I Ought to Be in Pictures. 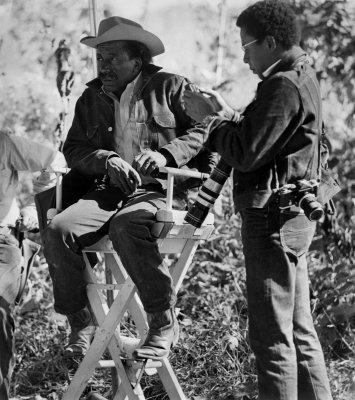 The 'Pressure to Make Good for Your Whole People' and the Story Behind 'SuperFly'
Next Up: Editor's Pick