The outgoing acting director of Immigration and Customs Enforcement defended the agency Tuesday from a backlash over a policy of separating parents and children caught illegally crossing the border.

Speaking at a newsmaker event hosted by the Center for Immigration Studies, a group that advocates for lower levels of immigration, ICE Director Tom Homan said he supports the policy, which is enforced by the U.S. Customs and Border Protection.

“Those who choose to come between the ports of entry are committing a crime,” said Homan, who is retiring in June after 34 years in federal law enforcement. “Children and parents get separated every day across this country when a parent is charged with a criminal offense. It’s sad to see children cry when you take a parent out of a home, but because it’s sad, doesn’t mean that we ignore the law.”

Earlier this spring, Attorney General Jeff Sessions announced that federal officials would be implementing a “zero tolerance” policy at the border under which any person found illegally crossing the border will be prosecuted. That has meant that when adults traveling with children, including those who may be seeking asylum in the U.S., are captured, they are handed over to the U.S. Marshals Service while their kids are placed in the custody of the Office of Refugee Resettlement, run by the Department of Health and Human Services. In early May, some 658 children were separated from their parents at the border.

Speaking at the National Press Club event, Homan addressed a wide range of issues from sanctuary policies to recent upticks in border crossings. He called sanctuary policies “dangerous,” suggested that “loopholes” were serving as a pull factor for those seeking to enter the U.S. illegally, and said the majority of the 1,400 kids who federal officials were unable to locate “don’t want to be found” because the “majority of them are hiding.” He also blamed “misinformation” for criticism that ICE has faced throughout the Trump Administration.

“This isn’t just about enforcing the laws of this country, it’s about saving lives,” he said. “If we don’t do and fix these policies and control our border and take these enticements away more people are going to take the dangerous journey to enter this country illegally.”

The statements were not out of character for the official. And as the acting director of ICE, Homan has been one of the fiercest defenders of Trump and the tough immigration policies that have come to define his Administration. Last year, Homan drew headlines for saying undocumented immigrants in the U.S. should live in fear, comments he has only doubled down on despite the backlash he’s faced from advocacy groups and lawmakers.

“You can like or love this president, but no president has done more for border security and public safety than this president. You cannot deny that,” he said.

Homan faced criticism from a Democratic lawmaker for addressing the Tuesday event because the Center for Immigration Studies has been called a hate group by the Southern Poverty Law Center. 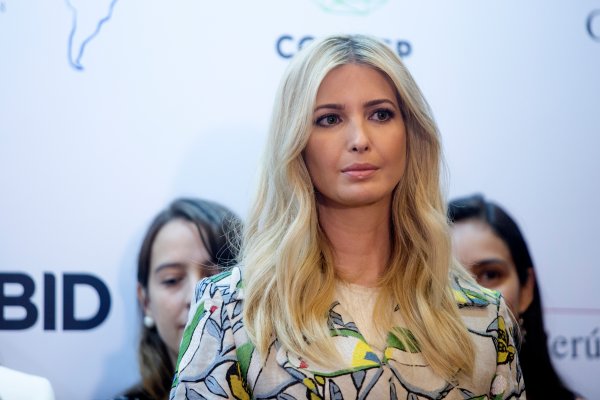 Ivanka Trump’s Photo With Her Son Criticized as ‘Tone Deaf’
Next Up: Editor's Pick