Here's the Campaign Howard Schultz Could Run for President

Starbucks Executive Chairman Howard Schultz’s announcement that he will leave the company at the end of the month prompted immediate speculation about a potential political future for the man who built Starbucks into a global behemoth.

Schultz — whose potential political future has been the subject of such speculation for years, including in a 2015 TIME cover story — remained non-commital on the topic this week, telling the New York Times ahead of the announcement that he was considering a “range of options” in response to a question about running for president.

In an interview with TIME in March, Schultz stressed that he remained a private citizen but jumped into political discussion and hinted at the themes that could animate a potential campaign including reducing the national debt and bipartisanship.

“There’s just been a lack of responsibility [from] both parties,” he told TIME at a Starbucks coffee farm in Costa Rica. “If you just got people in the room who left their ideology outside the room and recognized that we’re here to walk in the shoes of the American people, we could solve these problems.”

Schultz is seen as a potential Democratic candidate and taken public stances of a slew of social issues from student debt to race relations. But in his interview with TIME, he seemed most animated by a fiscally conservative position — reducing the national debt. To deal with that issue, Schultz called for a “centrist approach” to address entitlement spending and said the U.S. need to reach 4% growth.

“There’s no for-profit business in the world that could sustain itself or survive with $20 trillion in debt,” he said. “And we can’t keep pushing this. … It’s just not responsible.”

Schultz also called for the U.S. to reclaim the mantle of leadership on climate change, including by rejoining the Paris Agreement, from which Trump has said the U.S. will withdraw. Asked about a carbon tax as a solution to climate change, Schultz demurred, saying discussion about a carbon tax would need to be “part of a broader solution” that includes the national debt.

“We’re here in a sense talking about climate change, but all of this is related to the leadership that we need, the centrist approach we need, the understanding that science is real and a fiscal responsibility to once and for all address the fact that we can’t rob future generations,” he said.

In the interview, he also stressed his work of his family foundation supporting veterans, tacking homelessness in the U.S. and helping young people find jobs. All of those efforts, he said, tie back to his upbringing. “I grew up in public housing,” he said. “I still that carry with me today.” 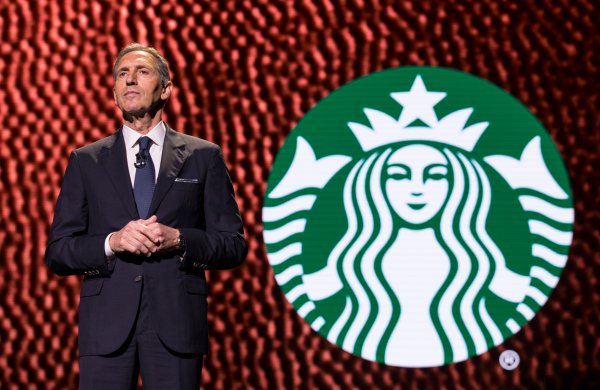 Starbucks Chairman Says Racial Bias Training Is 'Just the Beginning' of Its Commitment to Diversity
Next Up: Editor's Pick