Young men wait to take part in an annual pow wow and rodeo in Toppenish, Wash. The boys are members of the Coleville and Yakama tribes.
Gordon King—Yakima Herald-Republic/AP
By Katy Steinmetz

Washington’s Yakama tribe lives on a one million-acre reservation in the southern part of the state, a relatively small patch left after nearly 12 million acres was ceded to the U.S. government by the nation in 1855. As state officials are racing to build one of the world’s first legal marijuana markets, tribe officials are making it clear that their reservation wants no part of it—and they don’t want anyone else growing or selling cannabis on their ceded land either, to which they maintain certain rights. But it remains unclear whether they have the legal authority to make a demand that affects nearly a third of the land area in the state.

The laws that govern American Indian reservations have long been confusing. Many tribes are subject to only their own laws and federal law, while certain reservations are under state jurisdiction. Now adding to the confusion in Colorado and Washington is the uncertainty about how those states can legally regulate a substance still considered illegal by the federal government. And while many Yakama are anxious to keep the marijuana market far away—fueled by concern about substance abuse—other advocates for American Indians are mad that tribes can’t enjoy the new freedoms that other state residents have.

(MORE: Seattle vs. Denver: Which State Wins the Doobie Bowl?’)

People in Colorado and Washington who don’t live on reservations “are moving forward with this massive experiment,” says Troy Eid, chairman of the Indian Law and Order Commission, a national advisory body focused on criminal justice in Indian territory. “And, once again, these tribes are getting screwed.”

The Washington State Liquor Control Board is tasked with shaping the new market in that state. Right now, they’re sifting through more than 7,000 business license applications from residents who want to farm marijuana or run pot shops, and they plan to start issuing those licenses in March. This is where leaders from the Yakama tribe have addressed “several hundreds” of letters, each “pro-objecting,” as their attorney George Colby puts it, to individual applications made from areas the tribe occupies or once did. “Citizens of the state of Washington don’t get to vote on what happens” in those areas, he says. “The federal government wasn’t supposed to let alcohol come on the Yakama reservation, and thousands of people have died. We’re not going to let that happen again.”

There is little question about tribes in Washington being able to prohibit marijuana use among their own people on their own land (though there is some question about “tribes’ ability to regulate non-member conduct on the reservation,” the attorney general’s office says). The big unknown is how much authority they have over sprawling ceded lands, acres that were essentially handed up to the federal government more than 150 years ago with the promise that tribes would retain certain rights to those lands in perpetuity. In the Yakama’s case, members still have the exclusive right to hunt, fish and gather food on those 12 million acres.

Eid, an expert in tribal law appointed to his position by the president and Congress, says that while it’s not “absolutely clear,” he believes the Yakama do have the ability to object to marijuana being grown or sold on ceded lands. Meanwhile, the Washington state liquor board says they’re still planning to issuing licenses to businesses in those areas. “Objections are made all the time to licenses,” says spokesman Brian Smith. “You want to make sure you’re operating within the law as you know it, and that’s what we’ll be doing here.”

Neither side knows for sure, and that is a recipe for the conflict to end up in court, which might in turn force the question of how the discrepancy between state and federal law is going to be remedied when it comes to marijuana. The Washington attorney general’s office tells TIME that they will defend the liquor board if they’re sued, but that “the Liquor Control Board is still in the process of issuing licenses so it would be premature to speculate on the issue of how a court might rule on the issue of licenses on ceded lands.” Colby says that they will request the federal government to intervene if their ongoing pre-objections are not heard.

Other tribes in the state have yet to weigh in but Eid says that they are likely to stand with the Yakama, if only to make sure their rights to their own ceded lands remain as robust as possible. He also says that it would be ideal if everyone sat down in a room together and hashed out the issue. “They can work out what the scope of marijuana use and cultivation and distribution and so on could be,” he says. “They ought to be able to come to a voluntary agreement that would enable them to avoid any issues involving litigation.”

When Eid is not working on the commission, he acts as counsel for the Ute Mountain Ute tribe, one of two in Colorado. Unlike the Yakama reservation, where state law enforcement has some authority, reservations in the Rocky Mountain State are bound solely by federal and tribal law. That means that while reservation-dwellers in Colorado were allowed to vote in favor of Amendment 64, the proposal that legalized recreational marijuana, it remains illegal to grow, sell or smoke on their reservations as it ever was. (La Plata County, one of two with large American Indian populations, voted to approve the measure by 62% to 38%.)

Some of the American Indians in Colorado view their current situation as a missed business opportunity. “Capital is flowing in here from all over the world,” Eid says. “The tribes are going to be left behind, because there’s been no change in state law that applies to them … These are some of the poorest areas in the country. They could be involved in this business as well, but instead they’re being prohibited from being part of what’s happening.”

One way or another, the federal government may have to weigh in on the issue, whether it’s Congress eventually giving tribes the authority to decide whether they want to legalize marijuana or a federal judge ruling on the status of ceded lands. “This is one of so many of the issues that we are pushing through,” says Smith. “We’re sort of the pioneers here. But we continue onward, into some unknown territory.”

VIEWPOINT: The Search for the Real Numbers Behind Marijuana Use 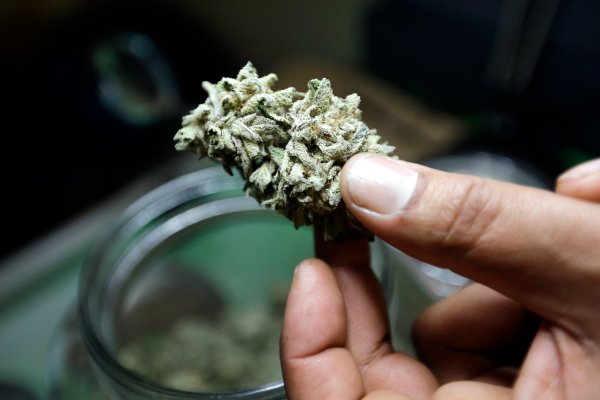 Alaska Next In Line To Legalize Marijuana
Next Up: Editor's Pick