The distressed whale was found last Monday in a canal in southern Thailand near the border with Malaysia, according to officials from Thailand’s Department of Marine and Coastal Resources. A veterinary team rescued the whale and attempted to “stabilize its illness,” according to AFP, but it died Friday after vomiting five plastic bags. An autopsy exhumed 8 kg (more than 17 lb) of additional plastic rubbish from the whale’s stomach, the department said in a Facebook post.

The department’s chief theorized that the whale had mistaken the plastic bags for food, but after eating them had become “sick and unable to hunt for food,” Reuters reports.

The pilot whale wasn’t the only recent casualty of ocean pollution; in April, a 33-foot sperm whale found dead on a Spanish beach had more than 60 lb of garbage in its digestive system.

Around the world, 8 million tonnes of plastic waste ends up in oceans every year, comprising 80% of all ocean litter, according to the U.N. Environment Programme. A March study found that a collection of 1.8 trillion pieces of trash in the Pacific Ocean known as the Great Pacific Garbage Patch could amount to 16 times more waste than previously thought.

Thailand is one of the largest consumers of plastic bags, which are believed to kill hundreds of marine creatures off its coasts every year. In May, the Thai government said it was considering a introducing a tax on disposable plastic shopping bags or introducing biodegradable alternatives to cut down on plastic waste, according to the Bangkok Post. 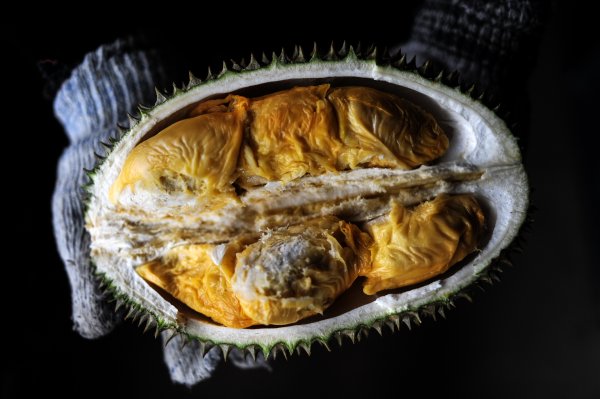 Thailand Wants to Send the World's Smelliest Fruit Into Space
Next Up: Editor's Pick