'It's Not a Disability, It's a Super Power.' Kanye West Opens Up About His Mental Health And New Album

Kanye West got real at the listening party for his new album YE on Thursday, talking about mental health and what the album means to him in a video interview.

West held an outdoor listening party for YE in Jackson Hole, Wyo. and sat down for an interview with radio personality Big Boy. He opened up about being diagnosed with “mental issues” late in life.

“I’m so blessed and so privileged because think about people that have mental issues that are not Kanye West, that can’t go and make that [music] and make you feel like it’s all good,” West said. “I’d never been diagnosed [as bipolar] and I was like 39 years old… That’s why I said on the album, ‘It’s not a disability, it’s a super power.'”

The cover of West’s new album has the phrase “I hate being Bi-Polar it’s awesome” written in his handwriting across a photo he took in Wyoming on his iPhone on the way to the listening party, according to a tweet from his wife, Kim Kardashian West.

West didn’t shy away from acknowledging his recent controversial comments about slavery, in which he said it was “a choice.” He told Big Boy he revamped the album lyrics following the public backlash.

“We just sat there and really honed in on the words,” he said. “It was just too sensitive about that topic and stuff.”

He also discussed what went into making his eighth solo album, including listening to himself in order to create an album that made him happy.

“I think it came from me just going against mass opinion and I was able to find my voice,” he said. 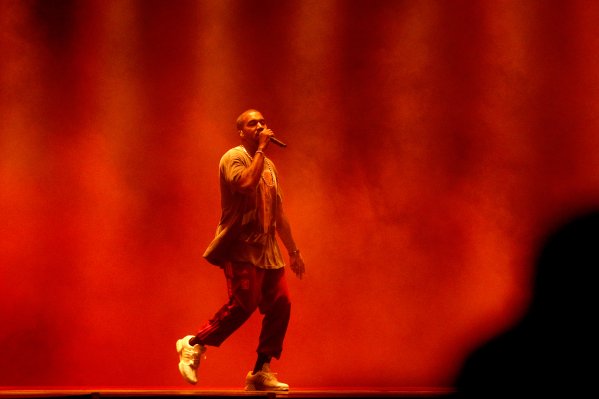 Review: Ye Is an Uneasy Look at Kanye West’s Life as a Walking Contradiction
Next Up: Editor's Pick