The political arm of the Koch network, long reputed for championing conservative causes and politicians, has launched an ad campaign thanking a Democratic Senator up for reelection in a red state for her work in passing a financial deregulation bill.

The ad campaign, released on Friday by Americans for Prosperity, thanks North Dakota Sen. Heidi Heitkamp for her leadership role in working on the Regulatory Relief and Consumer Protection Act, which President Trump signed into law last month. The bill eases regulations on local and regional banks in order to improve their ability to provide loans and mortgages

“This was a bipartisan effort made possible by lawmakers like Heidi Heitkamp who put politics aside to work together,” said AFP President Tim Phillips. “While we don’t agree with Sen. Heitkamp on everything, particularly her vote against tax relief, we commend her for taking a stand against the leaders of her party to do the right thing.”

“We hope to find common ground and work with Senator Heitkamp on other issues moving forward including making tax relief permanent,” Phillips added.

Heitkamp is one of 10 Democratic Senators defending a seat in a red state that President Donald Trump won by double digits in the 2016 election. In November, she will likely face Rep. Kevin Cramer, who was heavily recruited by Trump, and was thought to be one of the Republican Party’s bright spots in the midterm elections. (The nonpartisan Cook Political Report has the race listed as a toss-up.)

Heitkamp’s campaign issued a brief statement in response to the ad, stating only that the Senator would continue to rise above the partisan fray. The statement did not explicitly thank AFP for the support.

“Heidi got results for rural North Dakota families and businesses who depend on relationship lending because she is and has always been focused on putting partisan politics aside to deliver for North Dakotans — and that’s where her focus will remain,” said Julia Krieger, communications director for Heitkamp’s reelection campaign.

Although the group did not disclose how much money it had spent on this campaign, the decision to pinpoint Heitkamp seems significant, and not just because she is a vulnerable Democrat up for reelection, who AFP targeted three months ago with a $450,000 ad campaign in North Dakota that pointed out her vote against last year’s tax reform bill and derided her as a politician beholden to special interests.

Heitkamp was key to shepherding this bill forward; she had been working on writing and negotiating it since 2013. But four of her colleagues who are facing similar electoral predicaments – running as a Democrat in a red state where the President is exceedingly popular – also co-sponsored this bill and were active in negotiations. Donnelly’s campaign called him an “architect” of the legislation after it passed, and Tester’s office has emphasized how he broke with his party to push it through Congress. Donnelly’s campaign sent out a statement highlighting the Senator’s work on it, calling him an “architect of the bill.”

But Americans for Prosperity did not mention any of these lawmakers, in their announcement, although they made a point of thanking three other Democratic Senators – Colorado’s Michael Bennet, Alabama’s Doug Jones, and Virginia’s Mark Warner – who had signed on and are not up for reelection. (Five Republican Senators were singled out as well.)

A representative for the Donnelly campaign said they were not concerned by being left out of the ad. AFP has also spent millions so far in ads in Indiana and Missouri highlighting McCaskill and Donnelly’s votes against the tax reform bill.

“AFP may not be thanking Joe because Mike Pence has asked them not to. That doesn’t really matter. Hoosiers are thanking Joe,” said Will Baskin-Gerwitz, Communications Director for Donnelly’s reelection campaign. 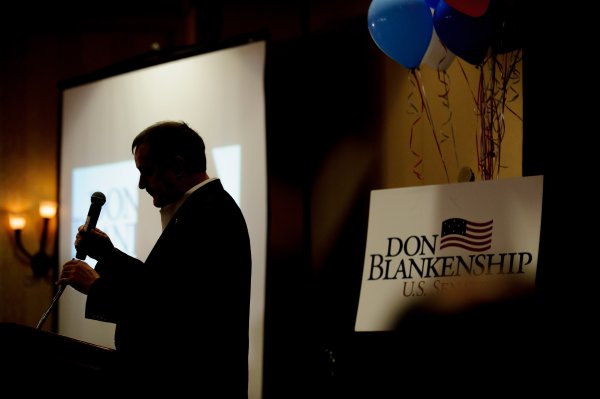 Are American Voters Acting Normal Again?
Next Up: Editor's Pick