Top Republicans in Washington are increasingly skittish that heir apparent Kevin McCarthy lacks the support to succeed Speaker Paul Ryan atop the House Republican conference, paving the way for an ugly leadership fight that yields a dark horse candidate or a strident ideologue.

McCarthy is already working to line up support behind the scenes. But his ascension is unlikely to be smooth, according to interviews with 15 senior Republicans on Capitol Hill and their allies. These Republicans expect a challenger to emerge from the right-wing Freedom Caucus. More intriguingly, they believe that divisions among the GOP’s Establishment bloc may create an opening for a compromise candidate such as Rep. Kevin Brady of Texas, chairman of the powerful Ways and Means Committee, or Rep. Mark Walker of North Carolina, the chairman of the conservative Republican Study Committee.

McCarthy’s office says repeatedly that there is no Leadership race to discuss because Ryan is still in the job. Ryan has backed McCarthy, the House Majority Leader, as his successor in what the Speaker called “a seamless transition.” The White House also seems to support him. McCarthy is close with President Donald Trump, whose daughter, White House senior adviser Ivanka Trump, will join the six-term California congressman at events in Los Angeles and Fresno, Calif., on June 18. McCarthy, already a respectable fundraiser, is making the rounds to assure deep-pocketed patrons that he can bankroll the party machine. McCarthy is well-liked and has plenty of support among rank-and-file Republicans. He carefully tends to younger members, in part by helping to ensure that every GOP newcomer successfully passes a piece of legislation, and spends untold hours replying to messages from members up and down the political ladder.

Yet there are nagging doubts about his candidacy. Some colleagues worry about the sincerity of McCarthy’s conservatism. McCarthy has amassed a staunchly conservative voting record, but he seldom criticizes Trump. Some Republicans aren’t sure that McCarthy is willing to buck a President who has trampled traditional conservative values. “There is no Republican Party. There’s a Trump party. The Republican Party is taking nap somewhere,” former House Speaker John Boehner said Thursday as he met with conservatives on Mackinac Island, Mich. A McCarthy Speakership, some Republicans fear, could further cement the President’s takeover of the GOP.

It is also lost on no one that McCarthy has tried for the job before and failed. In 2015, he tried to replace Boehner, but withdrew from the race suddenly on the morning of the vote, opening the door for Ryan to be drafted into a role he still says today he never wanted.

The reason for McCarthy’s withdrawal remains the source of much sotto voce speculation. The most plausible explanation is that, during days of private talks, members told McCarthy that he didn’t have enough votes and a new candidate needed to step forward. At the same time, a whisper campaign against him started to get louder.

On the eve of the Speaker vote, Republican Rep. Walter Jones sent a cryptic letter to the No. 4 House Republican, Cathy McMorris Rodgers, that urged anyone who had committed “misdeeds” to step aside, lest they repeat former Rep. Bob Livingston’s fate. Livingston’s bid for Speaker in 1998 was derailed by the disclosure of an affair. (Jones told Politico at the time he was not referring to anyone specific.)

Then, on the day of the vote, a GOP donor sent around an email, obtained by The Huffington Post, threatening to expose an alleged affair involving McCarthy. That email also invoked Livingston. The message also contained no evidence to substantiate the rumors.

McCarthy and his aides have consistently denied the rumor, and no one has ever provided any evidence of an affair. McCarthy’s office, contacted by TIME, declined to comment. But the dramatic denouement to his first run hangs over many discussions of his current positioning for the job. Nine of the 15 people interviewed for this article brought up the unsubstantiated affair. Speaking of both the rebellion from the far-right and worries about his personal life, one top House Republicans adviser asked simply: “What has changed since 2015?”

McCarthy’s savvy as a politician, for one. Just hours before Ryan announced his resignation to fellow lawmakers, McCarthy asked to speak with fellow members of the GOP Leadership team. Accounts differ on the exact words exchanged, but it was clear McCarthy was asking for pledges of support from Rep. Steve Scalise, the No. 3 Republican in the House, and his deputy, Rep. Patrick McHenry. In exchange, the suggestion went, he would help them keep their place in the pecking order.

Later that week, Ryan indicated to reporters that Scalise was backing McCarthy. A more precise version of the meeting is that Scalise said he “wouldn’t run against Kevin,” leaving himself wiggle room. Feeling boxed in by Ryan, Scalise put out an endorsement rather than inviting months of speculation about a brewing leadership fight. But there are signs that top Republicans don’t believe him. When the White House summoned the Republican Leadership from the House and the Senate to dinner the night Ryan made his announcement, both McCarthy and Scalise were invited.

Many members think Scalise could still make a play for the top job. After all, Scalise survived an assassination attempt in 2016 and his treatment has gone according to schedule. Like McCarthy, Scalise is well respected in the conference, according to members, their aides and GOP donors. Scalise did a turn in 2012 as the recruitment chief for the GOP’s House elections committee, which spent more than $156 million to defend the majority McCarthy helped to recruit two years earlier in the same role. Later, Scalise ran the powerful Republican Study Committee, a post where he won allies by pushing a fiscally and socially conservative policy agenda.

But while Scalise has made a tremendous recovery from the shooting, the Speaker’s gig requires near-constant travel to pick up checks, and many worry he won’t physically be up to it—although few say so explicitly. Scalise’s allies dismiss this, noting he raised a record amount of money in the first three months of this year for someone in his position, is on track to do it again in the March-to-May window, including almost $500,000 last week alone. Scalise’s allies also note he led a 10-day congressional delegation to Morocco, Spain and Switzerland.

It won’t be easy for anyone to round up the 218 votes needed to become Speaker once the race actually starts in earnest. And this assumes the GOP keeps its majority this fall. Republicans at the moment hold 235 seats, giving any winner a scant 17-vote margin for defections.

That’s where the hard-line Freedom Caucus comes in. Time and again, this group of 30 to 50 members has derailed the party’s plans—including McCarthy’s 2015 bid for Speaker, Ryan’s early attempts to repeal Obamacare in 2017 and this spring’s failure of an immigration plan and the massive farm bill. They could do so again in the leadership race.

Rep. Mark Meadows of North Carolina, the chairman of the Freedom Caucus, has told reporters he has given “zero consideration” to the Speaker role. But he’s also crowed that it’s impossible to get to 218 votes without his members; the right-wing website Breitbart has dubbed Meadows “the acting Speaker.” It was Meadows who set in motion Boehner’s exit by triggering a procedural chain of events that would have forced the Speaker to weather a no-confidence vote. It’s part of the reason why McCarthy and Meadows have worked to build a better relationship than the one Boehner had with his right flank. McCarthy partnered with Meadows on a Balanced Budget Amendment and is working with him on a possible second round of tax cuts.

Some Tea Party-styled groups, along with Fox News host Sean Hannity, have also pushed Rep. Jim Jordan of Ohio for the Speaker role. (Hannity is particularly influential with the President.) Jordan says he’s open to running.

The power of the Freedom Caucus puts McCarthy in a tough spot. If he tries to appease these rabble-rousers—many of whom he befriended when he ran candidate recruitment for the GOP in 2010’s Tea Party wave—he risks alienating the party’s moderates, whom he can’t win a leadership race without.

That’s one reason why Republicans on Capitol Hill have increasingly been talking up other possibilities. Brady, the Ways and Means chairman, is one potential candidate. He helped guide the GOP’s tax cuts into law and has shown a willingness to work across the party caucus, especially as it considers another round of tax cuts before Election Day. As head of the RSC, Walker heads up a group that counts about two-thirds of the conference as members. Another name could be Rep. Rob Bishop, a Utah lawmaker and former NRA lobbyist who says if he wins in November it will be his last term. If the GOP is looking for a transitional figure to steer the party through the 116th Congress—when all eyes will be on the White House races—it could do worse than select a Mormon from a safe district.

How the drama ends is unknowable at this point. But the under-the-surface tensions speak to just how little unity exists inside today’s Republican Party. 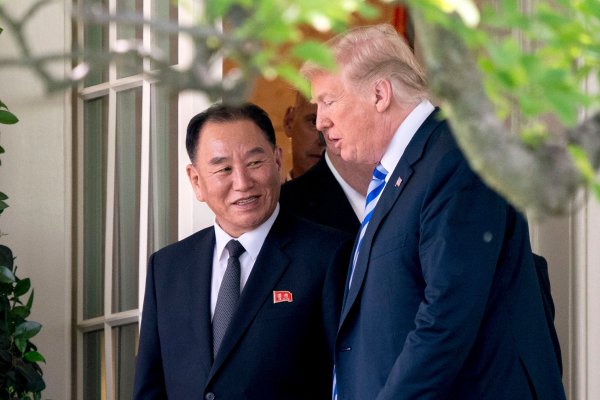 North Korea Summit Is Back On
Next Up: Editor's Pick