Pentagon Official Says U.S. Can 'Take Down' Man-Made Islands Like Those in the South China Sea

Amid heightened tensions brewing between China and the U.S. military in the South China Sea, a Pentagon official on Thursday said the military has experience “taking down” small islands.

“I would just tell you that the United States military has had a lot of experience in the Western Pacific, taking down small islands,” Marine Corps Lt. Gen. Kenneth McKenzie said in response to a reporter asking about whether the U.S. has ability to “blow apart” China’s controversial man-made islands.

McKenzie, the Pentagon’s Joint Staff director, added later in the briefing that he was stating “historical fact” and not trying to send a message to China.

“We have a lot of experience, in the Second World War, taking down small islands that are isolated,” he said. “That’s a core competency of the U.S. military that we’ve done before. You shouldn’t read anything more into that than a simple statement of historical fact.”

But McKenzie’s comments come amid an escalating standoff in the controversial waters.

Since 2014, China has built artificial islands on top of reefs and rocks in the heavily contested territory. As those islands have become increasingly militarized despite Chinese leader Xi Jinping’s pledges to the contrary, the U.S. has ramped up “freedom of navigation” operations, or FONOPS, to demonstrate rights to the sea under international law.

Earlier this week, China dispatched warships to confront two U.S. Navy vessels conducting such an operation near the disputed Paracel Islands. According to Beijing, the operation “seriously violated China’s sovereignty.”

This clash was followed by the outgoing head of the newly-named U.S. Indo-Pacific Command, Adm. Harry Harris, calling China the “biggest long-term challenge” to the U.S. during a military handover ceremony on Wednesday.

The escalating South China Sea tensions come amid the Trump administration seeking China’s support in lining up a summit with North Korea that could be held as early as June 12. 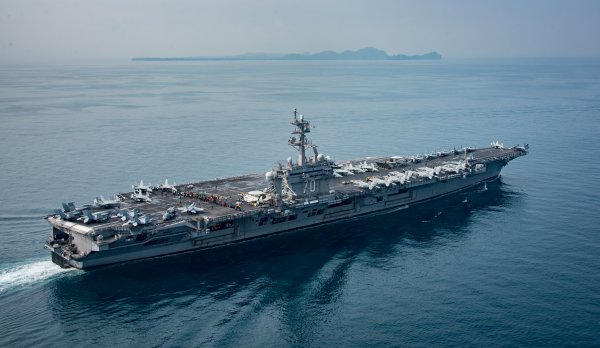 U.S. Pacific Command Gets a New Chief and a New Name
Next Up: Editor's Pick