Another election, another polarized outcome. Last weekend’s first-round results in Colombia’s presidential election signal just how bad things have gotten there. The country must now choose between a right-wing Senator in Ivan Duque and a far-left former Bogota mayor in Gustavo Petro. The smart money is on Duque. Here’s why:

1. An unpopular incumbent and a tarnished elite

President Juan Manuel Santos currently has an approval rating in the low 20s, down from the 74 percent he entered office with in 2010. Colombian voters used elections this weekend to send Colombia’s political establishment a message: centrists need not apply. Duque took 39 percent of the vote to 25 percent to Petro. They far outpaced more moderate candidates, including Santos’ former vice president and his lead peace negotiator. Duque and Petro will now face off in a second-round run-off on June 17.

Both have distanced themselves from Colombia’s political class, which has been badly tarnished by a Brazilian corruption scandal that has spread across Latin America. About a year ago, President Santos acknowledged that, unbeknownst to him, his campaign received illegal campaign contributions from Brazilian construction congolmerate Odebrecht… as had his opponents.

Petro’s anti-corruption platform and his unconventional path into politics helps him avoid the taint that falls on establishment politicians. But Duque also benefits from the fact that he is a first-term senator—he spent the decade before he joined congress in Washington DC working for the Inter-American Development Bank, allowing him to credibly claim he stands apart from Colombia’s disgraced elite.

Duque is pro-business and a security hawk. He has the backing of former president Alvaro Uribe (2002-2010), still a popular figure among Colombia’s conservatives. Petro has even more claim to outsider status, having been a rebel in the M-19 guerrilla group back in the 1980s before entering politics and becoming mayor of Bogota. But that mayoral stint did not go well—he was eventually ousted from office after trash began piling up on the streets of Bogota. And although his focus on inequality appeals to many Colombians, the country has never elected a leftist president.

Why is Duque in pole position? First is the still-controversial 2016 FARC peace deal. The original deal was put to a referendum and narrowly defeated. 50.2 percent voted no. For many Colombians, the peace deal—which opened a path to political participation for FARC members while allowing many to avoid jail sentences—was too lenient, given the 200,000+ lives lost as a result of FARC-Colombian government clashes and the 7 million people that violence displaced. Santos made changes to the deal, and then put it to a congressional vote rather than a public one. That decision closed the deal. It won him a Nobel Peace Prize—and the ire of many Colombians.

Petro supports the FARC deal and campaigned to uphold it, but Duque wants to rewrite parts of the deal to punish former FARC members, and campaigned on a harder security line more broadly.

Colombia’s growth is highly dependent on oil, which accounts for 35 percent of export earnings. It was one of the countries hardest hit by oil prices that began to tumble in 2014. To shore up the country’s finances, the Santos administration introduced an unpopular tax hike in 2016, which included a 3-point increase in the Value Added Tax (VAT).

Duque has billed himself as the pro-business candidate and has vowed to cut corporate taxes and support oil and mining projects to spur growth, all while slashing “unnecessary” spending and fighting tax evasion to get Colombia’s books in order. That has raised fears of a looming revenue gap. Petro, meanwhile, has focused on the country’s rampant inequality and promised big spending increases on education and healthcare, while also vowing to simultaneously wean the country off its oil (and coal) dependency.

5. The specter of Venezuela

Petro’s anti-corruption platform has turned him into a real contender in this election. But he has the misfortune of running at a time when neighboring Venezuela is imploding. More than 200,000 Venezuelans streamed into (and through) Colombia last year to escape crushing poverty and lack of basic goods and medicines, a six-fold increase from the year before.

The perpetually looming collapse of Venezuela is a constant reminder to voters of Petro’s former admiration of the late Hugo Chavez, one that haunts him despite declaring himself a “strong adversary” of Chavez’s successor, current Venezuelan president Nicolas Maduro. For a country that has never voted for a leftist candidate, the association with someone like Chavez is a heavy burden.

The wider trend in Latin America for unpopular governments and angry voters has benefited each of these candidates. But whoever wins will also inherit the other defining feature of anti-political establishment fury — high expectations. 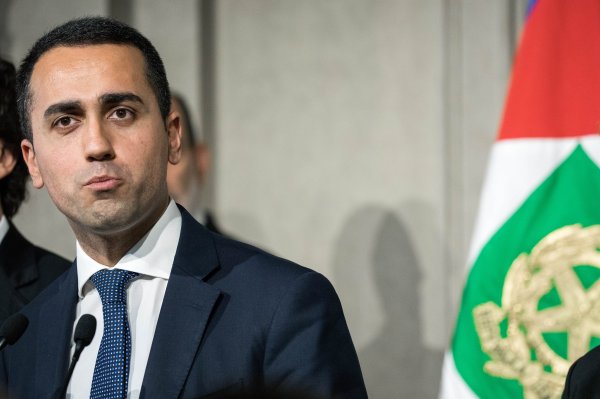 Five Things to Know About Italy's Populist Coalition Government
Next Up: Editor's Pick