This photo taken on April 9, 2018 shows a crowd of tourists on the Maya Bay beach, on the southern Thai island of Koh Phi Phi. Across the region, Southeast Asia's once-pristine beaches are reeling from decades of unchecked tourism as governments scramble to confront trash-filled waters and environmental degradation without puncturing a key economic driver.
LILLIAN SUWANRUMPHA—AFP/Getty Images
By Raisa Bruner

Sad news for beach lovers everywhere today: the Thai beach made famous by Leonardo DiCaprio in the 2000 Danny Boyle film The Beach is being temporarily shut down, effective June 1, to tourists.

Maya Bay on Ko Phi Phi is a picturesque strip of white sand, backed by dramatic rock cliffs and surrounded by water that shines a turquoise blue. But thanks in part to its starring role in the DiCaprio adventure movie based on the book by Alex Garland, tourists have flocked en masse to the small space for years — and the environmental damage is beginning to show.

“We are a beautiful country but we have to protect our natural resources,” Thon Thamrongnawasawat, an advisor to Thailand’s national parks department, told the BBC. “We have significant information that all the boats that come in and out really impact the coral reef.” He added that it won’t be closed forever — they’re planning on reopening it in the fall — so that’s the good news.

DiCaprio himself is an avowed environmental advocate who has supported organizations that protect coral reefs and work to inhibit damage on natural ecosystems.

This isn’t the first time Maya Bay has struggled with degradation. Back when The Beach was filmed, Thai authorities allowed 20th Century Fox to make some cosmetic adjustments to the landscape — leveling and widening the beach, removing some native plants and adding new ones — that caused something of a controversy at the time. 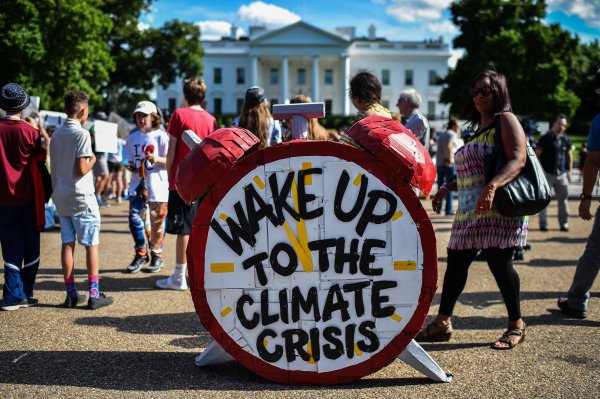 Blocked by Trump, Climate Change Activists Focus on Cities and States
Next Up: Editor's Pick