Supporters of the political Movement 5 Stars before the rally of the leader Luigi Di Maio.
Marco Cantile—LightRocket via Getty Images
Ideas
By Angelos Chryssogelos
Chryssogelos is a research fellow at the Weatherhead Center for International Affairs, Harvard University and an associate fellow at Chatham House.

Europe was set to enter a new period of political uncertainty after two populist parties in Italy, the Five Star Movement and the League, agreed to form a new government together. The coalition was ultimately thwarted by President Sergio Mattarella’s veto of the two parties’ proposed finance minister.

But Italy, the eurozone’s third and the world’s eighth-largest economy, came very close to finding itself run by two populist parties that have in the past expressed deep skepticism of Italy’s membership of the eurozone, as well as opposing EU policies on migration. And with a new election likely in the offing, a Five Star–League government may only have been postponed by a few months.

Italy is a country where the two major EU crises of previous years cross paths. Italy has suffered both from long-standing economic malaise, made more acute in the years of the eurozone crisis, and a mounting migration crisis in the Mediterranean. In both cases, Five Star and the League fostered the perception of many Italians that the EU not only failed to help but outright harmed Italy by imposing upon it punishing economic reforms and leaving it without help to manage the influx of refugees on its shores.

Ideally, Italy’s close brush with a full-blown populist government would concentrate the attention of EU elites on the effort to overhaul Europe’s economic governance and management of its external frontier, with an eye to developing more sustainable and equitable policies. Italy is indeed the final frontier of the decade-long governance crisis of the EU: a founding EU member, its fourth-largest country and traditionally a pro-European society, Italy faces very real policy challenges that are seen by its electorate as closely intertwined with its membership of the EU and the eurozone.

And yet the populist almost-coalition in Rome seemed to elicit a different kind of reaction. Political commentators across Europe were quick to frame the Five Star–League partnership as one more episode in the long march of populism in Western democracies. After the defeat of Marine Le Pen in French presidential elections last year gave way to talk that the populist wave might have ebbed, Italy’s potential new government vindicated those who argue populism, illiberalism and even authoritarianism continue to be Europe’s main problem today.

Of course, one cannot deny that these are testing times for liberal democracy in many parts of Europe. To the extent that populism has an ideological belief system, it is its understanding of democracy as a direct and majoritarian mode of political representation that supersedes institutional checks on the will of the many like independent regulators, central banks and the judiciary. Populism can indeed become a threat to democracy if populists in power undermine liberal institutions and enable the emergence of illiberal democracy that can, with time, degenerate into outright electoral autocracy.

Read more: The E.U. should be deeply disturbed by the role it played in pushing Italy toward the populist fringe

Yet the obsessive focus in much of the political, policy and journalistic debate on populism’s challenge to liberal democracy misses an even more important aspect to the story: that in most cases the rise of populism feeds off very real policy failures and very legitimate popular reactions to them. This is particularly true in a context of continental integration that seems to be increasingly unbalanced between a relatively prosperous and sheltered core of northern and western European states and an increasingly powerless periphery bearing the costs of adaptation to economic hardship and the migration crisis.

Again, the point is not that populism does not challenge liberal democracy in Europe. It is rather that the electoral success of populist parties is not necessarily or even primarily a danger to democracy in all cases. Often the rise of populists reflects obvious policy failures and public frustrations that EU and national elites can ill afford to ignore. After all, very few believed that Five Star and the League would or could institute an illiberal democracy in Italy, a country with a notoriously sclerotic institutional setup that would frustrate any effort at concentration of power.

EU elites and mainstream commentators have long developed the habit of painting all challengers to the European order with the same brush of ‘populism’ and ‘illiberalism’. It is obviously easier to philosophize about the future of liberal democracy from Brussels, Berlin or The Hague than to admit that, for many parts of Europe, participation in structures of economic and migration policy cooperation will soon be politically and socially untenable unless the EU seriously reforms its functioning in the direction of more burden-sharing and solidarity.

The real challenge that the would-be populist coalition in Italy was going to pose to the EU was one of policy, not of democracy. Yet conflating the latter with the former has long allowed EU elites and governments of Europe’s northern core to divert the conversation from their own obligations while holding the moral high ground as defenders of liberal democratic norms. Not unlike socialism in the 19th century and communism in the 20th, populism today is used not as a signal for necessary policy change but as a convenient excuse to dismiss social demands as incompatible with liberal democracy.

Given the size of its economy, popular dissatisfaction with domestic and European elites, and the urgency of the migration crisis on its shores, Italy is the biggest test yet for this elite tactic of dismissal and diversion—moving the discussion from popular frustration to an often barren and prevaricating debate about the “future of democracy.” As another election looms where Italy’s EU and eurozone membership may well be on the line, the question is whether the EU can realize the stakes in time and engage with the real policy failures that lie at the heart of the current democratic malaise in Europe. 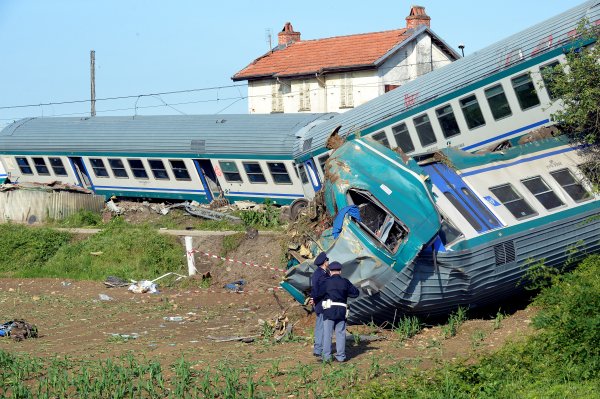