In 2002 and 2003, Allison Pearson and Lauren Weisberger released novels that shook the lives of women privileged enough to aspire to, well, more privilege.

I Don’t Know How She Does It was Pearson’s paean to harried working mothers, with her protagonist Kate Reddy standing in for every woman who has ever tried to juggle three dozen bake-sale cupcakes while clutching a briefcase and teetering on stilettos. Weisberger used the work woes she experienced at Vogue to fashion a monstrous editor in chief for The Devil Wears Prada. Imperious Miranda Priestly, immortalized by a steely-eyed Meryl Streep in the 2006 film adaptation, suffers no fools–especially those wearing the wrong shade of blue.

Both authors return with follow-up titles on June 5. Pearson’s How Hard Can It Be? finds Kate ready to re-enter the workforce after nearly a decade at home with her children; Weisberger’s When Life Gives You Lululemons centers not on The Devil Wears Prada‘s Andrea Sachs but instead on her colleague Emily Charlton (Emily Blunt’s delightfully icy character in the movie). Emily, now a celebrity image consultant, returns to the East Coast from Los Angeles only to discover that a younger set is primed to take over, and she needs to get hip–fast.

The new novels, departing from an era in which so-called chick lit so often reinforced gender stereotypes, prove more adept at framing individual women as whole and human than the previous books were. Each story picks up on a female character 15 years after her last appearance and shows her coping with changes at work and at home. A funny thing happened on the way to 2018: the way Kate and Emily look at the other women in their lives has changed. At the turn of the millennium, other women formed the competition. “I already understood that the world of women was divided into two,” Kate lamented then, “there were proper mothers … and there were the other sort.” She guiltily considered herself the latter. Emily, tormented by Miranda, used to torment Andrea in turn, piling on demeaning tasks and sneaky insults, certain that she would never need anyone’s help.

Now Kate and Emily are 50 and 36, respectively. Kate remains frazzled by her children’s demands, and Emily still wants to look great in a designer bikini. But as they navigate life in their new age groups, both discover solidarity with other women in a way they did not in the original books.

Kate rediscovers her neglected girlfriends as they face the struggles that come with late middle age (including everything from body sags to elder-care nags). Emily unclenches her judgment muscles to bond with a “frumpy” lawyer turned stay-at-home mom who begs for help with another woman’s PR crisis.

That these books are hugely entertaining cannot be assumed–but they are. Pearson and Weisberger know their characters and audiences so well that even their worst jokes elicit chuckles. Of a neutral-toned family room in When Life Gives You Lululemons, Weisberger writes, “It’s like fifty shades of gray without the S and M.” Add laughs to all the warm-and-fuzzy female solidarity and it makes for a pretty great time.

There’s just one glaring problem: in these books, it’s as if London and Greenwich, Conn., are inhabited only by the white and well-to-do. One might hope the next time we see Kate and Emily, their worlds will have expanded, or they will have passed the torch to a new set of put-upon but persevering protagonists–with different backgrounds. I could spend all day imagining titles for more inclusive sequels, like Is That Too Much to Ask? 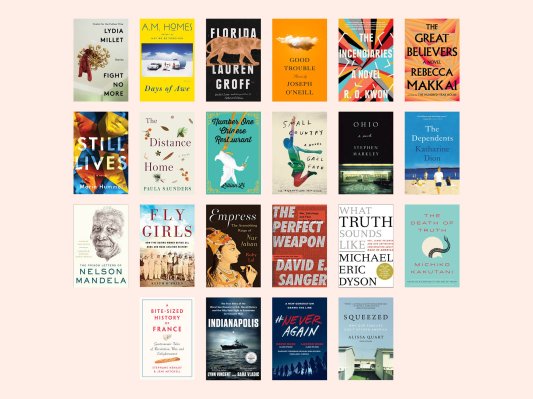 22 New Books to Read This Summer
Next Up: Editor's Pick