I don’t regret my decision to have Layla. Even when she’s behaving like a hormonally ravaged monster, my primal love for her functions as a net. It catches the heinous thoughts that fall from my brain — I could slap her! What would life look like if I had made it through the clinic doors? I could f-cking slap her — shielding my heart from impact. Layla is my greatest accomplishment, which is something women used to be able to say without having to enter the witness-protection program. Because Layla isn’t just a happy accident, or karmic compensation for a past life well served, Layla is a product of grueling and expensive work on my behalf. She is the direct result of my determination not to become my mother. It’s the overachiever in me; it’s my mother in me; it’s exactly who I did not want Layla to become.

I took the money our mother left for us in her will and I invested it wisely — in the right asset classes, in Layla’s education, and in self care for myself. I found a good therapist, who referred me to a better therapist who specialized in intercultural parenting, who taught me that being a single mother to a biracial child is not the same as being a single mother. I learned to untangle love from hubris. I learned that I am wired to make my daughter feel less loved if she goes to a state school instead of Dartmouth, and while I can’t change that instinct, I can learn to recognize it, and choose not to respond to it.

I took notes on how to discipline with compassion. I signed Layla up for dance class, music class, horseback riding lessons, swim team and Little League, and when she didn’t take to any of these extracurriculars I didn’t panic (outwardly) and I didn’t force her to continue. I told her that she was allowed to quit anything, as long as she gave it a fair shot and had taken the time to think about what sport or skill she wanted to try her hand at next. When an Imazighen woman sent us woven welcome mats as a thank you for her bike, Layla was the one who came up with the idea of starting an online store for Berber goods, and she executed the concept, soup to nuts. She has thrived in her position as “online shop coordinator,” and above all, she is happy (for the most part) and healthy (which accounts for the times she is not). She is not beholden to anybody’s expectations for her life but her own.

I am immensely proud of myself for raising a moody teenager with a passion, though that’s not something I would ever say out loud to Brett. It’s too dear a triumph for me to risk hearing her pooh-pooh it, or insist that she had it worse than me growing up, being the fat one, the dumb one, the lemon. Brett looks at most things through a binary lens — if she had it bad, I must have had it good.

I am always the first to say that my sister did not have it easy growing up. Our mother failed her, time and time again. But it was a pain that built Brett’s character. She was forced to create a vision for her life and how she wanted it to turn out, because no one else was going to do it for her. It’s why she’s the talent, and I’m stuck being the Chantal Kreviazuk of the B-corp world. Do you know who Chantal Kreviazuk is? It’s okay. I don’t expect you to, and it’s sort of the point. Chantal Kreviazuk is a classically trained pianist, singer and songwriter who has written hits for behemoths like Kelly Clarkson, Avril Lavigne, Christina Aguilera and Drake. She’s released a few albums along the way, trying to make it on her own name. One had moderate success in Canada.

I’ve been writing the hits, and I deserve credit, and not just in Canada. I am SPOKE’s bookkeeper, ambassador, hiring manager, human resources department, janitor, publicist and receptionist. I’m the duck’s feet, treading furiously beneath the surface of the water, so that the Big Chill can appear to glide across the lake with no effort at all. It was true that Brett made a better face for the company. I have to give my sister credit — she forecasted the trend of authenticity and she engineered a way to monetize it. No one wants to hear the pretty, skinny girl’s story anymore. They want the story from the slightly overweight, tatted-up though still camera-friendly girl who was tortured and made to feel like a freak because she liked girls. The girl who had no choice but to develop grit and spunk, to look out for herself. These are the stories we like to hear nowadays, so Brett enhanced hers, ever so slightly.

“Do you want to know what I think?” Jesse asks, and I nod before I even realize I’m nodding, feeling like a ventriloquist’s dummy.

“The patriarchy survives so long as women are pitted against one another. It is a threat to a man’s way of life when women gather, when they question the status quo, and when they inevitably start to resist it. That’s what this season was about. Strong women apart, who were becoming stronger together. And it scared the sh-t out of him.”

What is it to be a strong woman? I’ve been thinking about it a lot, recently, and I’ve decided it has to do with taking responsibility for your actions, even when it feels like you didn’t have a choice in the matter, because you always have a choice. At the reunions, the women are always carrying on about owning it. You did this. You did that. Just own it! They harp this, over and over, until they’ve beaten the catchphrase out of you. Fine. Fine! I did delete your app to free up some storage. I own it!

Owning it is better than an apology, better than retribution, better than an empty promise to change your ways. Because being forced to own it shows that you recognize how far you’ve orbited from a common and decent sense of self-awareness. And the longer you spend on a reality show, the more elusive the trait of self-awareness becomes, thereby increasing its intrinsic value. But a little-known fact about declaring ownership is that it’s not just a victory for the person who has harassed you into submission. Those three words — I own it — also act as an astronaut’s braided steel tether, preventing you from floating away into oblivion.

No one but Jesse knows that I have anything to own right now, but I do. How we’re saying it happened is not how it happened. I want people to believe our story. Partially because I know Brett would have wanted it this way. Lastly, and I hope not mostly, I want people to believe our story because I was tired of standing in the dark while the spotlight shined on my sister unaccompanied.

There. I owned it. 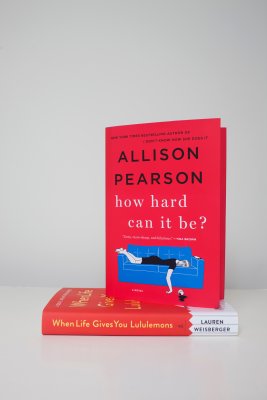 Two Novelists Revisit Beloved Characters After a 15-Year Hiatus
Next Up: Editor's Pick