'We’re Reaching the Climax of This Issue.' Korea Expert Victor Cha on the Prospects of Peace on the Peninsula

On Memorial Day morning, Dr. Victor Cha was not, as many had expected last year, ensconced in the U.S. Embassy in Seoul. Instead he was finishing a workout and driving to his home in Maryland, not far from Georgetown University, where he is a professor of government and international affairs. He spoke to TIME by phone as he pulled into his driveway on a rare day off.

The former director of Asian Affairs at the National Security Council, Cha was President George Bush’s top advisor on North Korea. He is also Korea chair at the Center for Strategic and International Studies and the author of five books. But, more recently, he has been known, as he wryly puts it, “as the guy who almost became ambassador [to South Korea] despite the fact that I have a 30-year record of scholarship and I have done a previous tour of service in government. That’s the thing people like to write because it sounds sexier.”

Washington had formally requested Seoul’s approval for the Korean-American’s nomination, but he was abruptly withdrawn from consideration in January. (Admiral Harry Harris, head of the U.S. Pacific Command, was instead nominated by President Donald Trump on May 18 and awaits Senate confirmation.) Cha’s reported private disagreements over aspects of Trump’s strategy on North Korea were writ large in a January op-ed in the Washington Post, in which Cha wrote that giving Pyongyang “a bloody nose,” in the form of a preemptive strike, should be a non-starter. It would put American lives at risk, he said, and risk a catastrophic war on the peninsula.

“This bona fide hawk wasn’t hawkish enough for this administration” was how the Pyongyang-watcher website, NK News, described Cha in February.

The soft-spoken 56-year-old is philosophical about it. The Seoul embassy has lacked an ambassador since Trump has been in office. But Cha praises the Deputy Chief of Mission Marc Knapper and Commander U.S. Forces General Vincent Brooks for holding the fort while Trump lurched from “fire and fury” to seemingly wanting to befriend North Korean leader Kim Jong Un. He tells TIME that the ultra-hawkish National Security Advisor John Bolton — who has advocated preemptive strikes against North Korea and Iran, and maintains that the decision to invade Iraq was correct — has solid non-proliferation experience to backstop the president, adding that “it’s good to have a hardliner in every government.” He also says there’s no better person to negotiate for the U.S. than South Korean-born American envoy Sung Kim — the diplomat currently in talks with North Korean officials over Trump’s hastily arranged, cancelled, and now seemingly on-again summit with Kim, tipped for June 12. Cha describes him as the “institutional memory” of U.S. negotiations with Pyongyang “going back to the very beginning” of the six-party talks in 2003.

And yet Cha’s experience will surely be missed. While the views of Bolton, Harris, and Secretary of State Mike Pompeo matter, Cha says he is “completely convinced that Trump is the only person that decides” the administration’s high-pressure policy on North Korea.

Trump deserves credit for that policy, Cha says, because “North Korea doesn’t tend to lash out militarily when they feel economic pressure.” But at the same time he warns that Kim won’t give up his nukes. In fact, Cha says Kim wants to meet because “he feels like they’re now secure with this nuclear weapons capability.”

Cha believes that a peace agreement would validate the North as a nuclear state, ensure the Trump administration won’t carry out a military attack, and most importantly remove the U.S. as an obstacle to funding from international financial institutions like the World Bank, the Asian Development Bank, and the IMF.

There are precedents for the U.S. striking deals with Pyongyang. The Clinton Administration got North Korea to freeze plutonium production for eight years between 1994 and 2002 under a system known as the Agreed Framework, but Cha says it sunk because the North was secretly developing a parallel uranium program. Then, President George W. Bush included North Korea, along with Iraq, in his “Axis of Evil” and Pyongyang resumed plutonium enrichment.

The six-party talks, which included China, South Korea, Japan, and Russia, produced a 2005 agreement in which Pyongyang agreed to abandon its pursuit of nuclear weapons in exchange for food and energy assistance. But that deal also collapsed and the following year Pyongyang carried out its first nuclear explosion.

“It’s not hard to get a deal with North Korea” Cha maintains, but “the real question for the president is: are we going to pretend that they got rid of [their nuclear capability], or are we going to make certain that whatever agreement is reached, this will not be a threat to the American people or to U.S. allies?”

The alternative to a deal is a return to the standoff of 2017. Then the stakes could not be higher. A preemptive strike of any kind, as Cha has argued, would only delay North Korea’s missile building and nuclear programs, while endangering the lives of millions. Would Cha have increased the odds of a desirable outcome if he had been the ambassador in Seoul? He refuses to be drawn.

“I believe that every White House has the right to choose their own people, and they also have the right to change their minds if they want to,” he tells TIME, before painting a picture of what’s at stake. “This is a nuclear security threat to the United States that we’ve had to deal with for 30 years, and I feel like one way or another we’re reaching the climax of this issue. It’s deadly serious and, you know, pictures of leaders embracing are great, and they make people feel good, but people have to scratch below the surface and see if these meetings are really making you safer as a country or if they are not.” 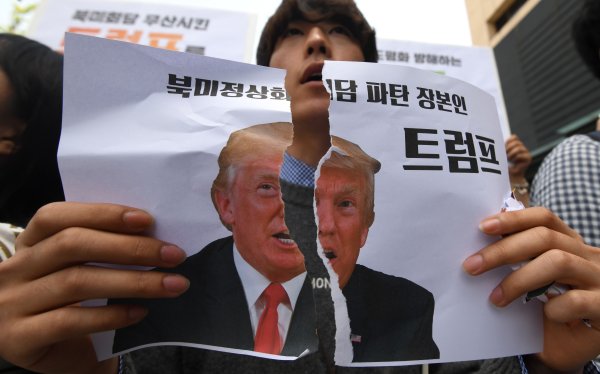 How Seoul Reacted to Trump Quitting North Korea Talks
Next Up: Editor's Pick