Protesters hold placards denouncing President Rodrigo Duterte march towards the 'people power' monument in Manila on February 24, 2018, ahead of the 'people power' revolution anniversary that ousted the late dictator Ferdinand Marcos.
TED ALJIBE—AFP/Getty Images
Ideas
By Chito Gascon
Gascon is the chair of the Commission on Human Rights of the Philippines.

After winning the presidency in the Philippines in 2016, Rodrigo Duterte has pursued a relentless “war on drugs,” employing police forces in a brutal campaign that has often run roughshod over constitutional guarantees of presumption of innocence and other legal due processes. This “war” has resulted in tens of thousands of casualties from deadly police operations or extra-judicial killings, with no end in sight. To date, no person has been held to account for any abuse of authority or human rights violations in these deaths. Impunity—a reality in my country even before Duterte—has reached unprecedented levels.

Later this year, the world will commemorate the 70th anniversary of the Universal Declaration of Human Rights (UDHR). Passed by the U.N. General Assembly in 1948, it was heralded then as a standard by which all nations would abide, to serve as a shield against the horrific atrocities that marked two previous world wars. Since its creation, the world has painstakingly constructed an entire edifice of human rights norms, establishing domestic and international protection mechanisms to ensure the fulfillment of the UDHR’s promise. But that promise has been broken around the world.

In 2014, Eric Posner, American law professor at the University of Chicago, wrote “The Case Against Human Rights,” an essay critically examining how human rights had fared across the globe, and exposing the great chasm that exists between rhetoric and reality in how states behave. Four years later, Posner’s prophetic warnings still weigh heavily upon countries where human rights are existentially challenged. A recent TIME cover story “The Rise of the Strongman” indicated just some of the countries where this is the case, including Russia, Turkey, Hungary and the Philippines.

The appeal of the strongman is not new and has enticed adherents throughout history. Their proposition has always been simple and strangely effective. They pose a false choice, presenting—in a complex society of competing interests—an alternative of greater safety, security, and stability, in exchange for diminished freedoms. This false and even dystopian dichotomy has regained some currency by feeding upon growing public frustration with governments’ inability to make democracy work for all. And that is how strongmen—perceived to be decisive, armed with populist rhetoric in a “post-truth” world, and ready to cut democratic corners—rise to power.

In his book The Future of Freedom, Fareed Zakaria warned of the prospect of illiberal democracy—where populist leaders take advantage of growing public discontent and win elections. Over time they then dismantle—often with popular consent—whatever constitutional guarantees there might be to rights and freedoms, thereby diminishing democratic accountability.

In the Philippines, Duterte’s continued calls to ignore international outrage led the U.N. High Commissioner for Human Rights, Zeid Ra’ad Al Hussein, to declare, “I am concerned by deepening repression and increasing threats to individuals and groups with independent or dissenting views.” The recent International Criminal Court decision to open a preliminary examination into the Philippine death toll has prompted the embarrassing response from the Philippine government of withdrawing from the Rome Statute, the treaty that established the International Criminal Court (ICC). Duterte has also threatened ICC Prosecutor Fatou Bensouda with arrest, should she pursue activities in the country.

Without a doubt, democracy and human rights are in retreat today, and not only in the Philippines, but across all continents. What can be done to arrest this current period of democratic recession?

We can and we must direct a righteous rage toward this trend, in a manner that is both purposive and strategic. The road ahead will be difficult, but we must persevere, building solidarity to affirm a politics of civility and inclusion, while employing non-violent strategies in our parliaments, our courts, our cyberspaces, and our streets. Let us be emboldened by an unrelenting will to stand up for justice, and an undying faith in humanity’s capacity for good. If we do not struggle, we will not overcome. We must push back.

We need more democracy and not less of it, and we must uphold human rights for there is no battle more important today. Democracy and human rights are important enablers of human development that will create conditions for people to reach their full potential. As long as persons in any part of the world remain deprived of their fundamental rights and freedom, we are all diminished.

If we are unable to ensure the respect, protection, and fulfillment of human rights and fundamental freedoms of all—especially the poorest and the most marginalized—then the universal human rights project will indeed mean nothing.

Gascon is a speaker at the Oslo Freedom Forum 2018. 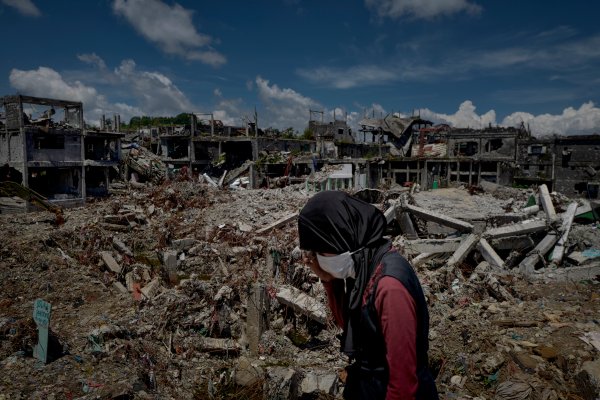 Thousands of Filipinos Still Displaced One Year After Marawi Seige
Next Up: Editor's Pick