Police on Monday afternoon were still searching for an Army National Guard member who was reported missing in the midst of flash flooding that tore through Ellicott City, Maryland, on Sunday, just two years after a 2016 flood devastated the town.

Officials said in a press conference Monday afternoon that they had conducted over 300 rescues in Ellicott City and are still trying to locate the National Guardsman who went missing, Eddison Alexander Hermond, in the floods that swept away parked cars and trapping some residents on the upper floors of buildings.

Here’s what to know about the Ellicott City flooding and recovery efforts:

Who is missing in the Ellicott City floods?

Eddison Alexander Hermond, a 39-year-old active member of the Maryland Army National Guard and a U.S. Air Force veteran, has been missing since about 5:20 p.m. Sunday, police said, asking anybody with information to call 911. Howard County Executive Allan Kittleman said Monday that finding Hermond was a priority.

“We’re certainly making every effort to locate that individual,” he said.

At a press conference on Monday afternoon, Howard County Police Chief Gary Gardner said Hermond had been dining at a restaurant on Main Street in Ellicott City on Sunday when the flooding began. Hermond and others were working to secure the door of the restaurant to prevent water from coming in, when a woman approached to ask for help looking for her cat behind the building. Hermond and a few others went outside to assist her, Gardner said.

“Unfortunately, during that effort, they saw him go under the water and not surface,” he said.

Hermond’s friend Joseph Lopez told ABC News that he had been with Hermond at the restaurant. “It happened so fast,” Lopez said of the flooding. “The main street became a river in less than 20 minutes.”

He said Hermond lost his balance outside and was swept away by the current. “Eddison is a great swimmer so I’m hopeful that he will be OK,” Lopez told ABC News.

Officials at Monday’s press conference said that although there were about 300 rescues conducted in hazardous areas impacted by the flooding, other people have sustained only minor injuries thus far.

How bad is the flooding in Ellicott City?

Officials said the damage in Ellicott City appeared to be worse than damage in July 2016, when another flash flood devastated the Ellicott City community. Ellicott City, located about 12 miles west of Baltimore, is prone to flooding with the area’s Patapsco River running through the town.

Ellicott City received nearly 8 inches of rain over a six-hour period on Sunday, most of which fell during an intense three-hour window, creating a “true flash flood,” meteorologist Mike Muccilli told the Associated Press.

“They say this is a once every 1,000-year flood and we’ve had two of them in two years,” Gov. Larry Hogan said at a press conference Sunday night.

Commuters are rescued from a flooded car on Columbia Pike after a flash flood in Oakland Mills, Maryland, USA, 27 May 2018. The National Weather Service stated as much as 9.5 inches of rain fell in the area. Flash floods ravage Maryland, Oakland Mills, USA - 27 May 2018
JIM LO SCALZO—EPA-EFE/REX/Shutterstock

“My heart is broken, thinking about what the people are going through here — and the people’s lives who were devastated two years ago, and they rebuilt and now they’re faced with the same daunting task again,” Kittleman said at Sunday’s press conference. “We will be there for them, as we were in 2016. But I have no words to say to you and to them right now. I’m devastated. I’m heartbroken, and I know they are as well.”

The occurrence of another flash flood within two years of the devastating 2016 flood sparked questions about whether officials should have done more to prevent the latest disaster.

“I think Ellicott City was as prepared as it could be. When you have rain coming down as high as 8 inches or more over a certain period of time, terrible things happen. We saw that in 2016,” Kittleman said Monday. “Something like this is so devastatingly strong, it’s difficult to handle.”

Law enforcement officials said they were still working to secure the Ellicott City area on Monday morning before allowing residents and business owners to return to their property, reclaim belongings and assess the damage. As of Monday afternoon, the National Weather Service had extended a flood warning in northwestern Anne Arundel County and southeastern Howard County Maryland until 5 p.m. Monday.

“We need to ensure the area is safe,” Howard County said in a tweet.

A flooded car on Columbia Pike after a flash flood in Oakland Mills, Maryland, USA, 27 May 2018. The National Weather Service stated as much as 9.5 inches of rain fell in the area. Flash floods ravage Maryland, Oakland Mills, USA - 27 May 2018
JIM LO SCALZO—EPA-EFE/REX/Shutterstock
More Must-Read Stories From TIME
Subscribe to TIME 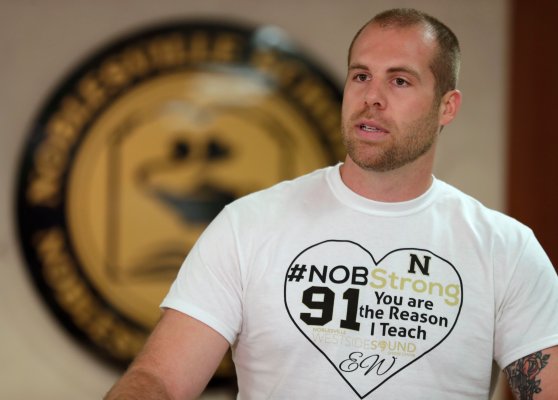 'Hero' Indiana Teacher Says Confronting School Shooter Was ‘the Only Acceptable Action’
Next Up: Editor's Pick