Translating Trump and Kim: Spare a Thought for the Interpreters at the June 12 Summit

When former South Korean President Kim Dae-jung traveled to the U.S. to meet former President George W. Bush in 2001, relations between the two men were already tense. At a joint news conference shortly after their meeting, Bush praised his South Korean counterpart’s approach to reconciliation on the Korean peninsula. “Let me say how much I appreciate this man’s leadership in terms of reaching out to the North Koreans,” the then-U.S. President said.

But instead of smoothing relations, Bush’s chummy tone deepened the rancor. Interpreters translated Bush’s casual reference to “this man” literally (이 사람). In a language with distinct forms depending on whom is being addressed, Bush’s informal reference struck many in Seoul as shockingly rude.

The stakes for U.S. President Donald Trump’s historic summit with North Korean leader Kim Jong Un are considerably higher. Their unprecedented meeting Tuesday comes after a year in which Trump threatened to “totally destroy” North Korea and Pyongyang demonstrated it had missiles capable of striking “everywhere in the world,” according to U.S. Defense Secretary James Mattis.

Jenna Gibson, Director of Communications at the Korea Economic Institute of America (KEIA) tells TIME that even absent of such bombast, the potential for misunderstanding between the two leaders is high. “There are very nuanced differences between words and between levels of formality in Korean,” Gibson says. “I don’t envy the translators at the summit, because they are going to have to make split-second decisions.”

On Sunday, Bloomberg reported that Trump would initially meet Kim one on one, with only the pair’s translators present. Here’s more on the challenges the interpreters could face.

The short answer is nobody knows for sure.

As a teenager, Kim reportedly attended a state-run school near the Swiss city of Berne, under the alias Un Pak. The language of instruction at Kim’s school was German but the dictator-to be also studied English and, according to Vanity Fair, scraped a minimum passing grade in the subject. Rather than academic studies, his former classmates have claimed, the young Kim was drawn to video games and basketball, and decorated his room with Chicago Bulls memorabilia.

In fact, former Bulls-star Dennis Rodman has traveled to Pyongyang and met Kim several times. Dr. Lonnie Edge, assistant professor at Hankuk University of Foreign Studies’ Graduate School of Interpretation and Translation, says that on his second visit, Rodman’s trip was arranged through a tour company set up by a Canadian speaker of North Korean. The Canadian, Michael Spavor, ended up serving as the pair’s personal interpreter.

“The fact that a non-VIP foreign civilian was allowed that close to Kim Jong Un shows that there’s a certain level of discomfort on the part of Kim in speaking English,” says Edge, who is also the managing editor of the journal, North Korean Review. “Kim had the chance to speak to one of his childhood idols and he didn’t really engage in direct conversation.”

Spavor did not return TIME’s request for comment on the trip.

Analysts are skeptical that Kim would agree to relinquish his nuclear weapons, but according to former U.S. national foreign policy advisor and North Korea expert Dr. Victor Cha, the optics of the June 12 summit are likely to be good. Cha told TIME last month that he did not expect a comprehensive deal to be reached but Trump “never has a bad meeting.”

Images from the G7 summit on June 8 and 9, suggest that’s not quite the case. But, death grip handshakes aside, Trump has so far been gushingly polite in his dealings with Asian leaders.

Nevertheless, as the Daily Beast reported in March, there is a “non-zero” chance the June 12 summit could descend into childish name calling. It was not long ago, after all, that Kim was calling Trump a “dotard,” and Trump referred to the North Korean leader as a “fat toad.”

Should such shade be thrown, Hankuk University’s Edge says it’s unlikely Kim’s interpreters would translate it literally. All citizens of North Korea are expected to defend the image of their leader and would insert the appropriate honorifics as a matter of course: “There are so many media reports that people have gone to prison in North Korea for less. I don’t know if that interpreter wants to risk that.”

Ha Yeon Kim, who has interpreted for TIME, says that while she was translating the 2016 U.S. presidential election campaign into Korean for Seoul television station Munhwa Broadcasting Corporation (MBC), she was surprised by the often “very non-presidential” language Trump directed at Republican candidate Jeb Bush and others.

“I would not translate directly what he said, because it would be too aggressive” she says. “I would kind of trim it. Of course, the message is being delivered but in a more formal way.”

How about if they play nice?

After Kim met South Korean leader Moon Jae-in on April 28, many in Seoul remarked on the North Korean leader’s curious “Swiss-influenced” Korean accent, and also how at ease he looked with his southern counterpart.

Kim’s unexpected charisma — his impromptu invitation for Moon to hop across the border, and his jokey apologies about waking the President up with early morning missile tests — was so successful in rehabilitating his image in South Korea it even inspired memes and tweets comparing the dictator to a cute teddy bear.

KEIA’s Gibson says that although North Korean language tends to be highly formal, she would not be surprised if Kim displayed similar informality on June 12, for example, by joking about Trump’s Rocket Man moniker. “That would be a very smart move on Kim Jong Un’s part, to undermine anything that Trump could throw at him,” Gibson says.

Given the incentives for both leaders to present the Singapore summit as a personal victory, the most likely outcome is that they stick to the niceties. Even that could pose challenges. In April, Trump baffled journalists in Seoul when, in line with the thaw in their relations, he referred to Kim as a pretty “smart cookie (영리한 녀석).”

With reporting by Ha Yeon Kim/Seoul 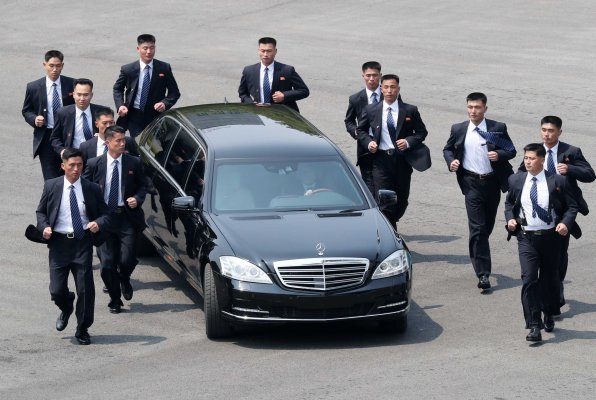