When Starbucks closes 8,000 stores nationwide on Tuesday, the coffee chain’s employees will receive a day of anti-bias training. Though this is just one day — and, as many have argued, a single day seems insufficient to deal with racial bias that is inculcated in the American psyche — the event exposes a complicated but important factor at play in centuries of American history.

The Starbucks move comes in response to an incident that took place last month at a Philadelphia store, in which two black male entrepreneurs who were waiting for a business partner to arrive were arrested after the manager called police because the men had not made a purchase. They were charged with deliberate trespassing and held in custody for hours but were released when the district attorney, amid public pressure, announced he would not pursue charges.

Since then, there has been a surge in media reports of similar incidents in which white people have called the police on blacks — and, in one instance, two American Indian brothers — merely for their presence in public spaces.

Implicit in these incidents of black bodies — which have been inscribed by history to be read as inferior and even criminal — “trespassing” in perceived “white spaces” are the legacies of de jure and de facto segregation, in which race and geography collide. The response given by police when a white female graduate student at Yale University called law enforcement on a black female graduate student who was napping in a common room was telling: an officer who demanded that the second student show them her university ID explained that “we need to make sure that you belong here.”

The question of who belongs where is a central component of the history of racism, and many scholars have theorized that this collision of race and space helps to codify the constructs of difference and the Other. For example, in her book Demonic Grounds: Black Women and the Cartographies of Struggle, Katherine McKittick demonstrates the intersections of geography and race stating, “Black Matters are spatial matters.” Her work challenges the notion that geography is apolitical. In other words, the history of racial bias in the United States is a history of geography underscored by settler-colonialism that, as McKittick observes, reifies a racial hierarchy that promotes ideas “that some bodies belong, some bodies do not belong and some bodies are out of place.”

Rashad Shabazz also explored issues of spatialized difference in his book Spatializing Blackness: Architectures of Confinement and Black Masculinity in Chicago. He argues that space has become racialized and gendered via constraints “built into architecture, urban planning, and systems of control that functioned through policing and the establishment of borders literally and figuratively create[ing] a prison like environment.”

In few places is this tension clearer than in Philadelphia, right in the neighborhood where the Starbucks incident took place.

At the turn of the 20th century, W. E. B. DuBois’s seminal study The Philadelphia Negro explored the city’s Seventh Ward, which “stretched along a narrow strip west from Seventh and Lombard streets to the Schuylkill River, bordered by Spruce Street to the north and South Street to the south”; it was the hotbed of black life and culture. Although the area had a reputation for “filth, poverty, and crime,” Du Bois found a nuanced and complex community of African Americans, some locally born and others southern transplants trying to eke out a living. While some blacks beat the odds, becoming doctors, lawyers, businessmen, teachers, barbers and caterers, “a fresh wave of immigration from Europe would arrive and undermine the black middle class as it was emerging.” As Du Bois noted, these immigrants also displaced the coveted domestic positions held by blacks on Rittenhouse Square.

The federal “urban renewal” program of the 1950s and ‘60s opened urban areas such as the Seventh Ward to developers, which in turn increased its real estate values as the black population sank from 30% to 7%. As displaced blacks relocated to other areas of the city, the general area once known as the Seventh Ward was divided into three sections, a portion of which incorporated the surrounding area of the park — and includes 18th and Spruce Streets, the home of the Rittenhouse Square Starbucks. It “is now an upper-middle-class community” stated sociologist Elijah Anderson in the foreword to the 2010 edition of DuBois’ book, “comprised of assimilated white ethnics” where “a strong caste line still exists.” It is an area that blacks pass through but where they seldom linger.

In other words, though the neighborhood has a long history as a home to the city’s African American population, it has become one of the places where they do not “belong.”

Likewise, Craig Steven Wilder, in his book Ebony and Ivy: Race Slavery and the Troubled History of America’s Universities, noted that Yale University as founded in 1701 relied on a slave-worked plantation. In 1834, though he was only allowed to audit classes, James Pennington, a fugitive slave, became the first African American to study at Yale Divinity School. Yale enrolled its first black student at the medical school in the 1850s; the first black student to enroll in Yale College was in 1870. It was nearly a century before Yale increased its efforts towards the admission of African Americans in any substantial way. By 2016, the percentage of African Americans at Yale was 7.1 %. This is a space founded on whiteness.

Similarly, Colorado State University, where two Mohawk students were recently detained by police during a campus tour, was founded in 1870 during the period of intensified attacks on the tribes of Colorado. The university is less than 300 miles from the Southern Ute Tribe reservation, established in 1881. Indians reservations are an extreme example of the way geography and race intersect, as they became the legal means to spatialize indigeneity, based on the doctrine of Manifest Destiny, which justified the further expansion of American territory on the bases of race and religion. While most American Indians currently live in urban and suburban areas, their being “off the reservation” can subject them to both micro- and macroaggressions similar to the CSU incident. As American Indian Michelle Lot stated during an interview with The Guardian, “I can’t find a spot that the government tells me I’m not trespassing on.”

Race and geography are twin forces that have shaped American culture since the colonial era, long before “white only-colored only” signs dotted the South. The impact of those forces continues to this day and will take more than one day’s training at one company to uproot and dismantle. Indeed, it will require the effort of an entire nation. 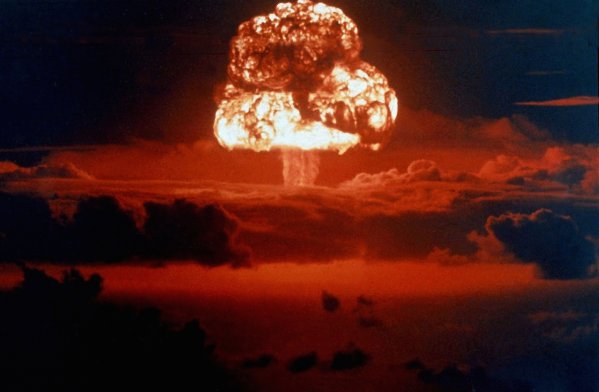 How the 'Compulsive Secrecy’ of the Atomic Age Has Changed the Way We Think
Next Up: Editor's Pick