Donald Glover's Lando Calrissian Is the Best Part of Solo

The ending of Solo, the newest Star Wars spinoff, makes it pretty clear that Disney is planning a sequel—or even multiple sequels—about the swaggering smuggler’s early days.

Which is fine. Just please let one of those movies be a Lando Calrissian spinoff.

Donald Glover, who plays a younger version of the beloved character, steals Solo. This will come as no surprise to anyone who has watched his brilliant TV series, Atlanta; streamed the just-released “This Is America” music video or laughed at his SNL monologue. But Glover was born to play Calrissian. He has mastered the Billy Dee Williams voice, and the man can wear the hell out of a cape.

In the context of the prequel, he’s asked to model the cockiness that Han Solo will later mimic. But he does so without the gruff behavior Solo later uses to put off potential friends or mentees. Lando is open and slick. TIME’s film critic, Stephanie Zacharek, put it best when she wrote, “Glover has an unruly, charismatic elegance.” He’s flirting with everyone in the movie—the humans, the droids, even the audience—and its utterly delightful.

There’s a reason for that: Solo co-screenwriter Jonathan Kasdan recently said that he believed Lando was pansexual. “There’s a fluidity to Donald and Billy Dee’s (portrayal of Lando’s) sexuality,” he said. “I mean, I would have loved to have gotten a more explicitly LGBT character into this movie. I think it’s time, certainly, for that, and I love the fluidity—sort of the spectrum of sexuality that Donald appeals to and that droids are a part of.”

Glover agreed. How can you not be pansexual in space?” he told SiriusXM’s Entertainment Weekly Radio program. “There are so many things to have sex with.”

Does this half-hearted attempt by Disney to nod at the possibility of an LGBTQ character count as representation? Absolutely not. As with LeFou in Beauty and the Beast last year or Dumbledore in Harry Potter years before that, writers claiming ex post facto that a character has a certain sexual preference isn’t enough. Show, don’t tell.

But, future Star Wars scribes, you have the chance to write that LGBTQ character you did want to include. Give Lando his own film. You may just have to fight with Ryan Coogler and the Black Panther team over who gets to film with Glover first. 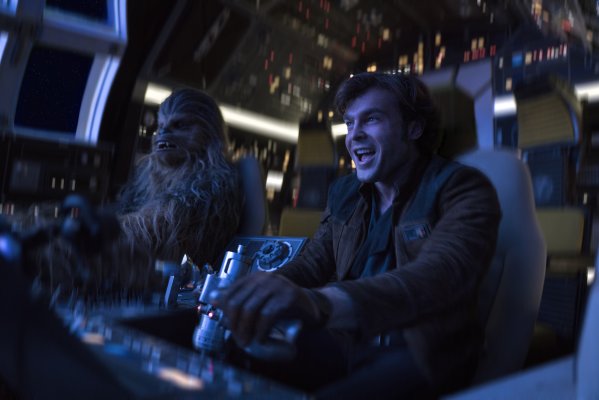 There's a Surprise Cameo in Solo. Here's What It Means for Future Star Wars Spinoffs
Next Up: Editor's Pick