‘They’re Really on Their Own.’ Santa Fe Reveals the Danger of Being a Substitute Teacher in Era of School Shootings

This story has been updated to remove quotations and information attributed to a man who identified himself as David Briscoe and said he was a substitute teacher at Santa Fe High School at the time of the shooting. After learning of questions surrounding his identity, a representative for the Santa Fe Independent School District told TIME Wednesday that it had no record of employment for anyone with that name.

Of the 10 people killed inside Santa Fe High School on May 18, two were teachers. And both Glenda Ann Perkins and Cynthia Tisdale were substitutes – standing in for a regular instructors who might have better known the school, the exits, the emergency procedures and the students whose lives were suddenly in peril.

Their deaths distilled a dilemma for substitutes across the country. As educators in the United States grapple with the chance a shooting could occur with preparations, training programs and drills, substitute teachers are often put in a precarious place. The classrooms they inhabit are foreign rather than their second homes. Sometimes, they aren’t given keys to lock a classroom’s door. Other times, the classroom doors lock automatically but they are unaware of proper protocol. Indeed, the possibility of having to escape or hide in an unfamiliar place at a moment’s notice presents an additional set of challenges for substitute teachers — not just for ensuring their own safety, but for protecting the lives of the students they just met.

“It’s a real concern for substitute teachers and for the students that they teach to have a teacher who is brand new to the school’s environment, may not even have the contact number for the school principal or the teachers next door,” said Tara Kini, the director for state policy at the Learning Policy Institute. “In a crisis situation, they’re really on their own in a classroom filled with students they haven’t previously met before.”

With two mass-casualty school shootings this year thus far, the layout of a classroom and lockdown procedures are on the top of the minds for some substitute teachers at each new gig. “We’re expected to go in there and do the same job,” said Ginger Swanson, a 44-year-old substitute teacher based in Ohio. “We should have access to the same tools and information.”

In addition to dealing with all the usual complexities of being a substitute teacher, educators like Swanson are also now being tasked with possibly risking their lives for around $107 a day on average, according to Indeed.

Any time Swanson walks into a new classroom now, she thinks: Is there more than one exit? What’s this building’s floor plan? Can I open that window? Can the kids fit out the window? Can I? Where does the window lead to? What could I use to barricade the door?

“You can’t just read your lesson plan and have a day with the kids,” Swanson said. “You have to keep [the potential for a shooting] in the back of your mind now.”

Swanson didn’t have these thoughts back when she began substitute teaching in 2012. She now wants schools in her counties to host orientations for substitute teachers so they can have a better sense of its protocols, lockdown procedures, layout and more.

Sayzie Koldys, a substitute teacher based in Maine who has taught along the East Coast over the last 20 years, has those thoughts now, too. A couple of years ago, the middle school she was teaching at for the day went into a lockdown. At that point, she realized she was unprepared for an emergency if one were to occur. “I’m focused on learning students names, best techniques for maintaining order when I don’t know students, and learning lessons so that I can teach them to students,” Koldys told TIME in an email. “I haven’t been focused on the best escape routes out of different areas of the building.”

The shooting in Santa Fe, she said, was a tipping point for her. At her teaching gig at a high school in Maine Wednesday morning, Koldys checked the window to see if she could easily unlock it to escape.

While schools often have binders filled with emergency procedures and evacuation plans in each classroom, substitute teachers told TIME the information can be a bit too general. At some schools, full-time teachers have started taking it upon themselves to include information on emergency protocols and lockdown tips on top of the lesson plans they leave behind, according to Grayson Bodenheimer, a substitute teacher based in Monroe County, Indiana. That began, he said, after an expelled student killed 17 people at Marjory Stoneman Douglas High School in Parkland, Florida, on Valentine’s Day this year.

A teacher’s concerns, Bodenheimer said, “are supposed to be about children’s growth — developing them into people, individuals, and to adults. And they’re having to be concerned about leaving detailed enough notes for a substitute just in case somebody decides to try to take these students’ lives.”

Floated by President Donald Trump after the Parkland shooting, the proposal of arming teachers with guns to take down school shooters did not sit well with some teachers and substitutes. Indeed, outside of emergency preparations or worries, many educators are struggling to make ends meet as the average salary for public school teachers falls, benefits dwindle, and class sizes grow. Many teachers take on second or third jobs, pay for their classroom supplies out of pocket — and some educators are quitting their jobs to find more lucrative sources of income. The teacher shortage crisis, as a result, has brought more substitute teachers and educators without the same qualifications as full-time ones into the classrooms. More than 100,000 substitutes and educators without full-time teaching certifications taught around the country from 2016 through 2017, said Kini of the Learning Policy Institute.

When theoretically thrown into a fast-moving, dangerous situation, the substitute teachers who spoke with TIME grappled with the moral quandary: Would I sacrifice my life to save a student I just met?

If Swanson, the Ohio-based substitute teacher, jumped in front of a kid to save them, she said, she would leave her own child motherless. Bodenheimer, who started substitute teaching in Indiana at the beginning of this school year, worries about his parents and his wife.

“It turns into almost this sick calculus of: If this situation comes up, whose potential lives are worth more?” he said.

Now, after Santa Fe, some substitutes want to leave their jobs. Running these calculations and watching school shootings time and time again take the lives of educators and students has presented an unexpected challenge. 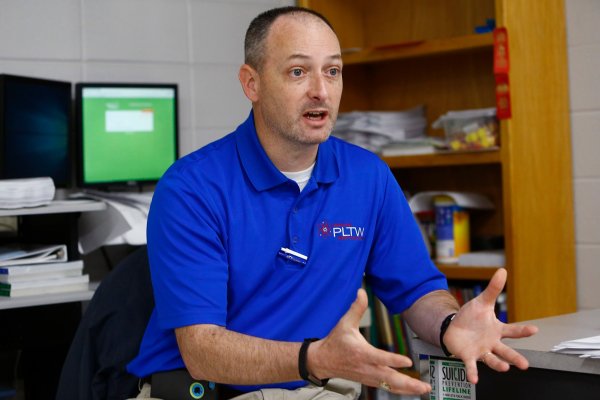 A Teacher Beat a Top Kentucky Republican in the Primary
Next Up: Editor's Pick