Since conflict erupted in the Central African Republic in late 2012 after the Séléka armed groups seized power from President François Bozizé, between 3,000 and 6,000 people have been killed, almost 700,000 people displaced and countless villages destroyed.

The country has been locked in violence ever since, as the mainly Muslim armed groups (formerly known as Séléka), predominantly Christian Anti-Balaka defense militias and other armed groups vie for authority.

Amid this deepening crisis, more than 14,000 children have been recruited by armed groups on all sides of the conflict. However, with roughly 80% of the country under the control of armed groups, the number is likely much higher and will continue to rise. Some children have been kidnapped. But many join “voluntarily” to protect themselves and their communities, or to seek revenge for the death of a loved one.

In May, when we visited Pissa, a village southwest of the capital, Bangui, to talk to the community about preventing recruitment, some locals were hardly surprised that children had taken up arms. “You had to protect yourself, [Séléka] came to rape even old women like me …how do you expect these children to react?” one woman told us.

While thousands have been involved in combat, children’s roles in conflict go far beyond the frontlines. Many are exploited as cooks, porters, messengers and spies. Girls often suffer horrific sexual and physical abuse.

The humanitarian and security situation deteriorated further in 2018 with at least 55,000 people displaced since January; 41% of children now suffering from chronic malnutrition. “Children are paying the highest price for this new surge of violence,” UNICEF said this month. “The world must not forget the children of the Central African Republic.”

Protecting children from such violence and preventing their recruitment and re-recruitment is a huge challenge.

The head of a volunteer child protection network in Bangui’s PK5 district—one of its most volatile and the scene of a church attack in May that killed at least 22 people—told us child recruitment remains prevalent.

In his area, there are at least 66 children, including four girls, tied to Muslim and Christian armed groups. Some of them had already been freed, but have since re-joined. According to UNICEF, around 12,000 children have been released since 2014. However, over 5,000 of these have not yet received any reintegration support.

Reintegration projects are often poorly funded. And projects focusing on vocational training or employment often fail as children are given neither the right materials or equipment, nor the full support they need to understand a trade.

Unlike other conflicts, the CAR crisis is unusual because most groups remain in the communities which they recruit from. This is especially so with Anti-Balaka groups: most are poorly equipped and disorganized, and emerged from their own communities to defend themselves. This means that even if children are freed, they are likely to remain under the influence of commanders and are at high risk of re-recruitment.

Contributing to this risk is the delay in demobilization, disarmament and reintegration support programs for adult fighters, a process that the government’s failed negotiations with armed groups has rendered long overdue. This means children remain in communities that are still armed and afraid, or struggling for either power or survival.

Our work in CAR is addressing this problem, and supporting community initiatives to prevent child recruitment. Our new illustrated booklet, created with local organizations, the government and the United Nations, was launched in May to help child protection actors understand the legal framework around child recruitment and advocate with armed groups for the release of children.

We also launched a community training tool to promote dialogue around the negative effects of child recruitment for both the child and the community.

CAR became the 167th country to ratify OPAC—the international child soldier treaty—in September 2017 outlawing the recruitment and use of children in conflict. While a positive step, implementing it in practice is almost impossible in the current climate.

May 25 marks 18 years since OPAC was ratified and while progress has been made and more than 115,000 child soldiers freed globally between 2000 and 2016, there is a long way to go.

As we know from the CAR conflict, freeing children from armed groups is just the first step in ensuring they can reclaim their childhood. 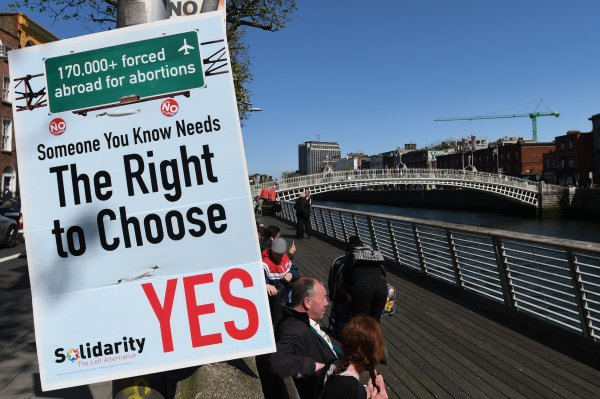 Why Men Should Stand With Women in the Ireland Referendum
Next Up: Editor's Pick