President Donald Trump suddenly announced Thursday he is pulling out of the meeting with North Korean Leader Kim Jong Un, ending – for now at least – the hopes of a historic reconciliation with the nuclear-armed hermit regime.

“Sadly, based on the tremendous anger and and open hostility displayed in your recent statement, I feel it is inappropriate, at this time, to have this long planned meeting,” Trump said in a public letter addressed to “His Excellency Kim Jong Un.”

The letter was sent one day after North Korea claimed it had demolished its nuclear test site, something Kim had said he would do in anticipation of the summit. But, according to the Associated Press, no international inspectors were invited to the demolition, raising questions about how serious the move was taken.

In the letter, Trump made sure to mention that the United States’ nuclear capabilities were far superior to North Korea’s.

“You talk about your nuclear capabilities, but ours are so massive and powerful that I pray to God they will never have to be used,” he wrote.

“The world, and North Korea in particular, has lost a great opportunity for lasting peace and great prosperity and wealth. This missed opportunity is a truly sad moment in history,” Trump concluded at the end of the letter.

The summit had been scheduled for June 12 in Singapore, but its fate had been in jeopardy following tough rhetoric from Pyongyang. Kim Kye Gwan, North Korea’s first vice foreign minister, said in a statement that North Korean leaders were considering cancelling the summit because they felt the U.S. was manipulating them into completely abandoning their nuclear weapons program. “We are no longer interested in a negotiation that will be all about driving us into a corner and making a one-sided demand for us to give up our nukes,” the statement read, according to the AP.

Reactions in South Korea were mixed, particularly given that Trump had floated the possibility of unifying the North and South into a single country just two days ago.

Jae Hye-Rim, 20, was smoking outside a convenience store in Seoul when the news broke late Thursday local time. She said that she was happy Trump had cancelled the summit, and doesn’t want unification because of the economic differences between North and South Korea.

But businessman Kwon Jae won, 47, said through an interpreter that this was an important time in the two Korea’s history. He doubted the sincerity of Trump’s cancellation, saying he thought it was a “fake political strategy.”

“This will say a lot to the East Asian eyes here, like Korea, Japan. I feel like people here have been worried Trump is just going to do whatever he wants,” a student at Seoul National University said after learning of the announcement from TIME.

Still, the student said, she and other young Koreans had grown cautiously optimistic that the summit could result in a historic peace.

Only days ago, Trump and Republican allies in Congress were suggesting that the President should receive the Nobel Peace Prize if the summit resulted in peace on the Korean peninsula.

The tensions between the two countries had begun to increase in recent days after Trump’s new National Security Adviser, John Bolton, compared the situation with North Korea to Libya. Libya’s former leader Moammar Gadhafi agreed to abandon the country’s nuclear weapons program in 2003 in exchange for sanctions relief. Gadhafi was overthrown and killed eight years later during the Arab Spring, which undoubtedly sparked fear in Kim Jong Un.

After Vice President Mike Pence reiterated in an interview on Fox News Monday that North Korea could end up like Libya if there was no deal on nuclear weapons, Choe Sun Hoi, North Korea’s Vice Minister of Foreign Affairs, called Pence a “political dummy” and threatened a “nuclear-to-nuclear showdown.”

South Korean President Moon Jae-in flew in to Washington earlier this week to try and salvage the meeting. But even as South Korean officials were expressing almost complete confidence the summit would happen, Trump was telling reporters there was a chance it wouldn’t. “We’re moving along. We’ll see what happens,” he said. “If it doesn’t happen, maybe it will happen later.”

Trump did not entirely close the possibility of holding a summit in the future, but told Kim Jong Un that he should write or call him should he change his mind. Trump also thanked him for releasing the three American hostages earlier this month, calling it a “beautiful thing.”

Read the full text of the letter below.

We greatly appreciate your time, patience, and effort with respect to our recent negotiations and discussions relative to a summit sought by both parties, which was scheduled to take place on June 12 in Singapore. We were informed that the meeting was requested by North Korea, but that to us is totally irrelevant. I was very much looking forward to being there with you. Sadly, based on the tremendous anger and open hostility displayed in your most recent statement, I feel it is inappropriate, at this time, to have this long-planned meeting. Therefore, please let this letter serve to represent that the Singapore summit, for the good of both parties, but to the detriment of the world, will not take place. You talk about your nuclear capabilities, but ours are so massive and powerful that I pray to God they will never have to be used.

I felt a wonderful dialogue was building up between you and me, and ultimately, it is only that dialogue that matters. Some day, I look very much forward to meeting you. In the meantime, I want to thank you for the release of the hostages who are now home with their families. That was a beautiful gesture and very much appreciated.

If you change your mind having to do with this most important summit, please do not hesitate to call me or write. The world, and North Korea in particular, has lost a great opportunity for lasting peace and great prosperity and wealth. This missed opportunity is a truly sad moment in history.

– With reporting by Joseph Hincks/Seoul 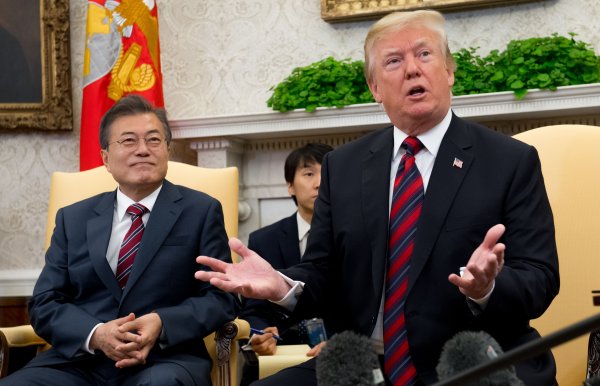 Trump-Kim Summit in Jeopardy
Next Up: Editor's Pick