Moon’s comments at the White House Wednesday came just hours before North Korea’s vice foreign minister threatened the U.S. with the prospect of an “appalling tragedy” and a “nuclear-to-nuclear showdown.”

“Moon told Trump that the inter-Korean dialogue, including high-level talks, may resume after Friday when the Max Thunder air exercises will be over,” Moon’s chief press secretary said, using a military designation for the air drills, the Korea Times reported.

Pyongyang pulled out of high-level talks with Seoul on May 16, blunting the optimism that followed Moon and Kim’s historic April 27 meeting, in which the latter pledged “a new era of peace” on the peninsula. Calling the joint drills a “provocative military ruckus” North Korea also said it would “reconsider” Kim’s planned June 12 summit with the U.S. if America tried to “force” its “unilateral nuclear abandonment.”

“In view of the remarks of the U.S. high-ranking politicians who have not yet woken up to this stark reality and compare the DPRK to Libya that met a tragic fate, I come to think that they know too little about us,” North Korea’s vice foreign minister Choe Son-hui said in a statement Thursday, using the acronym for the Democratic Republic of Korea, the North’s official name. “To borrow their words, we can also make the US taste an appalling tragedy it has neither experienced nor even imagined up to now.”

Speaking at a symposium at Seoul’s National Assembly, Christine Ahn, founder of peace advocacy group Women Cross DMZ, said that Choe’s comments reflected “how frail this moment is” and reaffirmed the urgency of demonstrating international solidarity with local peace efforts.

Ahn, who will visit the DMZ with a delegation of representatives from women’s peace organizations Saturday told TIME that the use of B-52 bombers and F-22 fighter jets in the joint air drills “was highly provocative and violated the spirit of the Panmunjom Declaration.”

Pyongyang has long regarded U.S.–South Korea joint military exercises a rehearsal for invasion and particularly objects to the inclusion of bombers. The U.S. dropped more ordinance on North Korea in the 1950’s than it did in the entire Pacific theater during World War II.

In April, however, the South Korean government said Kim had told visiting South Korean officials he “understood” the drills would take place.

There is nothing new about Pyongyang lurching between appeasement and blood curdling threats.

“The signaling is that, look, we can have a co-operative relationship based on reason and reconciliation, or you could have this hellish uncooperative, belligerent, hostile relationship. The messaging is that it’s up to you,” says Daniel Pinkston, an East Asia expert at Troy University in South Korea.

While Pinkston has described North Korean nuclear disarmament as analogous to “the Pope abandoning Jesus” he says that Moon, an accomplished diplomat, would be hoping that social interaction and engagement will persuade Kim leader he is not under threat.

In Washington, Moon told Trump he had “no doubt at all” that Kim was determined to discuss denuclearisation with the U.S President.

Trump meanwhile, “is applying the kind of tools and instruments and tactics in a local real estate market in NYC,” says Pinkston. But “with an international system there are no courts, there’s no third-party enforcer. It’s way over his head and it’s dangerous.” 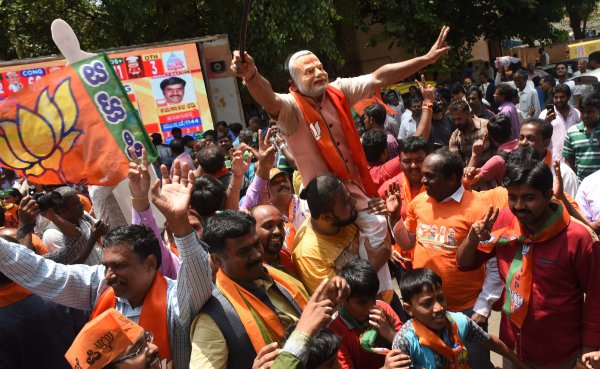 What a State-Level Contest Reveals About India's General Elections
Next Up: Editor's Pick