People who call themselves Dreamers, protest in front of the Senate side of the US Capitol to urge Congress in passing the Deferred Action for Childhood Arrivals (DACA) program, on December 6, 2017 in Washington, DC.
Mark Wilson—Getty Images
By Alana Abramson

An advocacy group backed by the Koch brothers focused on the Hispanic community is sending out a new round of mailers urging constituents to contact lawmakers on both sides of the aisle to support a comprehensive immigration bill.

Orchestrated by the Libre Initative, the mailers are part of a seven figure campaign by the Koch network to push Congress to act on immigration reform. The immigration plan the network supports includes a permanent solution for DREAMers — immigrants who came to the country undocumented with their parents when they were children — and $25 billion to enhance border security.

“Both Democrats and Republicans are responsible for reaching a permanent legislative solution for Dreamers,” said Daniel Garza, President of the Libre Initiative. “Acting now would unlock the potential of the Dreamers, promote economic opportunity, and strengthen our communities.”

Libre Initaitve and Freedom Partners Chamber of Commerce, another group backed by the Koch network, announced the 7-figure campaign last month. The launch of the campaign was accompanied by a television ad featuring former President Barack Obama, an anomaly for the network, which almost universally backs conservative candidates and policies.

The mailers target 20 lawmakers from both of sides of the aisle who represent 13 states, including House and Senate leadership from both parties: House Speaker Paul Ryan, who opposes lawmakers’ efforts to force a vote on immigration; Senate Majority Leader Mitch McConnell; Senate Minority Leader Chuck Schumer; and House Minority Leader Nancy Pelosi. Wisconsin Senator Tammy Baldwin is also targeted for the mailers, as are the two Senators representing Colorado, Nevada, New Mexico, Texas, and Virginia. “Tell [lawmaker] its time for a permanent bipartisan solution,” the mailer reads. It also includes a link to sign a petition from Libre urging action on immigration reform.

“We identified key members that we believe have an opportunity to play a positive role in enacting a solution for the Dreamers,” said Brian Faughnan, the Libre Initiative’s Communications Director, told TIME when asked how the lawmakers had been selected.

The mailers come as Republicans scurry to get the votes on a discharge petition that would force a series of votes on various immigration proposals in the House of Representatives, effectively bypassing House leadership, if it amasses the requisite 218 votes. As of Wednesday evening, it had garnered 205 signatures but only 21 were from Republicans. The majority of Republicans who have signed on, if they are not retiring, increasingly find themselves facing an uphill reelection battle where the fate of the DREAMers could be key in swaying votes.

For instance, the petition has been led by Florida Rep. Carlos Curbelo, whose Florida district voted overwhelmingly for Hillary Clinton in 2016 and who has been targeted by the Democratic Congressional Campaign. Other Congressmen who have signed on or are helping lead the crusade for votes include Reps. Jeffrey Denham, Mike Coffman, Will Hurd, and John Faso, all of whom are running for reelection in districts rated as toss-ups by the non-partisan Cook Political report.

In 2012, under an executive order from Obama, DREAMers were granted the opportunity to apply for a work permit, which shielded them from deportation. The program benefitted 800,000 people, according to U.S. Citizenship and Immigration Services, but their future now hangs in limbo. Trump announced last September he was phasing out the program, choosing instead to defer to Congress for a solution, but Congress has yet to act.

The Republican conference is supposed to convene on June 7, however, to discuss immigration, according to a senior House aide.

Last week’s mailers thanked lawmakers like Curbelo — although both sides of the aisle were represented — for their efforts to convince Congress to act. In total, both mailers are expect to reach 100,000 people, Faughnan said. He representative declined to provide a spending figure. 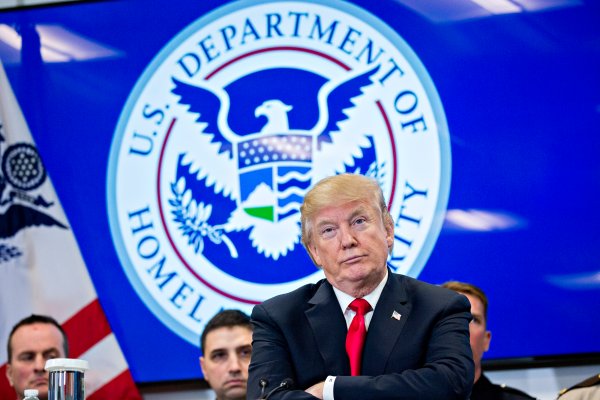