Drew Barrymore Has Some Feedback for Sarah Paulson on That Impression

Sarah Paulson is an award-winning actress, but that doesn’t mean Drew Barrymore is thrilled to have her imitate on her national television. Yet Paulson did just that on visit to The Tonight Show last September (watch here) and only later figured out that impersonating a famous actor may not have been a great idea.

“I didn’t realize how that could potentially be a problem because somebody might be a little offended,” the American Horror Story actor explained on Tuesday night’s episode of The Tonight Show. She had to re-think that, though, because Hollywood is a small town and they were bound to see each other eventually. “I ran into Drew Barrymore at Ellen DeGeneres’ 60th birthday party—and all of the sudden I had this white out in terror thinking, like, I did an impression of her on national television. She may hate my guts.”

Luckily, the potentially incredibly awkward situation was defused by Barrymore. “She didn’t [hate my guts]. She thought I was okay,” Paulson said, before breaking into yet another impression of the actor: “She was like, ‘Sarah that was such a good impression. I thought it was so, so accurate. I feel super honored. It was so sweet of you.’”

Hopefully Barrymore will continue to be okay with having an Emmy-winning actress impersonate her on the late night talk show circuit. 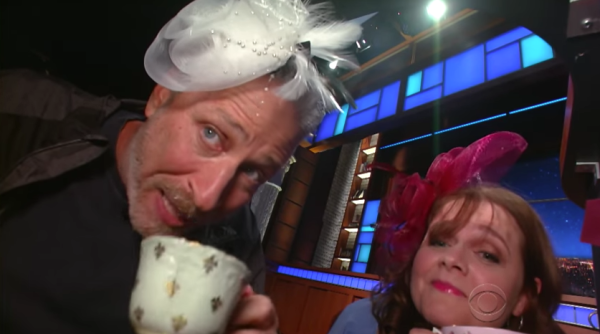 Jon Stewart Crashed 'Colbert' With a Royal Wedding Update
Next Up: Editor's Pick