'It Was a Mean One': A Hawaii Man Is Recovering After Almost Having His Leg Sliced in Half By a 'Lava Bomb'

Lava erupts from a Kilauea volcano fissure on Hawaii's Big Island on May 22, 2018 in Kapoho, Hawaii.
Mario Tama—Getty Images
By Jamie Ducharme

The first person seriously injured by Hawaii’s Kilauea volcano eruption is in high spirits just a few days after a “lava bomb” nearly sliced his leg in half, KHON 2 reports.

Darryl Clinton, who is from California but has lived in Kapoho for 12 years, told KHON 2 he was on the roof of a nearby home, trying to put out fires caused by volcanic debris, when he felt “the most forceful impact I’ve ever had on my body in my life.” Clinton soon realized he’d been hit by lava.

Doctors at Hilo Medical Center, where Clinton remains under medical care, were able to save the injured leg, KHON 2 reports — which makes him lucky. Officials told Reuters that the kind of “lava spatter” that hit Clinton “can weigh as much as a refrigerator and even small pieces of spatter can kill.”

Clinton is well aware of that fact. “It was a mean one,” Clinton told NBC News. “And I mean, it could have hit anywhere else and it would have been all over.”

Kilauea’s eruption continues to intensify, sending molten rock pouring into the ocean and creating a potentially dangerous lava haze, or “laze.” Dozens of homes have burned and thousands of people have been forced to evacuate as the eruptions continue. 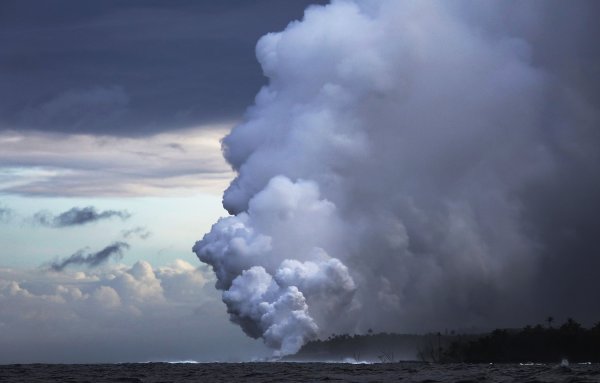 See Lava From Hawaii's Volcano Spew Into the Ocean and Create Toxic 'Laze'
Next Up: Editor's Pick