One Year After the Deadly Siege, Thousands of Filipinos Remain Displaced From Marawi

A woman stands amid the destruction inside Marawi city on May 10, 2018 in Marawi, Philippines.
Jes Aznar—Getty Images
By Laignee Barron

One year after the battle for Marawi began with a firefight between the Philippines military and a homegrown ISIS outfit bent on creating a caliphate, more than 230,000 residents of the southern city, or most of its population, remain displaced, according to humanitarian organizations.

The siege ended last October. And while President Rodrigo Duterte declared the capital of Lanao del Sur province free from “terrorist influences,” few have been able to move back to the ruins of their battle-scarred homes.

“Efforts to rehabilitate Marawi and assist its people must be stepped up to reduce the suffering of thousands of those who were displaced over the past year,” said Pascal Porchet, head of the International Committee of the Red Cross (ICRC) delegation in the Philippines. “The efforts are there, but these must match the growing needs of those who face prolonged displacement and are close to despair.”

Donations of food and supplies have dwindled as active fighting ceased. Yet livelihoods at makeshift evacuation sites are almost nonexistent, the ICRC said.

Five months of American-assisted airstrikes and a protracted ground conflict left Marawi a ghost town, riddled with unexploded ordnance. Martial law was imposed on Mindanao Island amid a threat of the militias’ replenishment and it has yet to be lifted.

For now, civilians have reportedly been allowed to return for only a day or two to retrieve whatever they can.

“It has been a year since the armed clashes began and we still don’t know what lies ahead. I’m starting to feel the weight of it, and there are times when I feel like giving up. But for the sake of my children, I strive to stay strong,” Diane Sumangan, an evacuee, told ICRC. Sumangan’s home is in Bubonga Marawi, one of 24 villages in the main area devastated by the clashes.

For the 65,000 people like Sumangan who lived near the flattened epicenter of the battle, ICRC expects their homecoming could be two or even three years off. Meanwhile a transitional site in Marawi has room for just 6,000 people and still lacks a water supply and a sewage treatment system.

“The ICRC remains committed to supporting those who fled the fighting… But, it is primarily the authorities’ role to assist people affected by conflict,” said ICRC’s Porchet.

Known as the “Islamic capital” of the predominantly Catholic Philippines, Marawi has been part of a long struggle for autonomy on Mindanao Island by various groups. While Duterte has pledged to rebuild the city with backing from China, resentments have festered.

“We don’t want the Chinese to come in and be paid to destroy our homes,” Haydee Dimalawang another evacuee told the New York Times. “This is our city, and we can rebuild it ourselves.”

Women show photos of their husbands who are still missing one year after the Marawi siege.
Ted Aljibe—AFP/Getty Images

For many, the search for missing relatives remains the most pressing focus. ICRC and the Philippines Red Cross say they are looking into cases for more than 100 families. Official counts estimate around 1,200 people including civilians, militants and security forces were killed in the violence. It’s unclear how many remain unaccounted for. 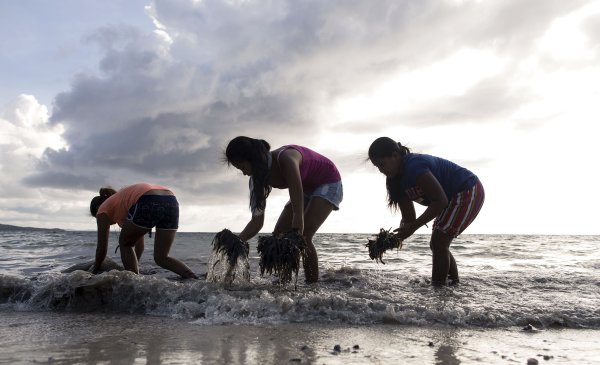