President Donald Trump has long called the special counsel’s investigation into Russian meddling in the 2016 election a “witch hunt.” But in recent weeks he’s sought to turn up the heat even more.

Earlier this week, Trump called for the Justice Department to investigate whether the FBI “infiltrated or surveilled” his presidential campaign in 2016, even meeting with FBI Director Christopher Wray and Deputy Attorney General Rod Rosenstein to discuss the issue.

Legal experts say that the president’s demand for an investigation into the investigation — as it were — marks a break with past practices in federal law enforcement.

“Trump has engaged over the past year and a half in a series of incremental transgressions of the norms of DOJ independence,” says John Bies, who worked in the Justice Department for nearly a decade under President Barack Obama and is now chief counsel at American Oversight.

This could all be part of a three-pronged political strategy to respond to the special counsel. Here’s an overview.

Making a case for firing Mueller or Rosenstein

Trump has reportedly considered firing Deputy Attorney General Rod Rosenstein, who currently oversees Mueller’s probe, or firing Mueller. On Tuesday at the White House, when asked if he has confidence in Rosenstein, Trump demurred, responding, “Next question, please.” And last month, the president tweeted about “the Fake & Corrupt Russia Investigation,” writing, “Mueller is most conflicted of all (except Rosenstein).”

By publicly accusing Rosenstein and Mueller of bias and corruption, Trump could be laying groundwork for firing either of them. It’s still an unpopular idea: A Quinnipiac University poll, conducted April 20–24, found that 74 percent of voters, including 59 percent of Republicans, oppose Trump firing Mueller. Just 13 percent of voters said they support it.

Trump put Rosenstein in a tough spot on Sunday when he demanded in a tweet that the Justice Department investigate the FBI’s motives for scrutinizing his campaign.

Rosenstein risked Trump’s ire if he didn’t respond, but it’s highly unusual for a president to intervene in a Department investigation in this way. Rosenstein put out a statement saying, “If anyone did infiltrate or surveil participants in a presidential campaign for inappropriate purposes, we need to know about it and take appropriate action,” and referred the matter to the Office of Inspector General.

Bies argues that was a mistake by Rosenstein, since “by referring unfounded and conspiratorial allegations to OIG, Rosenstein has really lent them the patina of credibility by responding to political pressure when there’s no real factual predicate for this investigation.”

But the move may have staved off a fight with the president for now. “There’s no doubt that Rosenstein is in a difficult position, and some argue that bending these norms to placate the president is a price worth paying to protect the Mueller investigation,” Bies continues. “But to protect the institution of DOJ there has to be a point where you’re willing to say no.”

In the first year of his investigation, Mueller has indicted 19 people on charges ranging from lying to the FBI to laundering money, secured five guilty pleas and revealed Russian influence tactics in the United States. There are still crucial unanswered questions in the investigation, and it’s not clear when Mueller’s work will conclude (though the White House often expresses hope that it will be soon).

Whenever Mueller does present his findings, however, Trump will have already attempted to sow doubt about the investigation. He has referred to the entire investigation as a “witch hunt,” claimed Mueller’s team is made up of Democrats and attempted to discredit FBI officials Peter Strzok and Lisa Page who, Vox reports, may be witnesses.

Whenever the probe concludes, Trump could “have a base of political support that’s already been persuaded to view the Mueller investigation with suspicion,” says Bies.

A handful of House Democrats have already started arguing it may be necessary to impeach Trump. But if the House of Representatives ever took that drastic step, it would likely be in response to particularly damning findings from Mueller’s team. (Trump lawyer Rudy Giuliani said that Mueller has concluded he cannot indict a sitting president, which would mean if his investigation finds criminal wrongdoing on Trump’s part, Trump would need to be impeached before he could be indicted.)

New York Congressman Jerrold Nadler, who would chair the House Judiciary Committee in a Democratic Congress, told the New Yorker that to successfully impeach Trump, “You have to have a situation where some appreciable fraction—not a majority, but an appreciable fraction—of the people on the other side will grudgingly admit by the end of the proceedings that ‘Yeah, they really had to do it.’”

The ultimate end game for Trump in discrediting the Justice Department may be protecting himself from being removed from office by playing to Republicans. “It’s most likely designed to further antagonize his base towards to the Justice Department,” says Jonathan Biran, a former federal prosecutor now at Rifkin Weiner Livingston. “The President may believe that will help him politically if he needs to rely on his base to mobilize against any kind of potential momentum for impeachment.” 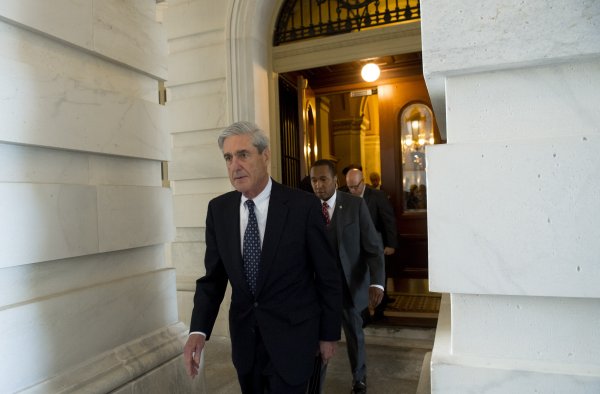 Here's How the Midterm Elections Could Affect Robert Mueller's Investigation
Next Up: Editor's Pick