John McCain's New Memoir Is All About Trump, Even When It's Not

It’s an old Washington tradition that when a new book on politics comes out, you flip to the index and look for your name.

If President Donald Trump were to pick up a copy of John McCain’s new memoir, “The Restless Wave,” he’d see that he doesn’t really come up much until the final chapters. But it would be a mistake to think that’s the only time McCain is talking about the president.

In fact, much of the book, which covers McCain’s 2008 presidential campaign, his work in Congress and his thoughts on foreign policy as he faces down a deadly form of brain cancer, seems to comment either directly or indirectly on Trump’s thoughts and actions as president. It’s like a book-length subtweet aimed squarely at Trump.

The book opens with a military parade for the 50th anniversary of the bombing of Pearl Harbor. But while Trump has long sought to showcase the might of American military hardware with similar pageantry, McCain describes his eyes welling up with tears as he reflects on the sacrifices of older veterans.

Later, he describes listening to a Gold Star mother with trepidation at a town hall meeting in New Hampshire, worried that she might resent him for his support of the Iraq War and the troop surge, only to have her ask if he’ll wear a bracelet honoring her son.

“I wore Matthew Stanley’s bracelet every day of the campaign, and I’ve worn it every day since,” he writes. “I’ll wear it for the rest of my life.”

McCain doesn’t mention that the current president of the United States managed to feud with not one but two Gold Star families: implying that Ghazala Khan — who was too overcome with emotion — did not speak at the Democratic convention because of her Muslim faith, then telling the widow of a service member killed in Niger that “he knew what he signed up for,” according to a Democratic congresswoman.

It’s not just military issues, either. His recounting of the 2008 campaign, which he lost, stands in stark contrast to Trump’s constant revisiting of the 2016 campaign, which he won. “There’s no use bitching about how you were treated in a presidential campaign after it’s over,” he says, in words that could be aimed directly at the current president.

McCain is candid about his mistakes, admitting he got too irritable at a debate with Mitt Romney because he was fatigued. He’s respectful of his opponents, noting that Barack Obama’s decision to forgo public campaign financing was “the prudent thing to do” even though he disagreed with it. And he’s charitable about circumstances that were beyond his control, arguing that the press gave Obama more “favorable attention” but noting that his campaign did, in fact, make for good copy.

“I didn’t like it,” he writes. “But given the media environment we live in today, where we can restrict information gathering to sources that tell us only what we want to hear, where crackpot conspiracy websites like InfoWars and Breitbart, and Russian propagandists such as Russia Today and WikiLeaks, are taken more seriously by their credulous followers than journalism practiced with professional standards and ethics, the problem of routine liberal bias in the media seems positively quaint.”

McCain doesn’t mention that Trump used to call InfoWars’ host Alex Jones, that he hired the former executive chairman of Breitbart as his chief strategist in the White House or that he benefited from material shared on WikiLeaks during the election, but it’s no coincidence that he chose those outlets to criticize.

Even when McCain does mention Trump, he’s careful to limit his criticism to observable facts. Recounting his role in receiving and then sharing with the FBI the controversial Steele dossier on possible connections between the Trump campaign and Russia, he notes that they are “unproven accusations,” even conceding that they might be “the product of slander or groundless fears,” for all he knows.

“I don’t know what is true, partially true, or not true in the dossier,” he writes. “I gave it to the people best equipped to answer those questions. Had I done any more, I would have exceeded my capability. Had I done any less I would be ashamed of myself.”

And when McCain hits Trump’s foreign policy vision—which he does, and hard—he pairs it with just as forceful of a critique of Obama’s views, though he conspicuously notes that he “never doubted the sincerity of President Obama’s conviction” that he was seeking a “safer, freer, and more just world,” a charitable reading that he does not repeat in his discussion of the current president.

He then lays into Trump in a series of paragraphs that read like the crescendo of a symphony, finally blaring out the theme the piece has been working toward.

“I’m not sure what to make of President Trump’s convictions,” he writes. “He threatened to deliberately kill the spouses and children of terrorists, implying that an atrocity of that magnitude would show the world America’s toughness. His lack of empathy for refugees, innocent, persecuted, desperate men, women, and children is disturbing. The way he speaks about them is appalling, as if welfare or terrorism were the only purposes they could have in coming to our country. His reaction to unflattering news stories, calling them ‘fake news,’ whether they’re credible or not, is copied by autocrats who want to discredit and control a free press. … Flattery secures his friendship, criticism his enmity.”

McCain’s cancer diagnosis has given him an enviable chance with this book to settle old scores, retell war stories and reveal what he was thinking during key moments in recent history. But it’s clear that what he’s most concerned about right now is the president of the United States. 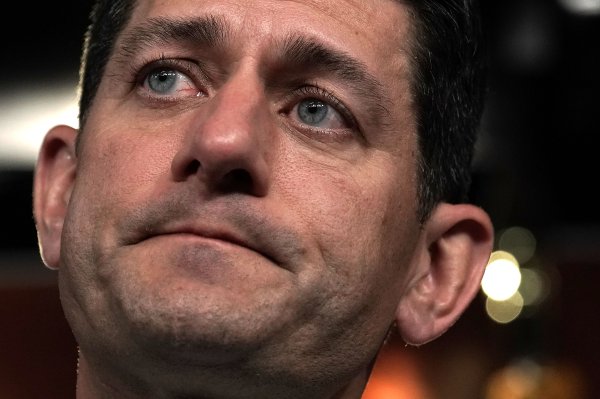 The House GOP Is in Chaos
Next Up: Editor's Pick