Princess Diana may be gone but is definitely not forgotten with Prince Harry and Meghan Markle finding many ways to pay tribute to his late mom during their royal nuptials – even in their wedding photographs.

The couple’s first official photos as a married couple were released by Kensington Palace on Monday and, on top of being stunning, gave the prince another chance to honor his mother.

The new Duke and Duchess of Sussex’s photographs featured their family members, including Queen Elizabeth, Prince Philip, Prince Charles and the bride’s mother, Doria Ragland and also a special detail that many people may have missed.

In a second photo released by the palace, Harry and Meghan are surrounded by their page boys and bridesmaids — many of whom were either related to one of them (Prince George and Princess Charlotte) or who were their godsons and goddaughters.

While Meghan sits on the floor of the Green Drawing Room at Windsor Castle, Harry sits on an emerald green couch, a couch that he sat on once before in another photograph marking an important milestone in his life.

The couch was the same couch in which Harry’s late mother was photographed sitting on while holding a baby Harry at his christening in 1984.

Diana sat beside the queen while Prince Charles rested on the antique furnture’s arm next to her. In the middle of the photo was a young Prince William in a white polo shirt and baby blue shorts as he grinned off-camera.

Harry found other ways to include his mother at the couple’s wedding. His wife’s wedding bouquet featured flowers from their private garden at their home in Kensington Palace that he picked himself. He also made sure to include Diana’s favorite flowers: Forget-Me-Nots.

Following their wedding ceremony, the couple stepped out on their way to their evening reception and Meghan was wearing an emerald cut aquamarine ring on her right hand which was Diana’s and is believed to have been a gift from Prince Harry.

The Duke and Duchess also made sure to keep Diana’s memory alive by creating a unique floral display in St. George’s Chapel, with an arrangement filled with branches of beech, birch and hornbeam, as well as peonies, foxgloves, and Diana’s other favorite flowers — white garden roses. 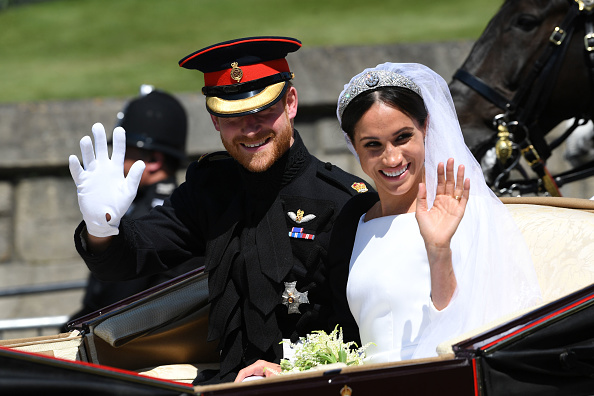 Here's What's Next for Meghan Markle and Prince Harry
Next Up: Editor's Pick