Ireland May Be About to Repeal One of Europe's Strictest Abortion Laws. This Is the History Behind the Referendum

The eighth amendment to Ireland’s constitution, which faces repeal in a national referendum on May 25, gives a mother and her unborn child an “equal right to life” and prevents any relaxation of the country’s near-total ban on abortion. This means that Ireland’s law on abortion is among the strictest in Europe and the world, though it does make some allowances for “risk of loss of life of pregnant woman.”

Though Friday’s contentious referendum could be a major milestone in the history of abortion in Ireland, this is far from the first time the majority-Catholic country has confronted the issue. The last 40 years have seen many twists and turns in both public attitudes and the law.

Here are the key moments to know:

While deliberately terminating a pregnancy has been a criminal offense in Ireland since 1861, the modern debate can be traced back to the 1970s, a time when regulations about abortion were changing in many places.

The U.K. had legalized abortion up to 28 weeks in 1967, and the U.S. Supreme Court had essentially legalized abortion in 1973 in Roe v. Wade. Alarmed by the trend, conservative politicians and the Catholic Church wanted to preempt any attempt to loosen the Irish ban. They launched an active campaign to introduce a constitutional amendment to that purpose, which culminated in a referendum in 1983. At that time, about 67% voted in favor of the eighth amendment — the very amendment up for repeal this week. “The State acknowledges the right to life of the unborn,” the amendment reads, “and, with due regard to the equal right to life of the mother, guarantees in its laws to respect, and, as far as practicable, by its laws to defend and vindicate that right.”

Some groups continued to protest the ban in the years following the referendum, but it was not until 1992’s X Case that the abortion issue exploded back into the spotlight. A 14-year-old girl, known in the media only as X, was raped and, realizing she was pregnant, decided to travel to the U.K. to have an abortion. Her family told police about the plan, to find out if they could do a DNA test after the abortion to prove the paternity of the girl’s rapist. Instead, Ireland’s Attorney General blocked her from traveling abroad via an injunction. The girl became suicidal and her case quickly made it to the country’s Supreme Court, which lifted the injunction and ruled that abortions could take place where there was a real risk to the life of the mother, including from suicide.

Since then, several attempts to remove suicide as grounds for abortion – including a referendum in 2002 – have failed. But the Supreme Court’s ruling did not make it into legislation for another 20 years.

The X case did lead to some change, though. Two referendums in November 1992 made it legal to travel abroad to seek abortions and to share information about foreign abortion services within Ireland. Some 170,000 women are estimated to have traveled out of Ireland for an abortion since 1980.

The death of Savita Praveen Halappanavar in October 2012 once again brought global media attention to the country’s strict laws on abortion.

Halappanavar, 31, was admitted to a hospital in Galway while having a miscarriage. She repeatedly asked staff to terminate her pregnancy but they refused, telling her that Ireland was “a Catholic country.” She died at the hospital, from severe sepsis, five days after she had started miscarrying. The case angered many who had previously been apathetic about abortion law and reinvigorated the abortion-rights movement in Ireland.

2013: Protection of Life During Pregnancy Act

The attention surrounding the Halappanavar case, as well as a 2010 ruling by the European Court of Human rights that Ireland was violating Article 8 of the European Convention on Human Rights by failing to enact the ruling from the 1992 X Case, spurred legislators to act. In 2013, they introduced the Protection of Life During Pregnancy Act, allowing abortions in circumstances where there was a risk to the life of the mother.

Since then, the United Nations Human Rights Commission has criticized Ireland’s abortion laws as “cruel and inhumane.” Prime Minister Leo Varadkar announced the referendum on repealing the eighth amendment a few months after entering office in 2017.

Polls suggest the result will be close. If the eighth amendment is repealed, Varadkar’s government will likely legalize abortion up to 12 weeks of pregnancy. 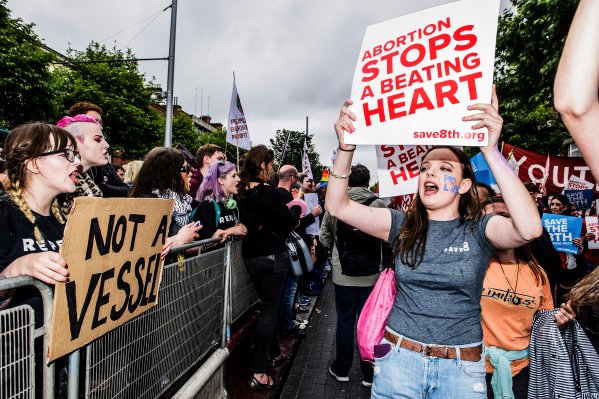