National Security Adviser John Bolton stands alongside US President Donald Trump as he speaks during a meeting with NATO Secretary General Jens Stoltenberg in the Oval Office of the White House in Washington, DC, on May 17, 2018
SAUL LOEB—AFP/Getty Images
By Charlie Campbell/Beijing

It turns out Kim Jong Un is still playing hard to get. When South Korean President Moon Jae-in arrived in Washington, D.C., on May 21, only two days had passed since he spoke by phone with U.S. President Donald Trump, in what has been seen by observers as a sign of the alarm felt by both leaders regarding North Korea’s threat to cancel the historic summit slated to take place in Singapore on June 12.

While Kim pledged a “new era of peace” at a meeting with Moon and returned three American detainees in a show of good faith, he is apparently infuriated by the tone White House officials are taking toward a negotiation he’d hoped would put the powers on a level field. His government nixed May 16 talks with Seoul–ostensibly over joint U.S.–South Korea military exercises–and hours later warned the U.S. “we are no longer interested in a negotiation that will be all about driving us into a corner.”

National Security Adviser John Bolton had particularly enraged North Korean leadership by suggesting the regime should follow the “Libya model” of nuclear disarmament. It will not have escaped Kim that Libyan dictator Muammar Gaddafi was toppled with Western backing and executed less than eight years after agreeing to abandon his nuclear program. White House press secretary Sarah Huckabee Sanders tried to walk it back, saying there wasn’t a “cookie-cutter” model for talks. But, asked about North Korea’s threat to pull out, Trump simply said, “We’ll see what happens.”

Pyongyang’s resumption of rancor means the Singapore summit risks turning into an embarrassment. The former reality-television star has trumpeted progress with North Korea as a counterpoint to his domestic travails. Chants of “Nobel! Nobel!”–suggesting Trump merits the famed Peace Prize for bringing Kim to heel–have followed the President around recent rallies. Trump has separately said that “everyone thinks” he deserves the award.

This makes South Korean officials nervous that Trump may give away too much to clinch a deal. Compounding matters, Trump “doesn’t think he needs to” prepare for the summit, a senior White House official told TIME. And another obstacle to success runs even deeper. The crux of the matter is what “denuclearization” means: for the U.S., it’s North Korea giving up weapons in exchange for nonaggression assurances and economic aid. For North Korea, it has always been about dismantling the U.S.–East Asian alliance system, removing American troops from South Korea and Japan and dismantling the U.S. “nuclear umbrella.” These are, and likely always will be, nonstarters for Washington.

One former top North Korean official, who has defected to the South and spoke to TIME on condition of anonymity, says Pyongyang wants the hawkish Bolton thrown off the U.S. negotiation team. He added that regime officials who are “meticulously planning” for the summit are perturbed by Secretary of State Mike Pompeo’s talk of “permanent, verifiable, irreversible” disarmament, which appears to go further than the U.N. definition. “If North Korea gives the U.S. an inch, it tries to take a mile,” says the former official. “North Korea believes it had to take action to remind everyone that it is Kim Jong Un calling the shots.”

Even if a deal is reached, the regime has reneged on previous commitments to denuclearize. That said, the fact that North Korea is fretting over the specific terms of negotiations offers a glimmer of hope that they intend, for the moment at least, to comply. And Kim’s stated refocus on improving the lives of his 25 million compatriots provides room for the U.S. to dangle economic carrots. “We always talk about how North Koreans hedge and cheat, but they always talk about how we democracies throw out the deals made by the last guy,” says John Delury, an East Asia expert at Yonsei University in Seoul. “I’m not sure their goal is just to manipulate Trump’s haste. It doesn’t solve the ultimate problem.” 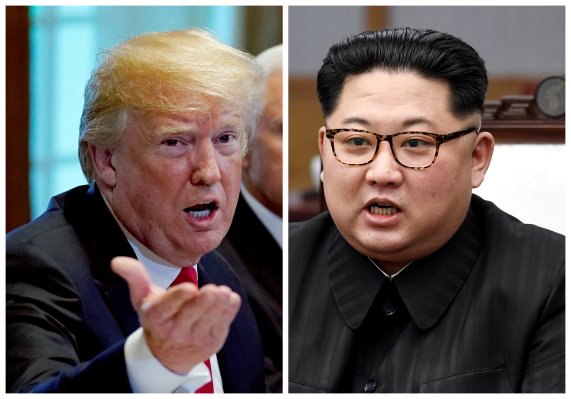 Trump to Kim: Cut a Deal and You Can Stay in Power
Next Up: Editor's Pick