Secretary of State Mike Pompeo demanded that Iran halt all uranium enrichment, stop its ballistic-missile program and give nuclear inspectors access to the entire country, in a speech detailing the U.S. approach now that President Donald Trump has withdrawn from the 2015 nuclear deal.

Pompeo’s list of 12 “basic requirements” if Iran wants relief from punishing sanctions Trump plans to reimpose brought a swift rebuff from Iran’s President Hassan Rouhani, who said that it was “unacceptable” for the U.S. to dictate to Iran and the world, and from a top official of the European Union.

The secretary of state’s speech Monday at the Heritage Foundation in Washington gave European leaders little reason to hope Washington will show flexibility in dealing with their companies that want to continue investing in the Islamic Republic.

Pompeo said Iran will continue to feel the “sting of sanctions” if its doesn’t change the “unacceptable and unproductive path it has chosen. These will be the strongest sanctions in history by the time we are complete.”

Asked how the U.S. will work with European nations to ease the impact of sanctions on their companies, Pompeo gave no ground.

“Anytime sanctions are put in place, countries have to give up economic activity,” Pompeo said, adding that U.S. companies have sacrificed business opportunities.

Rouhani scoffed at the demands from Pompeo, a former congressman who was previously Trump’s CIA director.

“That a man who has spent years working in a spying center, now — in the shoes of the foreign minister of the U.S. — wants to makes decisions for Iran and other countries is in no way acceptable,” Rouhani said, according to the Iranian Students News Agency. “Who are you to want to dictate to Iran and the world, and tell Iran what to do or not to do when it comes to nuclear technology?”

The administration billed the speech, Pompeo’s first policy address as secretary of state, as an articulation of Trump’s new strategy toward Iran less than a month after he ignored the pleas of U.S. allies and withdrew from the nuclear accord. Pompeo essentially demanded Iran’s total submission without offering anything in return aside from the hazy prospect of sanctions relief at some future date.

European nations, as well as Russia and China, are vowing to stand by the deal — formally known as the Joint Comprehensive Plan of Action — that Iran reached with six world powers and are trying to insulate their companies from the promised sanctions even though that’s an uphill effort.

“Secretary Pompeo’s speech has not demonstrated how walking away from the JCPOA has made or will make the region safer from the threat of nuclear proliferation or how it puts us in a better position to influence Iran’s conduct in areas outside the scope of JCPOA,” Federica Mogherini, the European Union’s vice president and foreign policy chief, said in a statement.“There is no alternative to the JCPOA.”

The new U.S. demands are so intrusive and broad that Iran’s rejection of them seemed all but certain even before Rouhani spoke. Other nations have agreed that Iran has the right to enrich uranium for peaceful purposes. The requirement that nuclear inspectors get universal access would include military sites — long a red line for the regime.

Read a QuickTake on the Iran nuclear deal Trump exited

Soon after the speech, a member of the Iranian parliament’s national security committee called Pompeo’s strategy nothing more than “U.S. dreams” and suggested the best thing to do was to wait for a change in position after Trump leaves office, whenever that may be.

“Iranians shouldn’t play into the challenges and U.S. radicalism,” Heshmatollah Falahatpisheh told the Iranian Students News agency. He said Iran would “allow for this era of extremism to pass.”

Pompeo’s demands included that Iran end its support for Middle East terrorist groups, withdraw its forces from Syria, stop backing Houthi rebels in Yemen and “cease its threatening behavior against its neighbors.”

“Relief from sanctions will come only when we see tangible, demonstrated, and sustained shifts in Tehran’s policies,” Pompeo said. “We acknowledge Iran’s right to defend its people. But not its actions which jeopardize the world’s citizens.”

The speech was a fresh example of the Trump administration’s maximalist with-us-or-against-us strategy that’s also playing out over North Korea’s nuclear program. In that crisis, the administration says it won’t accept a strategy of synchronized, step-by-step concessions in exchange for North Korea gradually giving into demands to give up its nuclear program. Instead, Trump wants North Korea to give up everything first.

Pompeo said that that if Iran meets the Trump administration’s demands the U.S. would end the sanctions, give Iran access to advanced technology and re-establish diplomatic and commercial relations.

“We are not asking anything other than that Iranian behavior be consistent with global norms,” Pompeo said. “and we want to eliminate the capacity to threaten our world with its nuclear activities.”

As for the consequences, Pompeo was vague, saying only that Iran would be met with “steely resolve” if it continues on its current course. He repeated Trump’s argument that Iran would have “bigger problems than they’ve ever had before” if they resume their nuclear program.

Pompeo pointedly noted that Supreme Leader Ali Khamenei has been in control since 1989.

“He will not live forever, nor will the Iranian people abide the rigid rule of tyrants forever,” Pompeo said. 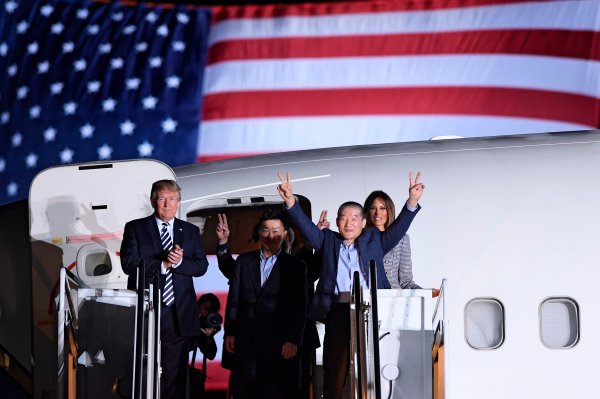 Who Are the 3 Americans That Have Been Released by North Korea?
Next Up: Editor's Pick