Castle Romeo was the code name given to one of the tests in the Operation Castle series of American thermonuclear tests beginning in March 1954 at Bikini Atoll.
Galerie Bilderwelt/Getty Images
By Fred Pearce

One sunny morning in September 1957, a line of military trucks drove down a narrow lane beside a lake in the foothills of the Ural Mountains, the chain that divides European Russia from Siberia. They stopped at a tiny village called Satlykovo. Red Army troops began knocking on doors and ordering the few hundred inhabitants to strip off their clothes, put on replacements unloaded from the trucks, and climb aboard. The villagers were being evacuated. They could not take any of their possessions, not even banknotes. As the evacuees bid a hasty goodbye to their worldly goods, the soldiers knocked down their homes to prevent them returning, and shot their cattle and pets.

The troops gave no explanation for the evacuation. They could not say — even if they knew — that a week before there had been an explosion in radioactive waste tanks at Russia’s biggest plutonium factory, in the nearby closed city known today as Ozersk. Nor could they say that the strange dark cloud that had descended on Satlykovo hours later contained the deadly fallout from the accident. Most likely it had been responsible for the death of Iran Khaerzamanov’s 10-month-old daughter, who had been in the garden with her grandmother when the cloud descended. She suffered severe diarrhea and died hours later. Her body was the last to be buried at the village cemetery.

The troops could not say any of this because the very existence of the nuclear-weapons complex was a military secret, known only to its fenced-in workers. Nobody outside was supposed to know — ever.

Sixty years later, on another bright, sunny morning, I became the first Western journalist to visit Satlykovo since the accident. I drove through a gate still guarded by armed troops and down a long rutted lane. I found the village, but the remains of the 75 hastily demolished houses were consumed by vegetation. Nettles were everywhere. The hot, sticky air was thick with giant dragonflies. Across overgrown fields, the lake had plenty of fish, though nobody was allowed to catch them. The encroaching forest along the track harbored elk, wild boar and foxes. Radioactive it may have been, but a barren wasteland it was not.

So started my journey to discovery the radioactive legacies of the nuclear age, an age I believe and hope is coming to a close. On this journey I explored the weird radioactive badlands created by nuclear accidents — some famous, such as Chernobyl and Fukushima, and some largely unknown, like the area around Satlykovo. I visited places where atomic bombs have been dropped, in the name of science or as acts of war, and where radioactive wolves roam but people fear to tread. I tried also to make sense of our many personal and collective responses to the unleashing of the power of the atom, to the sense of foreboding and the all-too-real threat that it could be used to annihilate us all. In many ways this new psychological landscape turns out to be the strangest place of all.

This is a personal journey too. I first became aware of nuclear technology during the Cuban missile crisis of 1962. I was 10 years old and preparing to walk to school when my father told me out of the blue that if I saw a mushroom cloud during morning break that day, I should go back into the classroom and hide under my desk. I recall being confused, not least because I didn’t quite know what a mushroom cloud looked like. Even so, during break I looked up at the sky for some time, just in case. I still remember the blue sky behind a big tree across the road, and a slight feeling of disappointment when no mushroom cloud appeared.

The realities of the nuclear age were new to everyone then: scary and somewhat secret, even to adults. At that age, I believed that adults knew everything; but about atomic stuff they were as much in awe and ignorance as we children. Growing up in southeast England, I would have been under an invisible radioactive cloud myself. It crossed the country after the fire at the Windscale plutonium plant in 1957. But nobody knew, because the cloud’s path was a state secret. The nation was told the cloud went out to sea and wasn’t very radioactive anyway. That was a lie, a lie told to adults as if they were children.

Like everyone else, my family back then was also paying for the privilege of living in the nuclear age. For the first couple of years of my life, every Briton had a ration card. It limited how much food we could buy. Rationing and austerity were what allowed bankrupt Britain to keep up with America and build its own atomic bomb. That felt good, except that having the bomb also made us sitting ducks if the Soviet Union — which got its atomic blueprints from the German-born British scientist and spy Klaus Fuchs — decided on a first strike. Or indeed a second strike.

Thankfully, nobody dropped a bomb in anger anywhere after the end of the Second World War. Only the Japanese suffered that fate as the war closed, at Hiroshima and Nagasaki. Even so, like the rest of the world in the 1950s and early 1960s, I breathed air infused with radioactivity from weapons tests in faraway places like Semipalatinsk, in Central Asia, and Bikini Atoll, in the Pacific. I also got to call the delightfully minimalist two-piece swimsuits worn by Brigitte Bardot and other exotics “bikinis.” Because the truth was that, when I was young, the world was at least as much seduced as it was terrified by the atomic age. It was à la mode. And if it didn’t blow us all up, atomic technology was going to transform our lives and, we were told, produce electricity that was “too cheap to meter.” That was then, but from the start this brave new atomic world carried the seeds of its own destruction. It hasn’t been, I think, so much the radiation or the explosive power but the secrecy and deceit that have dogged it ever since. “Too cheap to meter” was always a lie, of course. So too was the myth that somehow “atoms for peace” had nothing to do with atoms for war.

I have in front of me a booklet produced in 1954 by the British government’s Ministry of Supply — an Orwellian euphemism in itself, because it was actually a ministry of warfare — titled Britain’s Atomic Factories: The Story of Atomic Energy Production in Britain. It has a picture on the cover of the two Windscale “piles” then manufacturing plutonium as fast as they could for British bombs. Yet the 100-page booklet pretends for 99 pages that the piles were designed to produce “limitless energy.” They produced none. Only on the final page does it admit that their true purpose was to manufacture plutonium that “can be used as…the explosive in atomic bombs.”

Such duplicity, among governments across the globe, was routine. None of the tens of thousands of people drinking water from the tiny Techa River in Siberia in the 1950s were told that the river carried lethal quantities of radioactive waste from a bomb-making plant a few miles upstream, or that their doctors were secretly cataloguing the health impacts. People near Denver, Colorado, believed the official line that the factory with the bright lights up on the hill called Rocky Flats was making household chemicals rather than plutonium “pits” for bombs. And certainly nobody told them that they had been showered with the radioactive metal after a fire there.

From the Windscale fire in the U.K. to the Chernobyl disaster, from Rocky Flats to Three Mile Island in the U.S., and from Mayak in the USSR to Fukushima, that compulsive secrecy, deviousness, and lack of accountability have persisted, even as the technology has morphed from military to civilian uses. Nuclear subterfuge has eroded public trust, debate, and decision making alike.

That explains why it has spawned some of the most trenchant environmentalism. Greenpeace had its origins in the Don’t Make a Wave Committee, a group of British Columbians opposing U.S. nuclear tests under the seabed off the Aleutian Islands in the Pacific in 1969. The German Green Party, the forerunner of many others round the world, was as much about opposing atomic technology on German soil as cleaning up the Rhine.

The bunker mentality of nuclear engineers has been matched by the hysteria of some antinuclear campaigning. The Don’t Make a Wave Committee campaigned on the premise that the Aleutian tests would trigger an earthquake and a tsunami — something even the organizers admit they never thought would happen. Anyone looking for the origins of modern “post-truth” politics could do worse than analyze its nuclear forebears. It is no wonder that most of us never believe what we are told about anything nuclear and always think the worst.

However you view nuclear technology, it seems clear the world changed forever with the detonation of the first atomic bomb. From that moment on, the fate of the planet and of our species was in our hands — or more particularly in the hands of those people with their fingers on the nuclear button. It changed the way we think about many things. Globalization became a fact of life and death. No place was safe from “the bomb” and its fallout. The realization epitomized our new relationship with the Earth.

The atomic age plays to our guts and messes with our heads. Everybody has a view: for or against; optimist or pessimist; fear-monger or Panglossian technophile. It is not just because of the supreme power atomic energy brings. That is seductive or frightening, according to your temperament. There is also the radiation — unseeable, unsmellable, untouchable. It is like a ghost. We can make of it what we want, and we do.

Excerpted from Fallout: Disasters, Lies, and the Legacy of the Nuclear Age by Fred Pearce (Beacon Press, 2018). Reprinted with permission from Beacon Press. 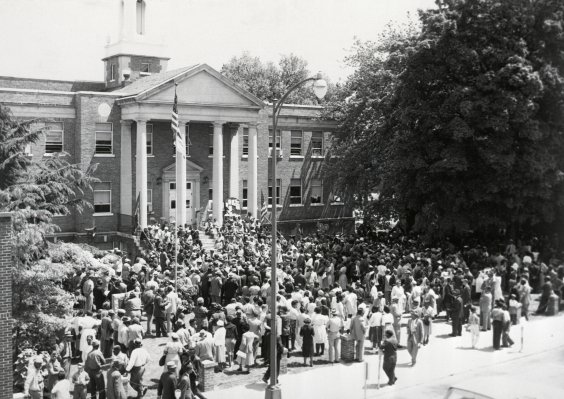 The County That Closed Its Public Schools Rather Than Desegregate After 'Brown v. Board of Education'
Next Up: Editor's Pick