Taylor Swift is finally back at an awards show — and serving up some serious sass.

During Kelly Clarkson‘s opening medley of nominees’ songs at the Billboard Music Awards on Sunday in Las Vegas, the Voice coach covered the Grammy winner’s hit “Look What You Made Me Do.”

When the camera panned to Swift, the superstar (sandwiched between her pals Shawn Mendes and Camila Cabello) was seen rolling her eyes, glancing at her nails and casually singing along before breaking out into laughter.

Her Swifties took to Twitter to voice their appreciation for the star, who hasn’t attended an awards show since the 64th Annual BMI Pop Awards in 2016.

The “Delicate” singer, 28, opted for an ethereal pink gown with a thigh-high slit and embellished silver details on the bodice by Versace for the annual show. She topped off her look with Casadei heels, Hueb earrings and rings by Fernando Jorge, Sara Weinstock Jewelry and Maxior.

Swift received a total of five nominations, including the top artist category for which she was up against Drake, Kendrick Lamar, Bruno Mars and Ed Sheeran.

The entertainer’s surprise appearance at the BBMAs comes one day after she performed two sold-out shows in the Los Angeles-area as part of her Reputation Stadium tour.

She surprised 60,000 fans at the Rose Bowl in Pasadena, California, by bringing out Shawn Mendes on Friday and shocked the crowds on Saturday when she shared the stage with another very special guest: Selena Gomez.

Swift will be back on the road on Tuesday when she performs at CenturyLink Field in Seattle.

Her Reputation Stadium Tour will see her play dates across North America, Europe and Oceania through November.

The 2018 Billboard Music Awards will broadcast live from the MGM Grand Garden Arena in Las Vegas on Sunday, May 20 on NBC. 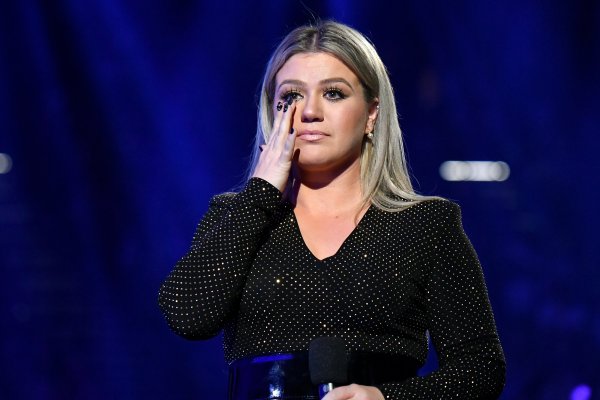 Kelly Clarkson Calls for Gun Action at Billboard Awards
Next Up: Editor's Pick