Veterans groups are rushing to defend a Democratic Congressional candidate in Kentucky after her opponent attacked her for not living in the state during her 20 years of military service.

Jim Gray, the Mayor of Lexington, Kentucky, who is vying for the Democratic candidacy in Kentucky’s 6th Congressional district, released the ad Friday – three days before the Democratic primary – against retired Marine Lt. Col. Amy McGrath. It highlighted the fact that she had not been living in Kentucky for the past two decades because she was in the U.S. Marine Corps.

“She’s lived around the country and the world while serving our nation. We’re all grateful for that,” the voiceover in the ad from Gray’s campaign says. “Now, she’s running for Congress to represent the one place she’s never lived: here.”

“We honor Amy McGrath’s service,” the ad continues. “But shouldn’t she live here for a while?”

McGrath, a Kentucky native, says she moved back to her home state shortly after retiring from 20 years in the military last June. She had previously been in Washington D.C. serving as a Marine Corps Congressional Fellow. The first female Marine to fly an F/A-18 fighter in combat, McGrath launched her Congressional campaign with a viral video that recalled her longtime desire to be a fighter pilot, and described how she persisted even though she was repeatedly told women were not allowed to hold such a position.

Gray’s campaign said in a statement to TIME that the ad was being misrepresented, and that, as a son of veterans, Gray had often defended McGrath’s service during the primary campaign.

“Washington political committees and Washington reporters might not know the difference between Northern Kentucky and Central Kentucky, but the people who live here do,” said Sam Young, an adviser to Gray’s campaign. “Jim has run this campaign talking about the things that voters are talking about, and Amy’s recent move to this district is one of those things.”

But veteran groups were quick to denounce Gray’s ad, viewing it as an implicit attack on military service.

“It would have been more comfortable for Lieutenant Colonel Amy McGrath to be in Kentucky all those years instead of the cockpit of an F-18 over the Middle East,” said Rye Barcott, a Marine Corps veteran and co-founder of With Honor, a non-partisan Super PAC that was founded to help elect more veterans to Congress.

With Honor also released a quote from General James F. Amos, the 35th Commandant of the U.S. Marine Corps, calling on Gray to remove what he categorized as a “shameful” advertisement.

“I flew with Marine Amy McGrath in Iraq. She is a patriot who’s faithfully served her country for 20 years, and now has the courage to throw her hat back in the arena to serve, again, this time as a member of Congress,” Amos said in a statement.

And VoteVets, a Political Action Committee that advocates for veterans, said in a tweet that Gray’s ad was akin to swift-boating, a term that emerged after the efforts in the 2004 election to discredit John Kerry’s military record during the Vietnam War and has become synonymous with unfair or false personal attacks.

“It’s military discrimination at best,” Jon Soltz, chairman and co-founder of VoteVets, told the Lexington Herald-Leader. “You cannot tell somebody not to hire somebody for a job because of their service to the country.”

Both VoteVets and With Honor have thrown their support behind McGrath’s candidacy. With Honor told TIME the group has spent nearly $200,000 on mailings, pollings and digital advertisements on McGrath’s behalf.

McGrath skyrocketed to national notoriety last summer after her viral ad announcing her candidacy for Congress. She and Gray are only two of six candidates competing in Tuesday’s primary, but they are viewed as the frontrunners. In 2016, Kentucky’s sixth Congressional district voted by double digits for Republican Rep. Andy Barr, but Democrats think they have potential to take the seat pending a wave of enthusiasm from the left.

McGrath said in a Facebook post that she found the ad a “very sad development,” but that it encapsulated why she was running for Congress in the first place.

“This is not just an attack on me. This is also an attack against any American citizen who chooses to serve their country in times of war and then come home to continue their service in another way,” she said in the Facebook post. “I am proud of the substantive and positive campaign that we have run, and it should serve as an example of what Democratic Party voters are craving right now.” 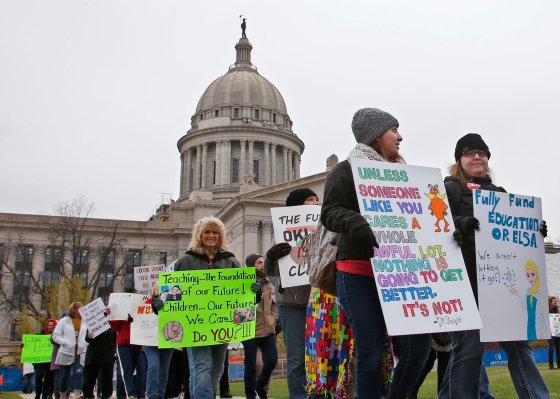 GOP Teachers Are Running Against Their Own Party
Next Up: Editor's Pick