Former Democratic presidential candidate Hillary Rodham Clinton encouraged students not to give up their sense of civic spirit during a speech at Yale University’s Class Day on Sunday.

She spoke frankly to the students during the event, which is part of the university’s commencement festivities, about graduating at one of the most turbulent times in the country’s political history, telling them to stay devoted to defending democracy.

Clinton did not shy away from the politic drama that has followed her since the 2016 election. She started her speech talking about the Yale tradition for graduates to wear over-the-top hats on Class Day, pulling out her own hat and saying, “I brought a hat too. A Russian hat. I mean, if you can’t beat ’em, join ’em,” to laughter from the crowd.

She spoke about the importance of resilience as the graduates move on to the real world.

“Everyone gets knocked down,” she said. “What matters is whether you get back up and keep going. You will make mistakes in life, you will even fail. It happens to all of us, no matter how qualified or capable we are. Take it from me.”

She also addressed the polarization of American politics and reminded students that empathy and politics can go hand in hand, saying she believes radical empathy is what it will take to overcome the divisive undertones plaguing the nation.

“The radicalization of American politics hasn’t been symmetrical,” Clinton said. “There are leaders who blatantly incite people with hateful rhetoric.”

She reminded the Yale students that change starts with them, congratulating them for already having demonstrated character, courage and resilience during a divided time for the country.

Imploring the graduates to vote, and even to subscribe to a newspaper or two, she said she believed keeping democracy healthy depended on standing up for reason and facts.

“We need to lean on each other,” she said, and “look for the good wherever we can,” telling the graduates she saw in them the skills needed to bring about change.

Clinton, who graduated from Yale Law School in 1973, has achieved many milestones for women in the public service sector. She became the only first lady to be elected to the U.S. Senate, as well as the first woman to be elected to statewide office in New York in 2000. After failing to capture the Democratic nomination for president in 2008 presidential election, she went on to become the first woman of a major U.S. political party to be nominated for president in 2016.

She is the fourth member of the Obama administration to speak at Yale’s Senior Class Day, following in the footsteps of former Vice President Joe Biden, former Secretary of State John Kerry and former United Nations Ambassador Samantha Power. She met her husband, former President Bill Clinton, while studying at Yale.

You can watch Clinton’s full remarks from Sunday’s speech here: 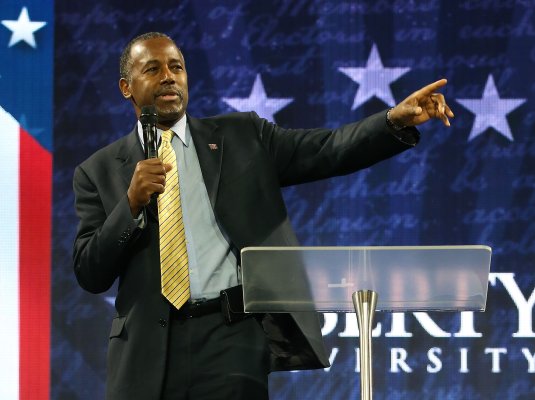 Ben Carson Tells Liberty University Graduates They Have 'Tremendous Spheres of Influence'
Next Up: Editor's Pick