Amal and George Clooney just wanted to watch Meghan, Duchess of Sussex and Prince Harry wed at the royal wedding on Saturday. But people online wanted them to pull off a heist.

The internet couldn’t help but surmise that and Amal and George’s color-coordinated, dashing outfits worn so close to glittering tiaras and the heirloom jewels made the Clooneys prime targets for some heist movie fan fiction. After all, George Clooney stars in the Ocean’s movie franchise that sees Danny Ocean (originally played by Frank Sinatra) leading a crew to swindle “the take” from Las Vegas casinos.

Jokes that the Clooneys would swindle the British monarchy when they least expected it abounded. A number of users online cracked that George Clooney was about to go full Danny Ocean.

One user even wanted to know where Matt Damon, who plays Danny Ocean’s recruit Linus Caldwell was.

See some of the George and Amal royal wedding memes below.

But con artistry was just an internet fantasy. What the couple did accomplish was a memorably regal entrance to the festivities. The international human rights barrister made a splash with her sunny getup and Stephen Jones disc hat. 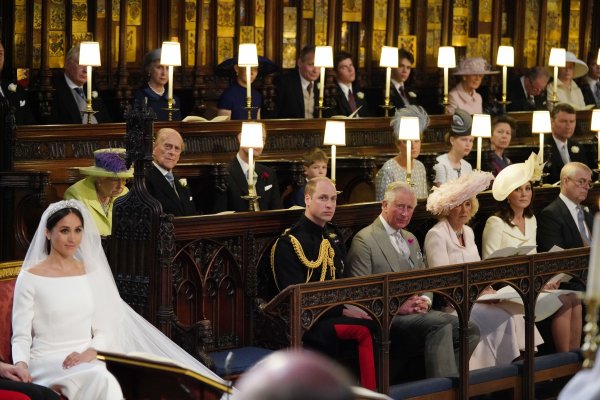 There's a Simple Reason Why There Was an Empty Seat at the Royal Wedding
Next Up: Editor's Pick